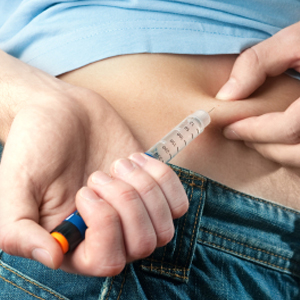 An early stage study suggests an experimental vaccine may be able to tame bits of the immune system that go haywire in people with type 1 diabetes, offering hope for a new way to delay or prevent the autoimmune disease, researchers said on Wednesday.

For more than four decades, scientists have tried different ways of manipulating the immune system to stop the destruction of insulin-producing cells that is responsible for type 1 diabetes. The disease affects as many as 3 million Americans.

Some prior attempts suppressed desirable parts of the immune system, leaving individuals vulnerable to infections and cancer. Several teams are now attempting more targeted approaches in an effort to delay or reverse type 1 diabetes.

Those with this form of diabetes currently must monitor their blood sugar and take insulin several times a day, but the treatment is risky – it can cause coma or death at any time and can lead to heart disease, nerve damage, blindness and kidney failure over time.

"What one really wants to do is tame or regulate the specific aspects of the immune system that have gone awry and leave the rest of the immune system intact," said Dr Richard Insel, chief scientific officer of JDRF, formerly known as the Juvenile Diabetes Research Foundation.

In the latest effort, published on Wednesday in the journal Science Translational Medicine, teams from Leiden University Medical Center in the Netherlands and Stanford University in California tested a vaccine genetically engineered to shut down only the immune system cells causing harm, while leaving the rest of the immune system intact.

"The idea here is to turn off just the rogue immune cells that are attacking the pancreas and killing the beta cells that secrete insulin," said Stanford Professor Dr Lawrence Steinman, one of the study's senior authors and co-founder of a company called Tolerion recently formed to commercialize the vaccine.

The study, done in 80 people diagnosed with type 1 diabetes who were receiving insulin injections, was designed to test the safety of the vaccine known as TOL-3021. The so-called DNA vaccine is made up of a small round piece of DNA called a plasmid that is genetically engineered to tamp down the immune response to insulin and preserve insulin-producing beta cells.

The vaccine targets a precursor protein in the blood called proinsulin. "It's a complicated series of snips and cuts in the DNA that take away the capability to stimulate the immune system," Steinman said.

"This effectively triggers an off-switch," he said.

After 12 weeks of shots given once a week, patients who got the vaccine showed signs that they helped preserve some of the remaining insulin-producing beta cells in the pancreas without causing serious side effects.

The vaccine also reduced the number of killer immune cells known as T cells. And patients who got the active vaccine had higher levels of C-peptides – a remnant of insulin production in the blood that suggests the presence of more working beta cells.

Steinman admits the vaccine is far from commercial use, but the study is promising enough to do a bigger study.

"So far, it looks like it is doing what we want," he said.

Insel said it was too early to say much about the vaccine's promise. "It looks like it has some potential, but very small numbers," he said.

"This was done initially as a safety and dose-finding study. They were surprised to get these kinds of results," he said.

Stanford has licensed rights to the vaccine to California-based Tolerion, which is designing a longer study in as many as 200 patients to test whether the vaccine can slow or stop progression of the disease in younger patients, before too much damage has been done.

Insel said the work is one of several efforts aimed at developing a vaccine for type 1 diabetes. Such a vaccine could help people with active type 1 diabetes preserve residual beta cells, giving them better control of their disease and potentially getting them off insulin.

Ultimately, the hope is to develop an effective vaccine that could be given to individuals who are genetically predisposed to develop the condition, he said.

The World Health Organization estimates that about 10 percent of the 350 million people in the world with diabetes have the type 1 variety – most have type 2, which is associated with obesity and lack of exercise.

We live in a world where facts and fiction get blurred
In times of uncertainty you need journalism you can trust. For 14 free days, you can have access to a world of in-depth analyses, investigative journalism, top opinions and a range of features. Journalism strengthens democracy. Invest in the future today. Thereafter you will be billed R75 per month. You can cancel anytime and if you cancel within 14 days you won't be billed.
Subscribe to News24
Related Links
Type 1 diabetes rising in small kids
Life with diabetes: I want to live until I'm 105
Next on Life
High-tech pacifier might monitor baby's blood sugar