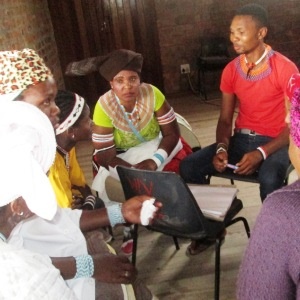 The City of Cape Town’s Health Directorate is squaring up for the anticipated increase in the number of diarrhoea cases during November and May – particularly in children under the age of five who are most vulnerable to the disease.

City Health is an active participant in a well-developed Diarrhoea Season Plan which is aimed at prevention, early identification of diarrhoea with dehydration, and fast-tracking of cases that require hospital admission.

Where it is relevant, health officials also make an extra effort to engage with traditional healers in their areas to update them and bring them on board with early interventions.

This is the case in the Klipfontein, Mitchells Plain and Khayelitsha sub-districts. City Health officials have been engaging with traditional healers in these sub-districts by hosting training sessions.

Since the start of the season, a total of 38 traditional healers have been trained in the Mitchells Plain and Klipfontein sub-districts, with engagements in Khayelitsha set to start soon.

"Traditional healers are the first resort for many residents accessing healthcare and we have to respect that.

Read: Diarrhoea, one of the top killers of children

"It is therefore important that they too are well-equipped and understand treatment courses – for example, that laxatives and enemas are not advisable to be used in clients with diarrhoea."

City Health staff are meeting with various traditional leaders and hosting workshops with them outlining in detail what symptoms they should be on the lookout for when they are approached by a resident with a sick child or person.

There is no difference in the treatment – only the messaging that "early intervention is crucial in preventing fatalities".

The Oral Rehydrate Solution is also explained and encouraged by the staff to be administered when they are approached with a child or person with symptoms of diarrhoea and dehydration.

"We need to ensure that they are able to identify the danger signs of diarrhoea so that they can dispense appropriate advice to patients. We have worked very hard in recent years to reduce the number of children who die as a result of this preventable disease, but it remains a challenge," said the City’s Mayoral Committee Member for Health, Councillor Siyabulela Mamkeli.

The traditional healers have responded well to the training and have requested that more such sessions be held by the City Health. They have expressed a wish for City Health to collaborate with them on many other issues of common interest, not just on diarrhoea.

During the 2014/15 season, 25 602 diarrhoea cases were recorded at public healthcare facilities across the city, with 4,9% presenting with moderate dehydration and 1,7% with severe dehydration.

More than 50% of all cases were recorded between February and April, which is generally considered the peak period. This year’s season started with challenges: two weeks after the season had started, there were already 1,480 reported diarrhoea cases city-wide, with 38% of them occurring in Khayelitsha.

Read: Diarrhoea cure could save millions

A total of 27 diarrhoea deaths in children under the age of five were reported between November 2014 and May 2015. This season, one diarrhoea death was reported in the northern sub-district.

While diarrhoea is a common ailment, it is important to watch for signs of the dehydration associated with it, especially in young children, as dehydration can be fatal unless promptly corrected.

The aim of the training sessions with traditional healers is to facilitate a dialogue which will ultimately ensure prompt referral of diarrhoeal cases to the clinics.

"I am very enthusiastic about this initiative which empowers traditional healers with the correct information to assist with the proper treatment," said Councillor Mamkeli.

Environmental Health Practitioners also visit informal settlements on a weekly basis to monitor potential health hazards in the living environment and to educate residents on measures to reduce the spread of diarrhoea by minimising oral-faecal exposure.

It has been found that the simple activity of frequent hand-washing with soap and water is highly effective in preventing the spread of diarrhoea as well as respiratory infections.

"Children with diarrhoea should not be made to wait at the clinics. They need to report at reception and be fast-tracked for treatment immediately.

"I appeal to parents and caregivers to seek medical attention for their children immediately should they present with any of these symptoms, because delays in accessing care can be fatal," added Councillor Mamkeli.

Symptoms of dehydration in children include: passing little urine, a dry mouth, a dry tongue and lips, fewer tears when crying, sunken eyes, weakness, and being irritable or lethargic.

We live in a world where facts and fiction get blurred
In times of uncertainty you need journalism you can trust. For 14 free days, you can have access to a world of in-depth analyses, investigative journalism, top opinions and a range of features. Journalism strengthens democracy. Invest in the future today. Thereafter you will be billed R75 per month. You can cancel anytime and if you cancel within 14 days you won't be billed.
Subscribe to News24
Next on Life
Dehydration