5 contact lens horror stories that will make you squirm 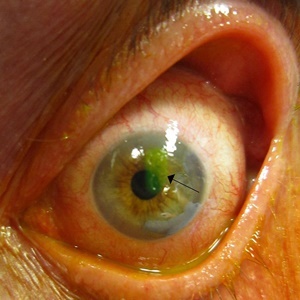 Doctors wanting to perform cataract surgery on a 67-year-old woman in Britain found something rather unexpected: 17 contact lenses mashed together in her right eye, and then a further 10.

Whilst this may be an unusual scenario, many people have got themselves into trouble simply because of problems with their contact lenses. We take a closer look at this and a few other horrifying contact lens stories.

In a case report published in the British Medical Journal, the doctors said that the woman had worn monthly disposable contact lenses for 35 years; she had "deep set eyes" and poorer vision in the one eye, which they said might have contributed to a failure to remove some of the lenses.

The doctors said the 17 lenses were bound together by mucus. A further 10 were found by the surgeon using a microscope.

During Halloween in 2015, a student from South Wales was hospitalised after her novelty contact ripped her cornea. 18-year-old Tia Goode dressed up as a leopard for Halloween and added cat-eye contact lenses to complete her look. When she came home from a night out, she tried to remove her contact lenses but found that they were stuck. After spending 45 minutes trying to get them out, Goode eventually pulled the contact out but managed to also rip out her cornea, the transparent layer covering her eye.

Man’s eye removed after contact lens infected by a parasite

In December 2016, paramedic Andrew Carthew from Cornwall made headlines; not for saving someone’s life, but after he was forced to have an eye removed after his contact lenses were infected by a parasite. Carthew woke up with a red, sore eye, according to the Daily Mail, and thought it was conjunctivitis. But soon after that he suffered severe pain in his left eye. It turns out a parasite was trapped between the lens and the eye, allowing it to curl up into the eyeball.

It’s often not enough to just take of your contact lenses; you must also be weary of the damage that can be done by unusual activities. According to the Daily Mail, Jennie Hurst wore monthly contact lenses and didn’t realise that swimming could cause be detrimental. In 2012 she went for a dip in the public pool and shortly afterward she went blind in her left eye — the result of a vicious infection. "I felt so guilty — if I’d known I’d have whipped them out in seconds and worn my glasses instead,” she told the British publication.

I am blind after handling my contact lenses with wet fingers

In 2011 Irenie Ekkeshis's one eye started to itch. At first she thought it was simply an irritation, but then he experience excruciating pain and suddenly lost the sight in the eye. According to the BBC, “within days she was told she had Acanthamoeba Keratitis (AK), a rare but serious eye infection caused by a micro-organism that's common in tap water, sea water and swimming pools”. Ekkeshis said she felt frightened. “By then I had lost the vision in my right eye. It was like looking through a foggy bathroom mirror. I could see colours and shapes but not much else,” she told the BBC.

We live in a world where facts and fiction get blurred
In times of uncertainty you need journalism you can trust. For 14 free days, you can have access to a world of in-depth analyses, investigative journalism, top opinions and a range of features. Journalism strengthens democracy. Invest in the future today. Thereafter you will be billed R75 per month. You can cancel anytime and if you cancel within 14 days you won't be billed.
Subscribe to News24
Related Links
Why chopping onions makes you cry
'Halo' effect common after Lasik eye surgery
Temporary blindness linked to smartphone use in the dark
Next on Life
Doctors find 27 contact lenses in woman's eye