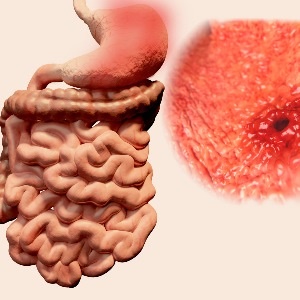 Peptic ulcers are a result of an imbalance between factors that can damage the mucosal lining of the gastrointestinal tract and this system’s natural defense mechanisms (e.g. the secretion of mucus and the healthy regeneration of cells).

Damaging factors include a bacteria called Helicobacter pylori, the overuse of non-steroidal anti-inflammatory drugs (NSAIDs) like aspirin and ibuprofen, as well as certain lifestyle factors.

Bile acids and pepsin (a digestive enzyme) are also aggravating factors. Pepsin can allow hydrogen ions to diffuse back into the mucosa with subsequent damage to the lining (epithelium).

Normally, the gastric mucosa uses defence mechanisms such as tight intracellular junctions, mucous, mucosal blood flow, cellular restitution and epithelial renewal to restore and protect itself from the low pH of the stomach acid.

Scientific breakthrough: H.pylori
Until the 1980s, it was believed that the major causes of ulcers were stress, the genetically linked secretion of excessive stomach acid, eating too much fatty, rich and spicy food, and drinking too much alcohol, coffee and colas.

It was also believed that certain personality types were more susceptible to peptic ulcers. The viewpoint was that all these factors contributed to the excessive production of stomach acid, which eroded the protective lining of the stomach and duodenum.

Research by Nobel Prize winners Barry Marshall and Robin Warren from Australia, conducted in the early 1980s, revealed the presence of a bacteria called Helicobacter pylori (H. pylori) in the stomachs of most people with duodenal ulcers (i.e. ulcers in the top section of the small intestine). Eradication of this bacterial infection healed the ulcers and prevented recurrent ulcers from developing.

Scientists now know that about 90% of all duodenal ulcers and 70% of gastric ulcers are caused by the spiral-shaped bacteria, which manage to survive the highly acidic conditions in the stomach. H. pylori has been shown to weaken the protective lining of the stomach and duodenum by digging into it, letting stomach acid through to its inner layers, and causing infection.

Peptic ulcers can, however, also be caused by regular use of NSAIDs. These medicines disrupt the production of an enzyme that protects the lining of the stomach and duodenum, making the protective lining vulnerable to injury.

Lifestyle factors such as smoking and excessive alcohol use may worsen symptoms. Note, however, that alcohol doesn’t cause ulcers. It merely irritates the gastric mucosa, which results in gastritis that might be so severe that you may vomit blood (but not enough to merit a blood transfusion). Alcoholic gastritis might clear up within 24 hours if you stop drinking alcohol.

In a large study with 47,000 male participants, it was found the smoking doesn’t cause peptic ulcers. Smoking only increases the risk for a peptic ulcer in association with H. pylori infection. However, smoking retards the healing of peptic ulcers.

Emotional stress is still frequently cited as a contributor to peptic ulcer disease. An interesting Japanese study demonstrated a rise in bleeding gastric ulcers in elderly people after a catastrophic earthquake in Japan – proof that severely stressful events may indeed be a contributing factor.

A rare disorder called Zollinger-Ellison syndrome, in which tumours form in the pancreas and/or duodenum, is another potential cause of peptic ulcers. These tumours secrete an excess of acid, therefore one often finds multiple ulcers or ulcers in uncommon positions, such as in the second or third part of the duodenum. The tumours lead to increased stomach acid production which, in turn, can cause ulcers. Other causes of hypersecretion of acid are quite rare, but it might also occur in extensive resection of the small bowel.

The risk for peptic ulceration also increases with the use of the diuretic spironolactone (the reason is unknown) and the use of serotonin reuptake inhibitors (SRIs). Serotonin released from platelets plays an important role in the regulation of haemostasis. In a study published in 2008, which involved 28 hospitals, it was found that the use of any moderate or high-affinity serotonin inhibitor is associated with an increased risk of being admitted to hospital with gastrointestinal bleeding.

The use of oral steroids alone poses no risk, but the situation changes if NSAIDs are used concurrently. Crack cocaine causes local vasoconstriction in the gastrointestinal tract, which is responsible for the increase of peptic ulcer disease (PUD) in users.

Interestingly, in 5-20% of people with PUD, no clear cause can be identified.

We live in a world where facts and fiction get blurred
In times of uncertainty you need journalism you can trust. For 14 free days, you can have access to a world of in-depth analyses, investigative journalism, top opinions and a range of features. Journalism strengthens democracy. Invest in the future today. Thereafter you will be billed R75 per month. You can cancel anytime and if you cancel within 14 days you won't be billed.
Subscribe to News24
Next on Life
Risk factors for peptic ulcers