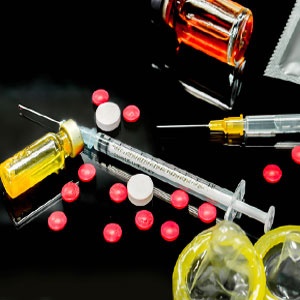 Being infected with HIV weakens your immune system and places you at risk of contracting other infections. If you’re infected with HIV, you’re at particular risk of acquiring tuberculosis (TB) and other sexually transmitted infections (STIs).

Being infected with HIV weakens your immune system and places you at risk of contracting other infections. If you’re infected with HIV, you’re at particular risk of acquiring tuberculosis (TB).

TB is caused by bacteria that usually attack the lungs. HIV predisposes you to develop TB; at the same time, TB accelerates the progression of HIV disease.

Ninety percent of people with normal immunity who are infected with TB will not progress to active disease – i.e. their immune system will clear the TB. However, 50-60% of HIV-positive people with TB will develop active disease. The annual risk of TB in someone who is HIV-positive is 10%, compared with a lifetime risk of 10% in healthy individuals.

In South Africa, approximately 57% of people with TB are co-infected with HIV. The World Health Organization (WHO) estimates that, in 2016, 40% of HIV deaths were due to TB. Without proper treatment, 45% of HIV-negative people who have TB, and almost all HIV-positive people with TB, will die.

Because HIV and TB frequently occur together in Africa, it’s vitally important to be well informed about TB, to recognise the symptoms and to get treatment early. Someone with TB can spread the disease while talking, coughing or sneezing. If someone who is susceptible then inhales the droplets, they may become infected and develop TB, too.

Symptoms of pulmonary (lung) TB include:

TB can be treated, but it’s critical to take every dose of medication for as long as it’s prescribed. Treatment usually lasts six months (in some cases, longer). Remember, if you’re living with HIV, it’s important to keep your immune system as healthy as possible.

Screening for TB
Because of the increased risk of acquiring TB in HIV, you should be screened for TB at every doctor’s visit if you’re HIV-positive. If TB is suspected, an Xpert test should be done.

This test can detect the presence of Mycobacterium tuberculosis, the main organism that causes TB, and can also determine whether the organism is susceptible to rifampicin – one of the medicines used in the treatment of TB. This is the first-line test used, because the results are available quickly (within 48 hours) and treatment can be started immediately.

If you’re HIV-positive and TB is suspected but the Xpert result is negative, you’ll be assessed clinically. Your doctor will do a chest X-ray and take a sputum culture.

If you have HIV, your tests are more likely to come back with atypical results. You’re also at increased risk for extrapulmonary disease (i.e. TB outside of the lungs) and more severe forms of TB such as rapidly-spreading disease (disseminated TB) and TB meningitis.

If the X-ray or other tests indicate TB, treatment should be started promptly.

It’s also important to realise that the presence of TB can reduce your CD4 count. This is because your body has to work hard to fight off the TB infection.

TB IRIS
Immune Reconstitution Inflammatory Syndrome (IRIS) is a phenomenon that can occur if you’re HIV-positive. It can manifest as two main syndromes:

1.) Paradoxical TB IRIS. This refers to a reaction that occurs after ART is initiated in people who are already receiving TB treatment and who are responding to it. It presents as the development of recurrent, new or worsening signs and symptoms of TB. This includes fever, return of cough, deteriorating radiological features, enlarged lymph nodes, meningitis, weight loss, general deterioration, acute inflammation, and TB lymphadenitis (the most common manifestation of extra-pulmonary TB).

2.) Unmasking TB IRIS. This is the development of features of TB in the weeks following initiation of ART, with an exaggerated or complicated clinical presentation and features that weren’t present before ART was initiated. This occurs because of diagnosis of active TB before ART initiation may have been missed. Remember: TB can be difficult to diagnose in HIV-positive people, especially if the person’s immune system is very weak.

Unmasking can also occur as the immune system improves with the help of ART. When this happens, the body has enough CD4 cells to fight the TB, causing an inflammatory reaction in the body.

Both situations usually occur in the first few weeks and up to three months after ART is started, restarted or adapted due to treatment failure. The symptoms are similar to that of paradoxical TB IRIS.

In people with TB meningitis, ART can be initiated four to six weeks after treatment for TB meningitis has started.

People with STIs are far more vulnerable to becoming infected with HIV – the infection may create sores or breaks in the skin that makes infection with HIV more likely.

In turn, HIV-positive people are more vulnerable to acquire other STIs. If you have HIV, your immune system is compromised, which means your body will find it harder to fight off the infection.

Also, if you’re HIV-positive and infected with another STI, you’re 3 - 5 times more likely than other HIV-positive people to transmit HIV through sexual contact.

The different STIs include:

If you think you may have an STI, it’s important to visit your doctor or clinic for treatment as soon as possible.

Until you know for sure whether you have an STI, it’s best to abstain from sex or use a condom. Remember to inform any current or recent sexual partner/s, so that they can also get tested and treated if necessary.

STIs are treated with antiobiotics or antiretrovirals. STIs caused by bacteria are easier to treat, while viral infections can’t always be cured (although they can be managed effectively). If you're pregnant and have an STI, get treatment immediately to reduce the risk of infecting your baby.
If you test positive for an STI, you should get tested for HIV, and vice versa.

We live in a world where facts and fiction get blurred
In times of uncertainty you need journalism you can trust. For 14 free days, you can have access to a world of in-depth analyses, investigative journalism, top opinions and a range of features. Journalism strengthens democracy. Invest in the future today. Thereafter you will be billed R75 per month. You can cancel anytime and if you cancel within 14 days you won't be billed.
Subscribe to News24
Next on Life
Myths about HIV/AIDS