Cryotherapy for pain and injuries now available in SA 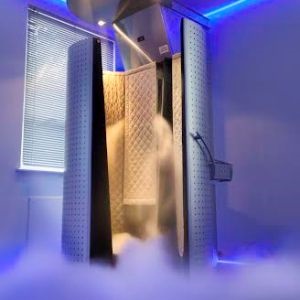 A CryoSauna for cryogenic treatments
CryoLiving

Pienaar knows the benefits of cryotherapy first-hand as he first came across it during his research into his own insomnia, when traditional therapies and treatments were failing.

He was initially treated with drugs, which left him with muscle spasms and weakness and mild depression.

He did some research and discovered cryotherapy, a promising treatment for his condition, but  not available in South Africa. The more he researched, the more he realised this therapy could benefit many people in South Africa, which led him to visit the originators at their factory in Poland – where he was awarded the distribution rights for Africa.

According to Pienaar’s website, CryoLiving, cryotherapy is “the use of low temperatures for healing and pain-relieving purposes”. He describes the feeling of whole body cryotherapy (WBC) as "almost like opening a deep freeze in mid-summer when that wave of cold air hits your skin".

WBC, which is one of the cryotherapy services offered at his treatment centre, is a procedure where an individual is exposed to ultra-low temperatures ranging between -120 °C and -160 °C in a cryogenic sauna for no longer than three minutes.

Localised cryotherapy is another treatment offered at the centre, and Pienaar says this is also becoming a popular treatment.

“This is a machine which sprays the liquid nitrogen vapour onto a small are such as a knee, elbow or shoulder. We have had impressive results. One woman had several vertebrae fused in her lumbar spine and struggled with lower back pain for years. Very sceptically, she came for one session, and the next day she told us she'd had the best night's sleep in a long time and that her back hasn’t felt this good in years.”

Pienaar said the centre offers treatments for everyone – from athletes to people with chronic health concerns to people just wanting to feel better.

- Improving functioning of the endocrine, nervous and immune system

Local cryotherapy targets specific areas and can be used in conjunction with WBC. It is commonly used in the following:

CryoFacials™ is a treatment applying liquid nitrogen vapour directly onto the face, neck and head to stimulate collagen production, reduce wrinkles, and brighten dark spots, among other benefits.

How many treatments will you need?

The number of treatments you might need is dependent on the severity of your health condition or injury.  However, Pienaar says that all the research shows that you will feel a change in your body even after the first session.

“Once you have done a course of treatments, the effects will last for 3 – 6 months. This means you only have to undergo treatments 2 – 3 times a year.”

Despite the popularity of cryotherapy overseas, it is still a very new treatment in South Africa and as such currently no medical aids cover it, a situation Pienaar intends to tackle as soon as possible.

There are a number of options available for cryotherapy, which range as follows:

Local cryotherapy is much more affordable as it uses less gas and costs:

“Our number one priority is to help as many people as we can. We will therefore go out of our way to get the treatment established. We need the participation of doctors and universities for further research and case studies to refine our treatment protocols or discover new applications for the treatment. As the demand grows, we plan to open treatment facilities around the country.”

How you can injury-proof your body

We live in a world where facts and fiction get blurred
In times of uncertainty you need journalism you can trust. For 14 free days, you can have access to a world of in-depth analyses, investigative journalism, top opinions and a range of features. Journalism strengthens democracy. Invest in the future today. Thereafter you will be billed R75 per month. You can cancel anytime and if you cancel within 14 days you won't be billed.
Subscribe to News24
Next on Life
Safety tips for young athletes