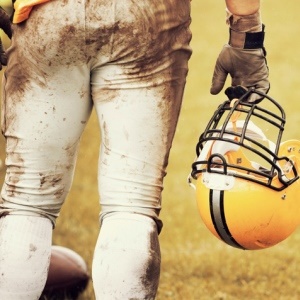 In a finding that suggests football used to be a less dangerous sport, a small study shows that men who played in high school in the 1950s and 1960s may not be at increased risk for dementia or memory problems.

Nor did they show increased rates of Parkinson's disease or amyotrophic lateral sclerosis (ALS), commonly known as Lou Gehrig's disease.

The study used a small group of men, the researchers acknowledged. But, they added, the results are in line with an earlier study that examined men who'd played high school football in the 1940s and 1950s.

"What we can say is, for that era, football did not increase the risks of neurodegenerative disease compared with other sports," said senior researcher Dr Rodolfo Savica, a neurologist at the Mayo Clinic in Rochester, Minnesota.

CTE is a progressive brain disease thought to result from repeated head trauma.

But Savica said that pro and college football is "completely different" from the high school level – in intensity, size and speed of the players, and the number of "hits" they take.

Research "clearly attests" to the risk of CTE in at least some former pro and college football players, Savica said.

"It's encouraging that they [the study authors] didn't see any increased risks, but the findings should be considered preliminary," said Podell, who was not involved in the research.

Because the study is small, he said, it may have lacked the statistical "power" to detect differences between former football players and other former athletes.

Savica stressed that no one should assume the findings apply to men who played high school football in more recent years.

"That was a different era," he said, referring to the time period his team studied.

High school players have gotten bigger and faster, Savica said, and there may be more "drive to win at all costs" these days compared with decades ago.

And while there have been advances in protective equipment, he added, that might give some players a "false sense of security" that causes them to be more aggressive, he said.

"You can still get a concussion when you're wearing a helmet," Savica said.

Podell agreed that the study findings can't be extrapolated to younger generations of high school players.

But he also pointed to some things that have changed for the better – particularly in the last decade or so.

Awareness of concussion and its shorter-term dangers has risen, and management of the condition has changed greatly since the era covered in the new study, Podell said.

US states, for example, now have "return to play" laws that typically require players to be immediately removed from the game if a concussion is suspected. And guidelines say that athletes should not return to play until they have a doctor's approval.

Back in the era that Savica's team studied, blows to the head were typically brushed off as "getting your bell rung".

"Maybe the coach would say, 'How many fingers am I holding up?' And if you said 'two,' you'd go back in the game," Savica said.

The findings, published online in Mayo Clinic Proceedings, are based on medical records of 296 men who'd played football at one of two Minnesota high schools, and 190 who'd been involved in swimming, basketball and wrestling. All athletes played from 1956 to 1970.

Over time, the researchers found, seven former football players had been diagnosed with dementia or mild cognitive impairment. That compared with five men who'd played other sports – with no difference in the two groups' overall rates.

Similarly, three men in each group had been diagnosed with Parkinson's disease, while no one had an ALS diagnosis.

Some big questions remain, Podell said. One is this: Are there certain people at greater risk of lasting damage from sports-related concussions or repeated knocks to the head?

"That's something researchers are trying to understand," he said. "Are there genetic and environmental risk factors that make some people more vulnerable?"

For now, Savica suggested that parents remember that sports – including football – can benefit kids. But they should also guard against the risks, he added.

That, he said, includes knowing the symptoms of concussion, and being sure that the trainers and coaches on the sidelines know how to respond to a possible concussion.

According to the US Centres for Disease Control and Prevention, some common concussion symptoms include headache, dizziness, nausea, vision problems, fatigue and confusion.

We live in a world where facts and fiction get blurred
In times of uncertainty you need journalism you can trust. For 14 free days, you can have access to a world of in-depth analyses, investigative journalism, top opinions and a range of features. Journalism strengthens democracy. Invest in the future today. Thereafter you will be billed R75 per month. You can cancel anytime and if you cancel within 14 days you won't be billed.
Subscribe to News24
Related Links
Aerobic exercise may help guard against dementia
High blood pressure may increase dementia risk
First aid for head injuries
Next on Life
Why physical therapy programmes are beneficial