Yes, you can reheat food more than once. Here’s why 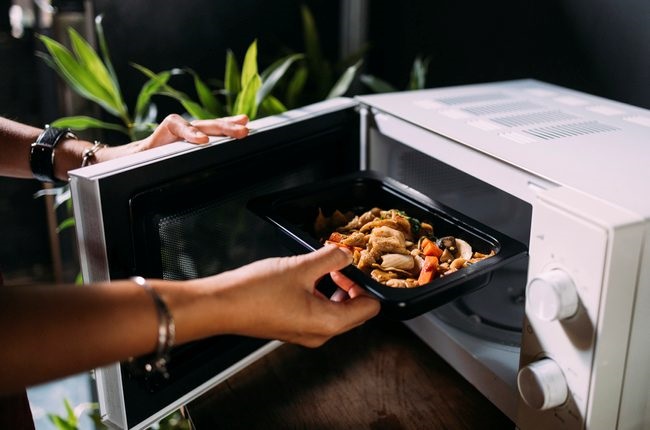 A side view of an unrecognizable woman standing in the kitchen and opening the microwave while holding a plastic container of food.
FreshSplash

Preparing meals in bulk and reheating is a great way to save time in the kitchen and can also help to reduce food waste. You might have heard the myth that you can only reheat food once before it becomes unsafe to eat.

The origins of food myths are often obscure but some become embedded in our culture and scientists feel compelled to study them, like the “five second rule” or “double-dipping”.

The good news is that by following some simple steps when preparing and storing foods, it is possible to safely reheat foods more than once.

Why can food make us sick?

There are many ways bacteria and viruses can end up in foods. They may occur naturally in environments where food is harvested or contaminate foods during processing or by food handlers.

Viruses won’t grow in foods and will be destroyed by cooking (or proper reheating). On the other hand, bacteria can grow in food. Not all bacteria make us sick. Some are even beneficial, such as probiotics in yoghurt or starter cultures used to make fermented foods.

However, some bacteria are not desirable in foods. These include bacteria which reproduce and cause physical changes making food unpalatable (or spoiled), and pathogens, which cause illness.

READ MORE | The debate over ‘best before’ dates: strict rule or just a suggestion?

Some pathogens grow in our gut and cause symptoms of gastroenteritis, while others produce toxins (poisons) which cause us to become sick. Some bacteria even produce special structures, called endospores, which survive for a long time – even years – until they encounter favourable conditions which allow them to grow and produce toxins.

While cooking and reheating will generally kill pathogenic bacteria in foods, they may not destroy toxins or endospores. When it comes to reheating foods, toxins pose the greatest risk of illness.

The risk increases in foods which have been poorly handled or cooled too slowly after initial cooking or reheating, since these conditions may allow toxin-producing bacteria to grow and proliferate.

Bacteria that cause foodborne illness typically grow at temperatures between 5°C and 60°C (the “temperature danger zone”), with fastest growth occurring at around 37°C.

Foods that are best able to support the growth of these bacteria are deemed “potentially hazardous” and include foods or dishes containing meat, dairy, seafood, cooked rice or pasta, eggs or other protein-rich ingredients.

A common culprit of food poisoning linked to reheated foods is Staphylococcus aureus which many people carry in their nose or throat. It produces a heat-stable toxin which causes vomiting and diarrhoea when ingested.

Food handlers can transfer these bacteria from their hands to foods after cooking or reheating. If the contaminated food is kept within the temperature danger zone for an extended period, Staphylococcus aureus will grow and produce toxins. Subsequent reheating will destroy the bacteria but not the toxins.

How to keep food safe to eat, even when reheating

To limit the growth of bacteria, potentially hazardous foods should be kept outside of the temperature danger zone as much as possible. This means keeping cold foods cold (less than 5°C) and hot foods hot (above 60°C). It also means after cooking, potentially hazardous foods should be cooled to less than 5°C as quickly as possible. This also applies to reheated foods you want to save for later.

When cooling foods, Food Standards Australia New Zealand recommends the temperature should fall from 60°C to 21°C in less than two hours and be reduced to 5°C or colder in the next four hours.

If food has been hygienically prepared, cooled quickly after cooking (or reheating) and stored cold, reheating more than once should not increase the risk of illness. However, prolonged storage and repeated reheating will affect the taste, texture, and sometimes the nutritional quality of foods.

When it comes to safely reheating (and re-reheating) foods, there are a few things to consider: