Why are we a violent nation? 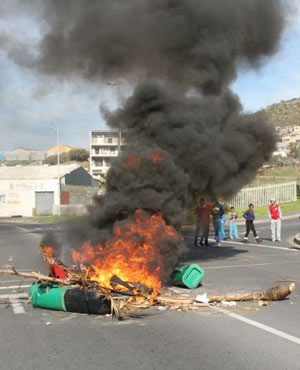 VIOLENCE seems to have become the language most South Africans use to express their anger. This often leads to the destruction of property and physical confrontations.

Recently, violence tarnished a soccer match between Orlando Pirates and Mamelodi Sundowns when Bucs fans ran riot after their club lost 6-0. Angry fans destroyed TV feed cameras and cables, before assaulting Sundowns players and fans. Pirates boss, Irvin Khoza, expressed his disappointment, saying, “Violence has no place in our football. No matter how strongly you feel, when you engage in violence, you discredit the legitimacy of your feelings and grievances. Violence is not an answer; instead, it diminishes any legitimate reasons in any protest.”

Political commentator, Sipho Seepe, says, “We are a traumatised nation. Trauma leads people to think that they don’t matter. Black people do not have any mechanism of dealing with the pressure inside. People are made to think that they are garbage; and they believe that violence is an answer.” He adds, “Black people’s lack of opportunities makes them to explode. We need to understand why poor people are so violent.”

During the #FeesMustFall campaign, students across the country went on the rampage, destroying property in some instances. A sense of entitlement is one of the factors that push people to believe that they can, or must, act violently. “There is also an act of provocation as protesters clash with the police and security guards if they do not get things their own way,” says Mike Mavimbela, who is the chairman of Social Media Securities. He adds that some leaders also incite violence by turning protests into a popularity contests and a political game, leading protesters to lose direction and resort to violence.

MP and DA shadow minister of Sports and Recreation, Tsepo Mhlongo, says, “We need to teach our people that anger and violence do not pay.” He warns, “We do not want a situation where infrastructure is vandalised or destroyed. We urge people to engage in peaceful protests.” He says the right to protest must be respected, but violence is not the answer and often ends up deviating the real purpose of what the issue was all about. “If fans are not happy with the way their teams play, they have many options to express this without resorting to violence. Fans can withdraw their support. They can also protest peacefully and hand over a list of their grievances to the team’s management.”

Related Links
Locals power up to protest wait
Residents stage service delivery protest in Hout Bay
North West protesters set cars on fire
Share
Next on Move!
Want to make friends? These people are looking for new friends near you