There have been 11 deaths in a fresh Ebola outbreak in DR Congo.
Patrick Meinhardt, AFP

The Democratic Republic of the Congo has recorded 17 Ebola cases in a new outbreak of the deadly virus in the western province of Equateur and 11 of those infected have died, health officials said on Monday.

Authorities reported 12 infections last week in the central African country, whose dilapidated health system is also combating a measles epidemic that has killed more than 6 000 people and Covid-19, which has infected about 4 800 and killed 112.

The National Institute of Biomedical Research said in its daily report there were now 14 confirmed Ebola  cases and three probable ones since a cluster of infections was confirmed in the city of Mbandaka on 1 June.

Ebola cases were confirmed in seven health zones across Equateur, including two in Bolomba, 300km northeast of Mbandaka, the World Health Organization said in an update.

WHO said more than 2 500 people have been vaccinated across the province. Vaccination helped control an Ebola outbreak 1 000km away in the east of the country that has killed more than 2 200 since 2018.

Genetic sequencing shows the new outbreak of Ebola, a virus that was discovered near northern DR Congo's Ebola River in 1976, is not linked to the one in the east.

We live in a world where facts and fiction get blurred
In times of uncertainty you need journalism you can trust. For only R75 per month, you have access to a world of in-depth analyses, investigative journalism, top opinions and a range of features. Journalism strengthens democracy. Invest in the future today.
Subscribe to News24
Related Links
Ebola vaccinations under way in new DRC outbreak
4 die in new Ebola outbreak in DR Congo
Battle-hardened after Ebola, Liberian doctors have head start on coronavirus outbreak
Next on News24
WATCH | Ethiopia: Tigray given 72 hours to surrender 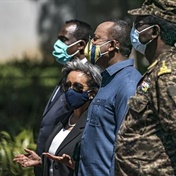 1 person wins the Daily Lotto jackpot
Full list of lottery results
Lockdown For
DAYS
HRS
MINS
Voting Booth
When planning for the Black Friday sales do you:
Please select an option Oops! Something went wrong, please try again later.
Save, research and plan ahead, preparing to make the most of it?
8% - 846 votes
Wait and see what looks like a good deal on the day?
14% - 1604 votes
Have no interest in spending more money this year?
78% - 8688 votes
Previous Results
Podcasts
PODCAST | POLITICS UNMUTED: When prophets and politics collide