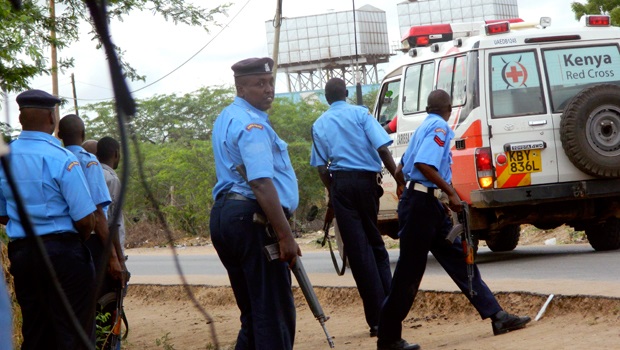 Kenyan police officers take positions outside the Garissa University College as an ambulance carrying the injured going to a hospital, during an attack by gunmen in Garissa, Kenya. (AP)
Live News Feed
Go to start

The United States condemned in the "strongest terms" an attack on Thursday by Islamist militants who massacred dozens of students at a university in Kenya.

"The US condemns in the strongest terms today's terrorist attack against the innocent men and women of Garissa University College in Kenya," a White House statement said. - AFP

So sad we hve lost 147 lives, this are animals #GarissaAttack pic.twitter.com/LE6yvaq6xd

UPDATE: 147 fatalities confirmed in the Garissa Attack. Plans are underway to evacuate students and other affected persons.

U{PDATE: The operation at Garissa University College has ended, with all four terrorists killed.

There seems to be conflicting reports over whether the siege in the university town of Garissa is over. Some media houses have reported that it has ended, while others say the al-Shabaab militants are still holding students hostage.

LATEST! "The gunmen in Garissa have been isolated by the security forces in the female dormitories. #GarissaAttack pic.twitter.com/sAXhYNpDGp"

According to Kenyan security officials, the rescue operation is now over. We are expecting the death toll to rise. It may be as high as 150 - AP

Students reported seeing notices warning of a possible attack on the campus. “As it was April 1, we just thought that it was fooling,” one student told the Washington Post.
Read full article.

At least four Al-Shabaab terrorists have been killed in the attack according to Interior Minister Joseph Nkaissery, who now says the siege is nearly over.

However, a spokesperson for the governor of Garissa told the Washington Post they feared that the gunmen were preparing for a second assault, as occurred during the horrific Westgate Mall attack.

“The militia are still on top of the roof. They are gathering there", he said, "to have an aerial view of the forces battling them.” - The Telegraph

My thoughts & prayers are with Kenya. Terrorism has shown it's ugly head again. Nothing justifies this violence & criminal behavior.

This is so sad.....the government needs to prioritize on security... #GarissaAttack

UN secretary general Ban Ki-moon on Thursday strongly condemned the "terrorist attack" by Somalia's Al-Shabaab Islamists on a university in Kenya that left dozens dead, and said those responsible should face justice.

"He hopes the situation will be quickly brought under control without further harm to those being held, and he calls for those responsible for today's attack to be swiftly brought to justice," his spokesperson said.

At least 70 Kenyan students were killed when the Shabaab Islamist group raided a university, the interior minister said, the country's deadliest attack since the US embassy bombings in 1998.

Ban offered condolences to the families of the victims and said the United Nations was ready to help Kenya "prevent and counter terrorism and violent extremism". - AFP

In the final hour before darkness fell, Kenyan troops stormed the student dormitory where the gunmen were holed up as explosions and heavy gunfire rang out.

"We are mopping up the area," Interior Minster Joseph Nkaiserry told reporters, saying that four gunmen had been killed after Kenyan troops launched an assault on the final building.

"Unfortunately, we lost... a number of lives... it is in the region of 70 students, and 79 have been injured, nine of them critically."It is the deadliest attack in Kenya since the 1998 bombing of the US embassy in Nairobi by Al-Qaeda, when 213 people were killed.

"The terrorists, 90 percent of the threat has been eliminated... we have been able to confirm that four terrorists have been killed," Nkaiserry added, saying that troops were scouring the campus as the total number of gunmen was not known, but that the main operation was over.

The Al-Qaeda-linked Shabaab claimed the pre-dawn attack, the same insurgents who carried out the Westgate shopping mall massacre in Nairobi in September 2013, when four gunmen slaughtered at least 67 people in a four-day bloodbath.

Shabaab spokesperson Sheikh Ali Mohamud Rage told AFP the gunmen had taken non-Muslims hostage, and that their mission had been "to kill those who are against the Shabaab.

"It was not clear if any of the students the Shabaab said they had held were alive at the time of the final assault by troops. However, officials said over 500 students had been accounted for.

"Kenya is at war with Somalia," Rage said, referring to the thousands of Kenyan troops in Somalia as part of an African Union military mission. - AFP

We appeal to anyone with any info on #Gamadhere to share with relevant authorities and security agencies. pic.twitter.com/YQ3MCvER4D

At least 70 Kenyan students were massacred on Thursday when Somalia's Shebab Islamist group attacked a university, the interior minister said, deadliest attack since US embassy bombings in 1998.

"We are mopping up the area," Interior Minster Joseph Nkaiserry told reporters, saying that four gunmen had been killed after Kenyan troops launched an assault on the final building where the insurgents had holed out for over 12 hours. - AFP

Reuters: Kenya says about 500 out of 815 students accounted for - interior minister.

BREAKING: Kenya says about 500 out of the 815 students accounted for: interior minister #GarissaAttack

9 critically injured from the #GarissaAttack have been airlifted from Garissa Airbase to Nairobi for treatment.

Inspector General @JBoinnet issue a curfew order from 6:30pm to 6:30am in Tana River, Garisa, Wajir and Mandera counties until 16 April

Witnesses told the news organisation that dozens of bodies could be seen on campus.

Witnesses have told Al Jazeera that all hostages held by Al-Shabaab have been killed.

CNN: Who are Al-Shabaab? http://t.co/HaJ84ZGZTo

Garissa - Kenyan troops killed two gunmen from a gang of fighters from Somalia's Shabaab Islamists who stormed a university on Thursday and seized hostages, the interior ministry said.

"Two terrorists have been neutralised in the ongoing operation, security agencies intensify rescue operation," the interior ministry said in a statement.

Heavy gunfire and shouts from inside the building where hostages were believed to be held were heard by journalists with the Kenyan troops. - AFP

Police also say that they suspect he has fled into the lower parts of the country and urged vigilance from all Kenyans.

"I urge Kenyans to remain calm but at the same time vigilant in the face of these attacks," Inspector General of Police, Joseph Boinett, said.

Garissa Governor Mohammed Nadhif in an interview with News24 Kenya said that he had no knowledge of who Kuno was.

"I have never heard about him and do not know him. It saddens me that he has come to kill locals, a place where he supposedly lived," he said.

According to police, Kuno uses his family members in carrying out terrorist activities in northern Kenya. He is also named as the Al-Shabaab’s leader for Juba region in Somalia, and is  currently in charge of external operations against Kenya. - News24 Kenya

Garissa - A man believed by Kenyan police to be the mastermind behind the terrorist attack on the Garissa University College is a Kenyan citizen and was a former school teacher and principal.

A KES 20 million bounty (R650 000) has been placed on the head of the fugitive police say is called Mohamed Kuno, who has been on the run from law enforcement agencies since December.

Kuno is a former teacher and Principal at Madarasa Najah school in Garissa. According to police reports, he operates under three aliases: Sheikh Mahamad, Dulyadin and Gamadheere.

The police report states that he joined the militants in Somalia at the time of the Islamic Courts Union, which later morphed into the current Al-Shabaab. – News24 Kenya

Am leaving the scene now #GarissaAttack expect news that gunmen have been killed and few words on hostages!

Christians hunted down as al-Shabaab take their war from Somalia to Kenya http://t.co/9dSDTekvEI via @TIMEWorld

Heavy gunfire for the last 10 minutes. Never heard anything like this #Kenya #GarissaAttack - @DennisOkari pic.twitter.com/fqU7JaGFFx

10,000 police officers to be recruited immediately because of #GarissaAttack jubilee govt hypocrisy once again.

Kenya is losing her children #Pray4GarrisaStudents

#Kenya's government has named the alleged mastermind of the #GarissaAttack. With a bounty of around $215,000. pic.twitter.com/wrJvaAN9vO

Go to top
We live in a world where facts and fiction get blurred
In times of uncertainty you need journalism you can trust. For 14 free days, you can have access to a world of in-depth analyses, investigative journalism, top opinions and a range of features. Journalism strengthens democracy. Invest in the future today. Thereafter you will be billed R75 per month. You can cancel anytime and if you cancel within 14 days you won't be billed.
Subscribe to News24
Next on News24
WATCH | All the latest news videos from around Africa

3 bag the Daily Lotto jackpot!
Full list of lottery results
Voting Booth
Are you going to keep wearing a mask following the announcement that it is no longer required under law?
Please select an option Oops! Something went wrong, please try again later.
No ways, I'm done
42% - 2416 votes
Yes, I still want to be cautious
21% - 1204 votes
Only certain circumstances
37% - 2150 votes
Previous Results
Podcasts
PODCAST | The Story: Water-shedding and a desperate bid to avert Day Zero in Eastern Cape drought