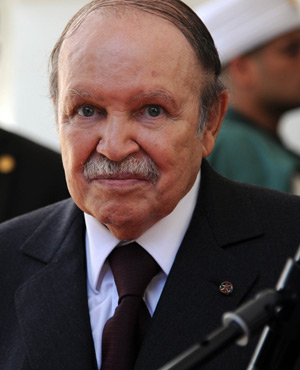 Algiers - Algeria's government has released a new draft constitution that would limit presidents to two terms and recognise the language used by Berber minorities as official.

The draft, published in state media on Tuesday, is part of reforms promised by President Abdelaziz Bouteflika and his government after Arab Spring uprisings in neighboring countries in 2011.

The constitution, which needs parliamentary approval, would limit presidents to two five-year terms. Long-ailing Bouteflika was re-elected for a fourth term in 2014.

The charter would also require a parliamentary majority to name a prime minister, currently appointed by the president.

The draft includes Amazigh as an official language in a move hailed by activists who had pushed for recognition for years.

It stipulates that Arabic would remain the official government language.

We live in a world where facts and fiction get blurred
In times of uncertainty you need journalism you can trust. For only R75 per month, you have access to a world of in-depth analyses, investigative journalism, top opinions and a range of features. Journalism strengthens democracy. Invest in the future today.
Subscribe to News24
Related Links
Algeria president leaves France after medical tests
Algeria president in France for medical tests
Algeria ex-presidential head gets 3 years
Next on News24
Children killed in attack on Cameroonian school

3 players win R109k in the Daily Lotto prize
Full list of lottery results
Lockdown For
DAYS
HRS
MINS
Voting Booth
Who do you think is going to win the 2020 US election?
Please select an option Oops! Something went wrong, please try again later.
Biden is going to take it
47% - 7519 votes
It's four more years for Trump
53% - 8644 votes
Previous Results
Podcasts
PODCAST | POLITICS UNMUTED: Money for nothing, but how do we correct the corruption ship?