At least 11 companies, including textile and plastic factories, were torched in recent days in the town of Sebeta as well as about 60 vehicles, according to Fana, a state-controlled broadcaster, which blamed "anti-peace forces" for the attacks.

The Bishangari Lodge on the shores of Lake Langano south of the capital Addis Ababa, one of the main tourist destinations in Oromia, was among the premises set alight.

"The lodge is completely destroyed. 100% burnt down," said a hotel employee who did not want to be named.

A Dutch fruit farm, Africa-Juice, was also ransacked this week in the south-eastern Awash Valley.

Oromo protesters blame foreign investors for occupying land appropriated from them by the government and said they have had enough.

"The people have been protesting peacefully for almost a year. They didn't find any solutions from the government until now, but rather the killing has continued as we have seen at Ireecha festival," said Barnabas, a protester in the town of Holeta who gave only his first name.

"This makes the people furious."

The latest violence follows the deaths of more than 50 people in a stampede triggered by police firing tear gas at the Ireecha religious festival in Bishoftu, a town in Oromia, last Saturday.

On Tuesday, a US citizen was killed close to Addis Ababa when a rock thrown by protesters hit the vehicle she was travelling in.

She was identified as plant biology researcher Sharon Gray, in a statement from California's UC Davis University.

The UN on Friday called for an independent investigation into the violence, as government faces its most serious unrest since coming to power in 1991.

Such a probe was needed "to ensure accountability for this and several other incidents since last November involving protests that have ended violently," Rupert Colville, a spokesman for the United Nations human rights agency, told reporters in Geneva.

Protests began in Oromia in November and have since expanded to Amhara with human rights groups claiming several hundred killed so far in a crackdown on demonstrations.

Together, Oromos and Amharas make up 60% of the population of Ethiopia.

The protesters accuse the country's leaders, who largely hail from the northern Tigray region, of monopolising power.

"The businesses are targeted because these are the companies that took the land from the farmers without giving enough compensation," said Barnabas, who also complained that few locals get jobs at the foreign-owned companies.

"We are not getting benefits from them," he said.

The mobile internet network was cut in the capital on Friday for a third day running, a measure often taken by authorities seeking to prevent people from organising demonstrations.

The unrest has pushed some investors to question their continuing presence in Ethiopia, threatening to undo the economic growth on which the government stakes its reputation.

Dutch-owned flower company Esmeralda Farms announced it was shutting up shop after its facility in the northern Amhara region was attacked last month.

"Ethiopia has received a lot of attention from investors over the last couple of years, on the premise of its relative stability and security. They are now becoming increasingly conscious of the need to enhance their approach to security risk mitigation," said Tom Berry, an analyst at S-RM Intelligence and Risk Consulting, which has raised its investor "risk rating" as a result of the violent protests.

We live in a world where facts and fiction get blurred
In times of uncertainty you need journalism you can trust. For only R75 per month, you have access to a world of in-depth analyses, investigative journalism, top opinions and a range of features. Journalism strengthens democracy. Invest in the future today.
Subscribe to News24
Related Links
Ethiopia says 11 factories damaged by 'anti-peace forces'
Renewed protests indicate need for probe in Ethiopian stampede - AI
Protesters in Ethiopia kill UC Davis student
Next on News24
Angola police fire tear gas to quash anti-government protests 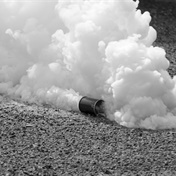 3 players win R109k in the Daily Lotto prize
Full list of lottery results
Lockdown For
DAYS
HRS
MINS
Voting Booth
Who do you think is going to win the 2020 US election?
Please select an option Oops! Something went wrong, please try again later.
Biden is going to take it
47% - 7703 votes
It's four more years for Trump
53% - 8857 votes
Previous Results
Podcasts
PODCAST | POLITICS UNMUTED: Money for nothing, but how do we correct the corruption ship?