How social media regulations are silencing dissent in Africa

In October, anti-police brutality activists in Nigeria used online platforms to raise awareness of and call for the dissolution of the Special Anti-Robbery Squad (SARS), an infamous police unit accused of extortion, extrajudicial killings, rape and torture.

Their multi-faceted social media campaign, #EndSARS, resulted in widespread protests that captured the global imagination and elicited a violent response from the Nigerian government.

As protests raged across the country, the security forces forcefully detained dozens of protesters and used water cannons and teargas to disperse the crowds. The government’s crack down on the protest movement reached its peak on 20 October, when security forces opened fire on a peaceful protest camp in the country’s commercial capital, Lagos, killing 12 unarmed protesters.

Despite the government’s brutal response, and the regrettable acts of violence by a limited number of demonstrators as well as other unrelated groups taking advantage of the unrest, the #EndSARS campaign demonstrated the extensive role social media can play in advancing modern governance and human rights in Africa.

Through social media platforms, the #EndSARS activists not only managed to call thousands of Nigerians to action and hold Nigerian authorities to account, but also garnered unprecedented international attention and support for their cause.

The fact that a burgeoning human rights movement has been contemplated, created and sustained online did not go unnoticed in the overwhelmingly conservative halls of power in Nigeria. Shaken to the core by this new media phenomenon and its astounding proclivity to galvanise a traditionally silenced and disregarded youthful majority, some Nigerian state governors and public officials started to demand that social media be regulated.

On 2 November, for example, the Northern Governors’ Forum issued a communique calling for the strict supervision and censorship of social media to thwart “subversive actions” and “avoid the spread of fake news”.

Far from being the exception to the norm, such troubling attempts to govern social media usage and effectively impede progressive public discourse and the universal right to assemble peacefully have become increasingly ubiquitous and fairly normalised throughout Africa.

On 16 August, for example, a communique published by the Southern African Development Community (SADC), read much like the statement from the Nigerian governors. It “urged Member States to take pro-active measures to mitigate external interference, the impact of fake news and the abuse of social media, especially in electoral processes”.

That a whole regional bloc attributed the emergence of social media-driven dissent to “external” designs is most disturbing. The regional bloc’s ambition to control the content posted on social media platforms is undoubtedly sinister, especially in a region fraught with hotly disputed elections and violent spurts of authoritarian crackdowns on mundane civic activism and political opposition.

Needless to say, the aim of the SADC’s statement is not to protect Africans from foreign disinformation campaigns and fake news, but to ensure self-serving narratives and political agendas promoted by local governments remain unchallenged.

While the regulations promulgated in these countries appear essential and even reasonably progressive on the surface, they contain problematic clauses aligned to dubious “national security” imperatives. And in practice, they all serve to instil doubt and fear in social media users and encourage them to practice self-censorship to avoid facing the wrath of the state machinery for voicing their grievances about their governments and local institutions.

The “good old days” of archetypal state media organisations, or media empires with strong ties to dominant political forces, singlehandedly churning out jingoistic propaganda to diversity-starved and disinterested listeners, viewers and readers are truly over.

Still, in the main, Africa’s rulers remain unwilling to move on and embrace the changing times. Social media platforms have allowed the masses to scrutinise the actions of their leaders and demand accountability in real-time, but many African leaders are failing to understand that they no longer have the ability to diminish or obliterate the truth by establishing and moderating national conversation topics through “friendly” media organisations.

During the #EndSARS protests, for example, Nigeria’s president, Muhammadu Buhari, complained that his government’s critics were spreading “deliberate falsehoods and misinformation” through social media, claiming “that this government is oblivious of the pains and plights of its citizens”.

With these words, he attempted to delegitimise not only the protests, but also Nigerians’ right to form an independent opinion on the policies and actions of their elected government. More importantly, he made it clear that he believes Nigerian people should only consume information and opinions compiled, approved and disseminated by the Nigerian state, or media houses that support his administration’s policies. 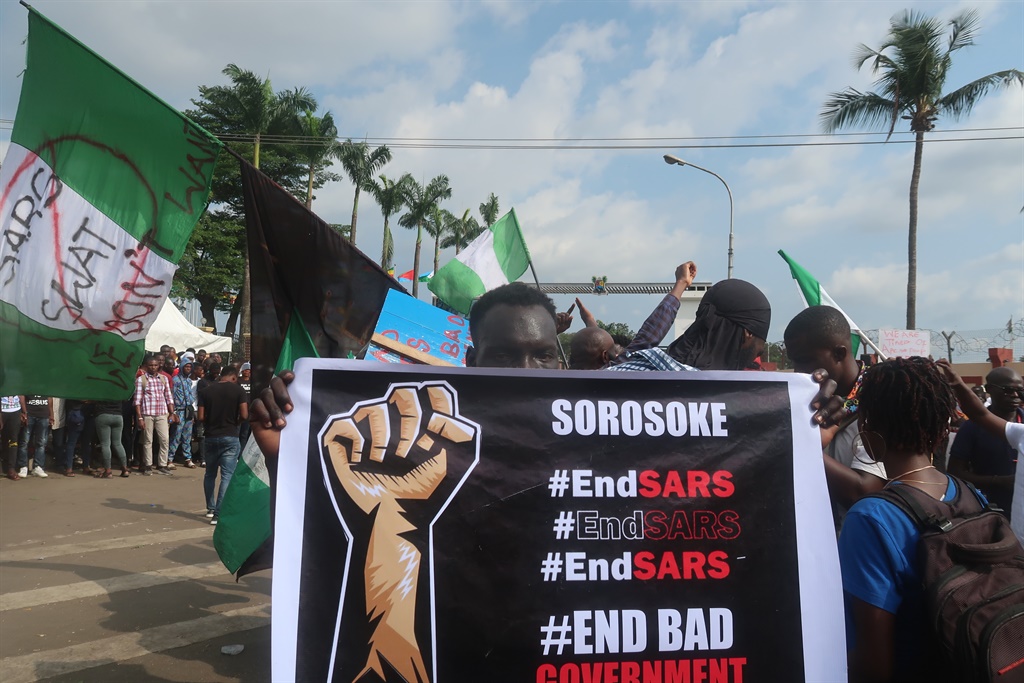 Protesters jubilate as military men dispatched to disperse them in Alausa, Ikeja, Lagos, Nigeria exchange knuckles and take selfie with the protesters on October 20, 2020. Lagos State Government, on Tuesday announced curfew in the state to curtail the ongoing #EndSARS protest. Protesters are calling for the scrapping of police unit, known as Special Anti-Robbery Squad (SARS) over the squads incessant harassment, brutality and killing of innocent Nigerians. Photo by Adekunle Ajayi.
Getty Images Photo by Adekunle Ajayi/NurPhoto via Getty Images

It did not dawn on the Nigerian president that the #EndSARS protests themselves were in fact a solid repudiation of the “truths” and state-sanctioned opinions his administration has long been pushing on the Nigerian people.

This demonstrates Buhari’s inability to understand how democratic expression and interactions work in the social media era. Granted, state authorities should sanction social media users that spread hate speech, propagate disinformation and encourage violence. But they cannot simply cast the growing dissent and anger on social media platforms as “falsehoods” and “misinformation”.

Social media commentary and analyses exist well beyond the protective realm of state-controlled media, where the limits of legitimate criticism are defined by the state and bad governance is repeatedly whitewashed.

The Buhari administration is not the only leadership in Africa unable to understand and accept the realities of the social media era.

In Zimbabwe, for instance, amid a stifling economic crisis, intense political wrangling, and lack of media freedom, people turned to social media to voice their criticism of the government, and share important information on corruption, oppression and governmental abuse.

President Emmerson Mnangagwa and other high level officials from the ruling Zanu-PF, however, refused to accept as authentic the anger expressed by members of the public on social media over the government’s failure to curb high-level corruption and human rights abuses.

They instead chose to accuse “bad apples” and “foreign detractors” of misrepresenting Zimbabwe’s increasingly calamitous situation to the world on social media. Disappointingly, even South Africa’s ruling African National Congress party weighed in on the matter in September, in Zanu-PF’s defence, and declared a need to guard against “fake news and agenda-setting on social media”.

All this, while the #ZimbabweanLivesMatter hashtag was trending on social media, in response to the Mnangagwa administration’s brutal crack-down on anti-government protests in the country.

This blistering and unapologetic contempt for freedom of thought and expression has certainly engulfed the continent. In Morocco, a YouTuber who criticised the Moroccan king was handed a prison sentence and a journalist-activist who defended anti-government protesters in a tweet was detained. Egyptian journalist Basma Mostafa was detained in October for “using her personal social media account to publish and promote false news”.

The states pushing for greater social media regulation in Africa have, for the most part, long suppressed traditional media liberties and clamped down on journalistic endeavours.

From Lesotho to Kenya and Egypt, new social media regulations that have been passed or currently being considered mark a retrogression to the repression of freedoms and limitations to the dissemination of information that shaped the pre-social media era.

Small wonder that where service delivery is bad, poverty is rampant and youth unemployment and underemployment are high, dubious legal manoeuvrings and statements against so-called social media abuse and external political interference are equally rife.

In the absence of strong leadership and guidance from the African Union to help safeguard hard-won media freedoms and safeguard human rights, sadly social media regulations in Africa are not fighting hate speech and disinformation.

They are silencing dissenting voices and shutting down one of the only democratic spaces in which Africans can demand change and accountability from their leaders.

The views expressed in this article are the author’s own and do not necessarily reflect Al Jazeera’s editorial stance.

We live in a world where facts and fiction get blurred
In times of uncertainty you need journalism you can trust. For only R75 per month, you have access to a world of in-depth analyses, investigative journalism, top opinions and a range of features. Journalism strengthens democracy. Invest in the future today.
Subscribe to News24
Related Links
WATCH | Millions at risk as coronavirus disrupts immunisation campaigns - UN
Nigeria reports 'sudden spike' in yellow fever deaths
Nigeria protesters retreat but vow to fight on
Next on News24
Eswatini Prime Minister Ambrose Dlamini transferred to SA for Covid-19 treatment