French President Emmanuel Macron on Friday threw his weight behind South Africa's battle at the World Trade Organisation for a waiver that could see African countries manufacture Covid-19 vaccines.

South Africa and India have led the effort to lobby the WTO to waive the regulations on Trade-Related Aspects of Intellectual Property (TRIPS). The regulations currently prevent generic manufacturers from producing the Covid-19 vaccine.

"I fully cheer the battle led by President Ramaphosa and Prime Minister Modi of India agrees as well; we shall produce as soon as possible and there should be no intellectual property hurdle," said Macron.

Macron was speaking at the Union Buildings during his first state visit to the South Africa. South Africa's efforts during the Covid-19 pandemic echoed its lobbying for generic antiretroviral treatment during the HIV/Aids crisis.

That waiver, however, cannot be applied to the Covid-19 pandemic and may take up to three years to secure. In the meantime, France has issued a mandate to the WTO and Word Health Organisation on the issue, he added.

Ramaphosa described Macon's support as "music to [his] ears".

"Vaccine apartheid is working in such a way that only a few are getting the vaccines on a limited basis and the countries that need vaccines the most are not getting it," said Ramaphosa.

"This will be a game changer for Africa when we are able to manufacture vaccines and do not have to wait. We are waiting now. We do not want to have to wait forever while people are dying."

Only two percent of Africans had so far received a Covid-19 vaccine jab, according to the WHO.

Macron announced plans for a partnership with local vaccine manufacturer Aspen, and greater participation with the public-private manufacturer BioVac. Upscaling Africa's capability to produce vaccines was essential to curbing the Covid-19 pandemic globally.

READ | Lockdown: A new booze ban is on the cards as third wave looms

"There's a very simple figure that will illustrate all of that: Africa is about 20% of the needs and one percent of the production," said Macron. 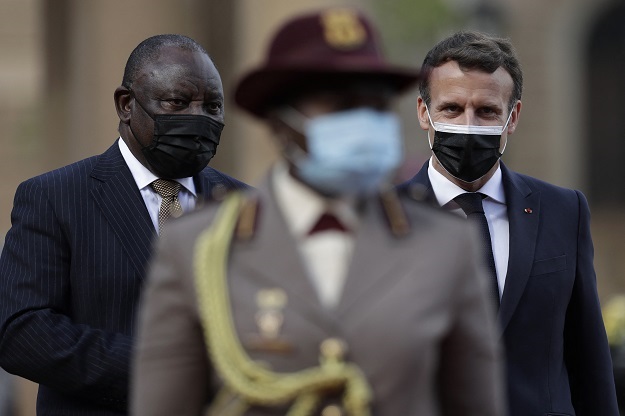 Ramaphosa and Macron during a welcoming ceremony at the Union Buildings.
AFP Themba Hadebe / POOL / AFP

"We need more transparency," Macon said. "We're giving a lot of money to many structures, but we do not know how much money is being paid to buy these vaccines, and we suspect the poorest are paying the highest price."

Macron also pledged to lobby the International Monetary Fund to increase the reserve fund of Special Drawing Rights for economic recovery during the pandemic from $33 billion to $100 billion.

Ramaphosa urged Macron to go further, and back his bid for 25 percent of the $650 billion rescue fund.