Madagascar hands out 'miracle' virus cure as it lifts lockdown 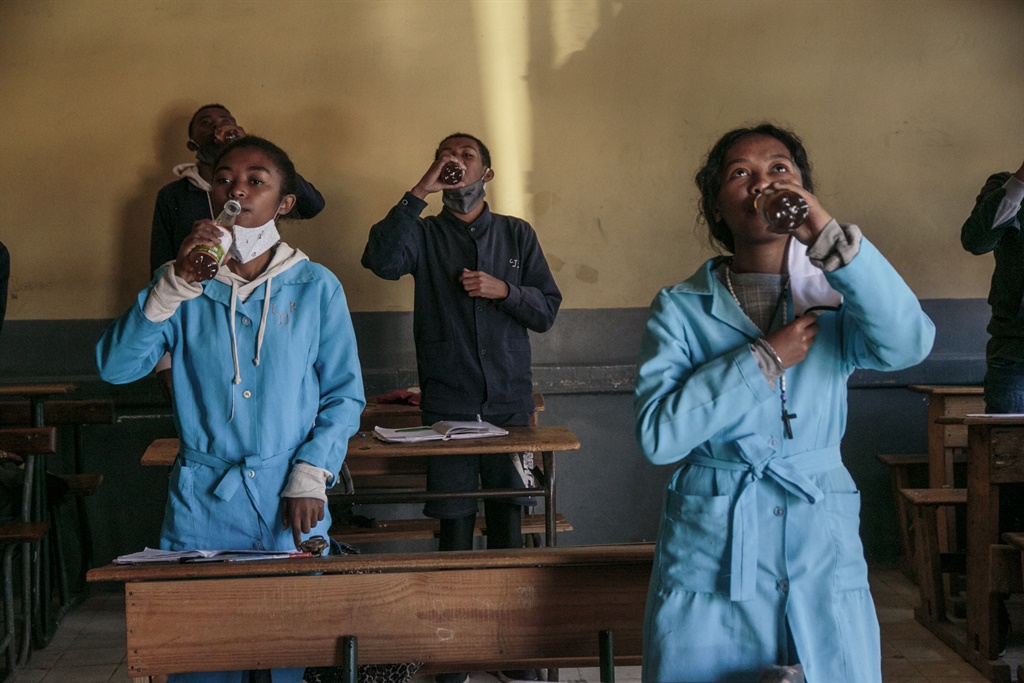 Unarmed Madagascar soldiers went door-to-door in the capital Antananarivo, doling out sachets of a local herbal tea touted by President Andry Rajoelina as a powerful remedy against the novel coronavirus.

Baptised Covid-Organics, the tonic is derived from artemisia - a plant with proven efficacy in treating malaria - as well as other indigenous herbs.

It has been developed by the Madagascar Institute of Applied Research (IMRA) but has not been tested internationally.

"This herbal tea gives results in seven days," Rajoelina announced at its official launch on Tuesday.

"We can change the history of the entire world," he said, after downing a dose. "Two people have now been cured by this treatment."

Mainstream scientists have warned of the potential risk from untested herbal brews.

There is currently no known cure for coronavirus, which has infected at least 121 people in Madagascar and more than 2.6 million worldwide.

Yet military officials on the Indian Ocean island nation say the infusion would be better than nothing.

In pairs, soldiers followed people through Antananarivo's narrow alleyways into their homes.

"Good morning, we are here to distribute the Covid-Organics tea," one of them said.

"We are eager to try this infusion since we saw president Rajoelina drink it on television," the 58-year-old said.

Most of Madagascar's 26 million inhabitants live in grinding poverty with limited access to healthcare and regularly take herbal teas for a variety of common ailments.

"I think it's great," said Dominique Rabefarihy, clutching a sachet of Covid-Organics in the poor Ankazomanga neighbourhood.

"It reassures me that soldiers are watching out for my family's health and security," the housewife said.

Madagascar deployed the army last month to help enforce a lockdown in its three main cities to curb the spread of Covid-19.

Soldiers who set up road blocks and patrolled streets are now making sure everyone receives a sachet of the infusion and instructions for use.

"One infusion goes into four litres of water," said Rabefarihy, repeating the instructions. "Two cups per day for adults, one cup for children, nothing for pregnant women."

Madagascar's coronavirus cases remain relatively low and there have been no recorded deaths so far.

But the country's fragile healthcare system would easily be swamped by a surge in cases and authorities are banking on prevention.

Their aim is to raise awareness about the virus and strengthen people's immune systems.

Covid-Organics is set to be distributed across the island, with a particular focus on the worst-affected cities of Antananarivo, Fianarantsoa and Toamasina.

Fixed collection points have also been set up in the capital.

Madagascar claims two people have recovered from coronavirus, after drinking their local herbal remedy for the disease. It is free to use in the country. pic.twitter.com/aFsQY8CyCM

Ignoring social distancing cues, a crowd gathered around a kiosk, lining up for the so-called "miracle drink", being decanted into recycled water and soda plastic bottles.

"As long as the WHO (World Health Organisation) cannot provide any medicine to cure this disease, I trust President Andry Rajoelina's proposed remedy," said Jean Paul Rakotozafy, 72, as he queued up.

The WHO has cautioned against untested home therapies.

"While some western, traditional or home remedies may provide comfort and alleviate symptoms of Covid-19, there is no evidence that current medicine can prevent or cure the disease," it said in an emailed statement to AFP.

It added that there are "several ongoing clinical trials" of both western and traditional medicines.

The homespun "remedy" was launched as confinement measures were progressively lifted. The president said the lockdown was eased because a "solution against coronavirus" had been found.

Public transport resumed in Antananarivo on Monday and schools re-opened on Wednesday.

Some children were given a cup of Covid-Organics in class.

"Of course each parent is free not to allow their child to take it," said the cabinet chief Ranoramoro.

"For now, no one has objected."

We live in a world where facts and fiction get blurred
In times of uncertainty you need journalism you can trust. For 14 free days, you can have access to a world of in-depth analyses, investigative journalism, top opinions and a range of features. Journalism strengthens democracy. Invest in the future today. Thereafter you will be billed R75 per month. You can cancel anytime and if you cancel within 14 days you won't be billed.
Subscribe to News24
Related Links
Madagascar president launches coronavirus 'remedy'
Madagascar 'anti-virus brews' sell like hot cakes in local markets
'Everyone stay at home' - Madagascar orders lockdown of two main cities in virus fight
Next on News24
WATCH | All the latest news videos from around Africa