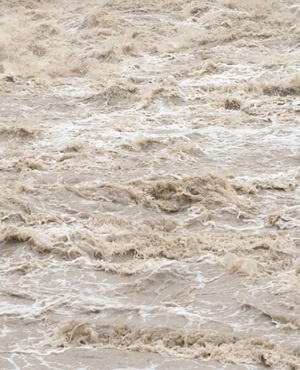 Niamey - Flooding unleashed by three months of torrential rain in Niger has killed at least 54 people and left nearly 200 000 displaced, the UN said on Friday.

The UN Office for the Coordination of Humanitarian Affairs (OCHA) said most of the deaths took place in the capital Niamey and that more than 11 000 homes were destroyed.

Niamey has been hardest hit along with Dosso in the south, Tillaberi in the west and the central-southern areas of Maradi and Zinder as Niger struggles once more with flooding which claimed more than 50 lives last year.

The recovery from the disastrous rains promises to be long.

Food production will also take a hit, with the flooding killing some 16 000 cattle and about 12 000 hectares of crops being ruined, the UN said.

With its 17 million population in a country three quarters of which comprises desert, Niger regularly is beset by food shortages caused by drought as well as severe flooding.

A humanitarian source told AFP on Thursday that exacerbating the problems were rising River Niger water levels, leading to fears of a repeat of serious flooding in 2012 which left dozens dead and some 500 000 homeless.

Last week, Niger said it had launched a campaign to destroy mosquito breeding sites to help combat the spread of deadly malaria in Niamey after the rain transformed some areas into swamps.

We live in a world where facts and fiction get blurred
In times of uncertainty you need journalism you can trust. For only R75 per month, you have access to a world of in-depth analyses, investigative journalism, top opinions and a range of features. Journalism strengthens democracy. Invest in the future today.
Subscribe to News24
Related Links
Thousands urged to evacuate Niger capital after rains
38 dead, 92 000 left homeless by Niger floods
11 killed and 30 000 left homeless in Niger floods
Next on News24
DR Congo to launch Covid vaccination drive

1 person bags the Daily Lotto jackpot
Full list of lottery results
Lockdown For
DAYS
HRS
MINS
Voting Booth
Would you choose to continue working from home after the coronavirus lockdown if given the option?
Please select an option Oops! Something went wrong, please try again later.
Yes, it's much better for me
40% - 7473 votes
No ways! I can't wait to get back to the office
12% - 2176 votes
A mixture of both would suit me best
48% - 9016 votes
Previous Results
Podcasts
PODCAST | MISSING MATTHEW EPISODE 3: Decades of false starts add to a family's despair