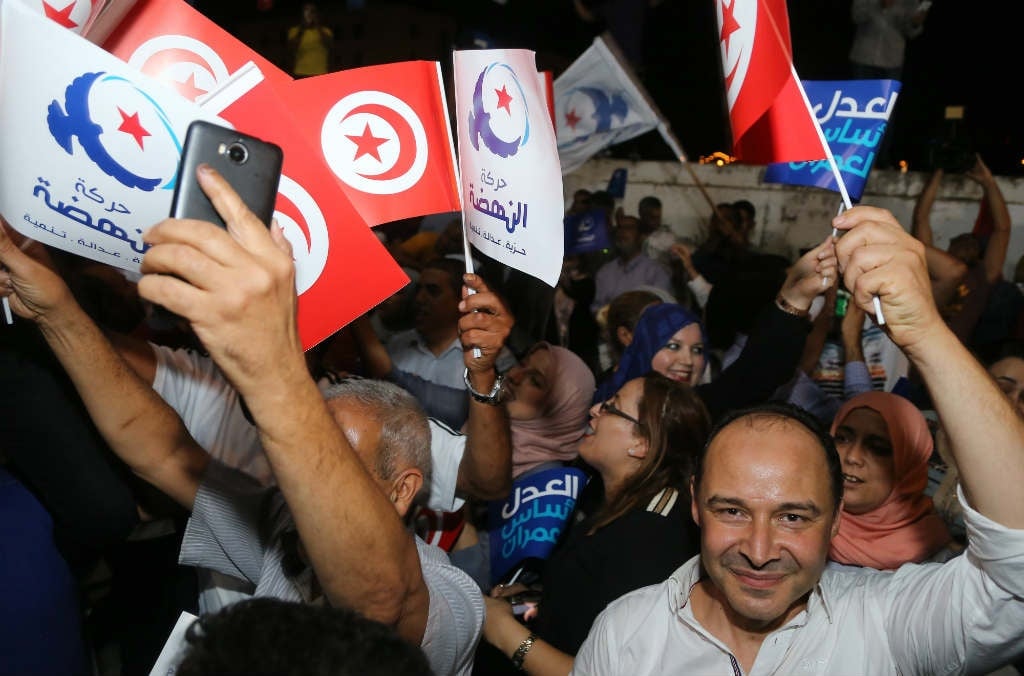 Supporters of the Tunisian Islamist-inspired Ennahdha party celebrate in reaction to the first exit polls of the legislative elections. (October 6, 2019) (Anis Mili/AFP)

The ink-stained fingers once proudly displayed after the 2011 revolution were briskly wiped clean as Tunisians, fed up with the status quo, cast ballots for MPs for the third time since the uprising. The vote comes after traditional political parties were eclipsed in favour of independent candidates during the first round of presidential polls last month in a trend that looked likely to continue.

Sixty-year-old voter Mohamed Daadaa said he had "no hope for a positive change" in Tunisia. "I don't trust anyone or any political party. Life just gets worse in this country," he said.

More than 15 000 candidates on 1 500 lists are contesting 217 seats in a parliament dominated by the Islamist-inspired Ennahdha, in alliance with centrist party Nidaa Tounes, which has been decimated by infighting.

Polling stations for the seven-million electorate were to remain open until 18:00, with preliminary official results scheduled for Wednesday, although exit polls were expected to be released from late on Sunday.

Surveys circulated informally, due to a ban on their publication, predict Ennahdha will lose ground to the new Qalb Tounes (Heart of Tunisia) party of jailed business tycoon Nabil Karoui, who has won a place in a two-way presidential run-off on October 13.

The sidelining of the ruling political class in the first round on September 15 was rooted in frustration over a stagnant economy, high unemployment, failing public services and rising prices.

But monitors worried that voters on Sunday had found little inspiration at the ballot box.

"People no longer trust the old parties and they don't know the new ones, so they're not motivated in this election," said Ali Rekiki, who works with Tunisian electoral monitor Mourakiboun.

Karoui, a media mogul held since August on money-laundering charges, came second behind Kais Saied, an independent law professor, in the first round of presidential voting.

Courts have rejected several appeals for his release during campaigning.

Interim president Mohammed Ennaceur – filling in since the death of Beji Caid Essebsi in July brought forward the vote for head of state – warned on Friday that Karoui's detention could have "serious and dangerous repercussions on the electoral process".

The presidential race may have overshadowed the legislative contest, but parliament is responsible for tackling the main challenges facing Tunisian society.

A strong showing for Qalb Tounes could bolster Karoui's campaign and supporters say it might make a case for him to take over as prime minister if he loses to Saied.

The socially conservative professor has not come out in support of any party.

With the electorate tired of political manoeuvring and the failure to improve living conditions since the ouster of late long-time autocrat Zine El Abidine Ben Ali, new movements have been vying for votes.

Aich Tounsi, which calls itself an "anti-party", has emerged from the civil society movement, while Islamist populist lawyer Seifeddine Makhlouf's Karama aims to take seats from Ennahdha, which has been weakened by past alliances with political elites.

With the plethora of parties and movements in contention, the stage is set for complex and rowdy negotiations before any side emerges with the minimum 109 seats needed to head Tunisia's next government.

In the run-up to the vote, Qalb Tounes and Ennahdha have officially ruled out forming an alliance.

Parliament will have two months to agree on the formation of a new government in a country hailed as the Arab Spring's sole democratic success story but straining to meet the revolution's other demands of "work and dignity".

We live in a world where facts and fiction get blurred
In times of uncertainty you need journalism you can trust. For only R75 per month, you have access to a world of in-depth analyses, investigative journalism, top opinions and a range of features. Journalism strengthens democracy. Invest in the future today.
Subscribe to News24
Related Links
Tunisia sets presidential election runoff for October 13
Tunisia Islamist party throws weight behind vote frontrunner
Tunisia: Saied, Karoui advance to run-off after topping polls
Next on News24
Cameroon police arrest 'suspected homosexuals' at AIDS centre