Protesters stand on a vehicle that is part of a military convoy sent to enforce the curfew at the Lagos State Secretariat, Alausa, in Nigeria on October 20, 2020.
Benson Ibeabuchi / AFP

Sporadic gunshots were heard in Lagos on Friday as security forces patrolled Nigeria's biggest city after days of unrest following the shooting of protesters that sparked condemnation at home and abroad.

President Muhammadu Buhari warned demonstrators in a televised address on Thursday not to "undermine national security" as he called for an end to widespread protests gripping Africa's most populous country.

The 77-year-old leader was speaking for the first time since the shooting in Lagos on Tuesday, although he did not directly address the incident.

He appealed to the youth to "resist the temptation of being used by some subversive elements to cause chaos".

"For you to do otherwise will amount to undermining national security and the law and order situation. Under no circumstances will this be tolerated," Buhari said.

Nigeria, where many live in extreme poverty and where the median age is 18, is a tinderbox of economic and social grievances.

Protests against police abuse erupted on 8 October after a video of an officer allegedly killing a civilian went viral.

Despite the disbanding of the police unit accused of brutality, the federal Special Anti-Robbery Squad (SARS), protests spread and violence escalated.

Anger spread further after pictures and videos on social media showed security forces shooting on a peaceful crowd of around 1 000 protesters on Tuesday.

Amnesty International said 12 people were killed in the incident, with a total of 56 people dead in the unrest across the country.

US Secretary of State Mike Pompeo called for an immediate investigation into violence by security forces, which has also triggered condemnation by the United Nations, the African Union, the European Union and others.

"We thank you and urge you all to seek to know all the facts available before taking a position or rushing to judgement and making hasty pronouncements," Buhari said.

The spreading of "deliberate falsehood and misinformation, in particular through social media" was, he said, "a ploy to mislead the unwary within and outside Nigeria into unfair judgement and disruptive behaviour."

After the president's speech, a key protest group told its followers to "stay home" but many made it clear that the movement would continue.

"The past two weeks have been tough for many Nigerians, most specifically the last two days," the Feminist Coalition said in a statement.

"We hereby encourage all young Nigerians to stay safe, stay home, and observe the mandated curfew in your state."

Others in the youth-led movement insist that the demonstrations will continue.

"This was just practice. We go again! Now we must deploy our unity and experiences in every sector to design the country that we want," said Adetola 'Tola' Onayemi, a lawyer involved in the protest movement.

Meanwhile, the governor of Lagos, who imposed a round-the-clock curfew on the deadly shooting, published on Friday a list of 21 cases of policemen being prosecuted "for offences related to the violation of human rights in Lagos".

"We are working to stabilise things across the state as we look to rebuild," the governor said on Thursday.

We live in a world where facts and fiction get blurred
In times of uncertainty you need journalism you can trust. For only R75 per month, you have access to a world of in-depth analyses, investigative journalism, top opinions and a range of features. Journalism strengthens democracy. Invest in the future today.
Subscribe to News24
Related Links
Can Nigeria’s #EndSARS protests lead to police abolition?
US condemns 'excessive' use of force by military in Nigeria
Nigeria's president urges end to street protests as gunfire heard in Lagos after protest crackdown
Next on News24
Ethiopian news agency says 10 000 people 'destroyed' in war 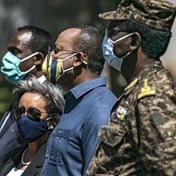 R500k for one Daily Lotto player!
Full list of lottery results
Lockdown For
DAYS
HRS
MINS
Voting Booth
When planning for the Black Friday sales do you:
Please select an option Oops! Something went wrong, please try again later.
Save, research and plan ahead, preparing to make the most of it?
8% - 937 votes
Wait and see what looks like a good deal on the day?
14% - 1755 votes
Have no interest in spending more money this year?
78% - 9688 votes
Previous Results
Podcasts
PODCAST | POLITICS UNMUTED: When prophets and politics collide