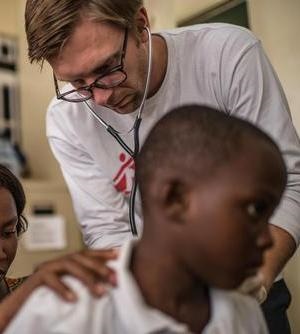 He said they were using the VSV-EBOV vaccine, which has already been tested in Guinea, one of the three countries worst affected by the outbreak, along with Liberia and Sierra Leone and was also used in September in a town in northern Sierra Leone under quarantine.

This vaccine is the first to have proven effective, according to experts.

The operation will last "until all the contacts are vaccinated", Kargbo added.

Since Tuesday, 22 people have been vaccinated in Magburaka and five in Kambia while figures were not yet available for the town of Lunsar, where the dead student usually lived.

According to medical sources, the young woman fell ill at the start of January while on holiday in Baomoi Luma, near the border with Guinea.

The World Health Organization announcement on Friday confirming she had tested positive for Ebola came just a day after west Africa celebrated the end of the outbreak with Liberia becoming the last of the three worst-hit countries in the region to be declared free of the disease.

Among the hundreds of identified contacts, "nobody has shown any sign or symptom of the virus yet," Kargbo said.

In Lunsar, however, some were opposed to receiving the vaccine and had refused to allow health teams into their homes, according to residents.

"Some of those quarantined barricaded their homes saying the vaccine was harmful and could lead to other ailments," one of them said.

The Ebola outbreak, which began in Guinea in December 2013, killed more than 11 000 people and was the deadliest outbreak of the virus yet.

We live in a world where facts and fiction get blurred
In times of uncertainty you need journalism you can trust. For only R75 per month, you have access to a world of in-depth analyses, investigative journalism, top opinions and a range of features. Journalism strengthens democracy. Invest in the future today.
Subscribe to News24
Related Links
Joy over Ebola victory crushed in Sierra Leone
Suspected Ebola death in Sierra Leone hours after WHO gives all-clear
WHO declares end to Ebola transmission in West Africa
Next on News24
Nigeria national electricity grid experiences 'multiple trippings', collapses