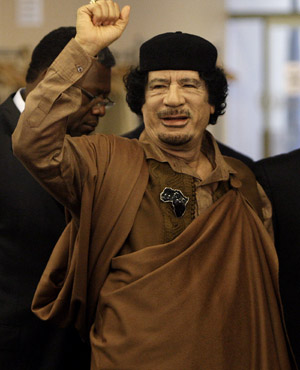 Beirut - A son of Libya's late leader Muammar Gaddafi was briefly kidnapped in Lebanon by militants demanding information about the fate of a Shi'ite cleric who went missing in Libya decades ago, a security official and local TV stations said on Friday.

Hannibal Gaddafi appeared in a video aired late on Friday on local Al-Jadeed TV saying anyone with information about Imam Moussa al-Sadr should come forward. Gaddafi appeared to have been beaten up and had black eyes but said in the video he is "in good health, happy and relaxed."

Later on Friday, a senior security official said police collected Gaddafi from the northeastern city of Baalbek where he was being held by the Shiite militants, whose affiliation was not immediately known. The official, who spoke on condition of anonymity in line with regulations, said Gaddafi was being brought to Beirut.

Al-Sadr's 1978 disappearance has been a long-standing sore point in Lebanon. The imam's family believes he may still be alive in a Libyan prison, though most Lebanese presume al-Sadr is dead. Today he would be 87 years old.

Al-Sadr was the founder of a Shiite political and military group that took part in the long Lebanese civil war that began in 1975, largely pitting Muslims against Christians.

"I am with people who have a cause and they are loyal to their cause," Gaddafi, who is married to a Lebanese woman, said in the video. "We should respect their loyalty to their cause and at least give them the truth."

Al-Sadr was one of the pioneers of the Shi'ite movement that has become a force across the Middle East, spurred by the 1979 Islamic revolution in Shi'ite Iran.

Born in the Iranian holy city of Qom, al-Sadr came to Lebanon in 1959 to work for the rights of Shiites in the southern port of Tyre. In 1974, a year before Lebanon's 15-year civil war broke out, al-Sadr founded the Movement of the Deprived, attracting thousands of followers.

The following year, he established the military wing Amal — Arabic for "hope" and an acronym for the militia's Arabic name, the Lebanese Resistance Brigades — which later fought in Lebanon's civil war.

Since al-Sadr's disappearance, Libya has maintained that the cleric and his two traveling companions left Tripoli in 1978 on a flight to Rome and suggested he was a victim of a power struggle among Shiites.

Most of al-Sadr's followers are convinced Muammar Gaddafi ordered al-Sadr killed in a dispute over Libyan payments to Lebanese militias.

The Libyan leader was killed by opposition fighters in 2011, ending his four-decade rule of the north African country. Even after his death, al-Sadr's fate is still unknown.

Hannibal Gaddafi was arrested in 2008 for allegedly beating up two servants in a Geneva luxury hotel, sparking a diplomatic spat that dragged on for months. In 2005, a French court convicted him of striking a pregnant companion in a Paris hotel. He was given a four-month suspended prison sentence and a small fine.

He fled to Algeria after Tripoli fell, along with his mother and several other relatives.

We live in a world where facts and fiction get blurred
In times of uncertainty you need journalism you can trust. For only R75 per month, you have access to a world of in-depth analyses, investigative journalism, top opinions and a range of features. Journalism strengthens democracy. Invest in the future today.
Subscribe to News24
Next on News24
Cameroon blames separatists for massacre of children

Sweet Sunday for 2 Daily Lotto players
Full list of lottery results
Lockdown For
DAYS
HRS
MINS
Voting Booth
Who do you think is going to win the 2020 US election?
Please select an option Oops! Something went wrong, please try again later.
Biden is going to take it
47% - 7786 votes
It's four more years for Trump
53% - 8939 votes
Previous Results
Podcasts
PODCAST | POLITICS UNMUTED: Money for nothing, but how do we correct the corruption ship?