'They cut his head off': Grief torments Mozambique terror survivors 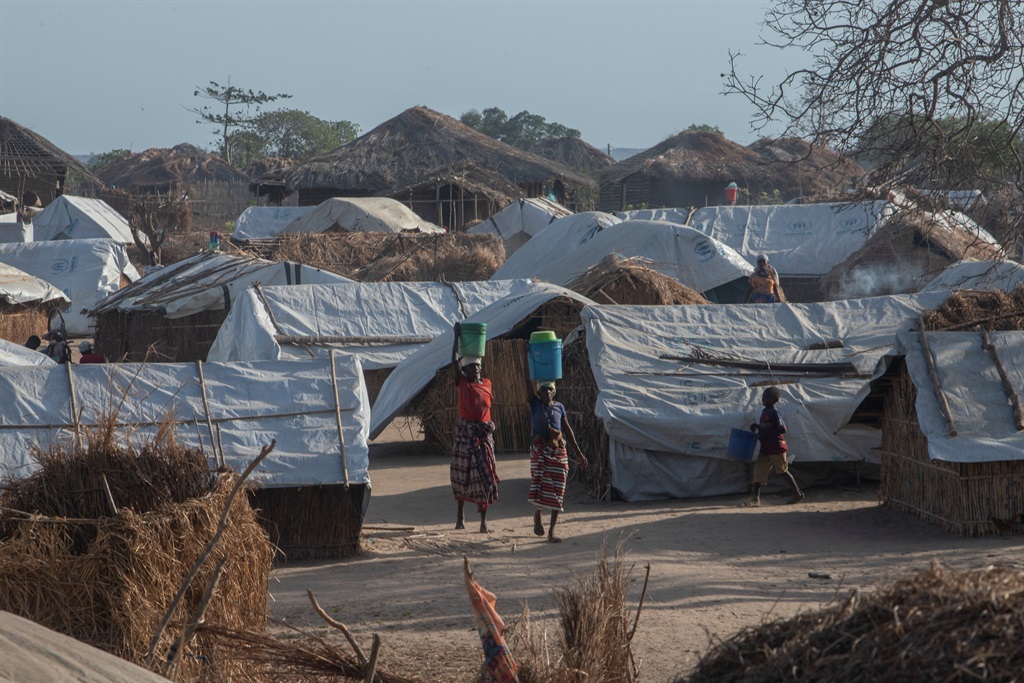 Women carry buckets on their heads as they walk through the huts at the 25 de Junio camp for the displaced people in Metuge on December 9, 2020 where over 16.000 displaced from the northern Cabo Delgado area are now sheltered.
Alfredo Zuniga / AFP

It's been nearly a year since her husband, son and brother-in-law were beheaded by Islamist militants waging a brutal insurgency in northern Mozambique.

"I managed to escape," she told AFP, struggling to speak about her loss.

"Now I am here in Metuge," she said, standing in front of her tent at a camp for displaced people on the outskirts of Pemba, the capital of the northern Cabo Delgado province.

Shortly after her family members were killed in February, Ali fled her home in Quissanga district and walked 60 kilometres over two days.

She sought refuge at the 25-Junho camp, named after the southeast African nation's independence day 25 June, which shelters 16 000 of the half a million people displaced by the extremist violence.

In the face of such tragedy, the widow now seems distant, removed from reality.

Her immediate concern is finding enough food for herself, her three children and three grandchildren, all of whom share the tiny tent donated by the World Food Programme.

"I have not received any support since I arrived," she said, although her two sons receive food rations donated by humanitarian agencies.

A jihadist group has caused havoc in gas-rich Cabo Delgado over the last three years, with beheadings and the torching of villages becoming hallmarks of its campaign to establish an Islamist caliphate.

Little is known about the jihadists known locally as Al-Shabab, which has no known link to the group of the same name operating in Somalia, but it has pledged allegiance to the Islamic State.

The group has staged more than 700 organised attacks since launching the insurgency in 2017, according to the US-based Armed Conflict Location & Event Data (ACLED) group.

More than 2 400 people have been killed, about half of them civilians, ACLED said.

Last month the militants dismembered five men and 15 teenage boys who had been participating in a male initiation ceremony.

In April, they shot dead and beheaded more than 50 youths for allegedly refusing to join their ranks.

The insurgents killed her son and kidnapped her granddaughters, but not before badly beating her during a raid in September.

She had been looking for food in the fields with a few other villagers when the militants arrived.

They were rounded up and forced to march back to their village, where their homes had already been set on fire.

They beat the women, then took one of the men into the bush five metres away, and cut off his head at the neck. They also took another man and killed him.

"They only beat us women, but they took the girls, my granddaughters, with them."

With tears streaming down her face, she said in a choking voice that the men then "continued to hit me hard".

"After hours of long torture, they left us and took two girls, my granddaughters".

She relives the pain every day.

"Even today, when I think about what happened, I can't eat or sleep," she said, sitting in front of her tent, wearing a floral blue capulana-style headwrap.

"I cry when I think of my sons and granddaughters who were taken by the attackers. But up to now they haven't come back. I don't know if they're alive."

"I think and pray every day asking God for my granddaughters to come back, but nothing happens."

We live in a world where facts and fiction get blurred
In times of uncertainty you need journalism you can trust. For only R75 per month, you have access to a world of in-depth analyses, investigative journalism, top opinions and a range of features. Journalism strengthens democracy. Invest in the future today.
Subscribe to News24
Next on News24
Extremists thriving across Mozambique's northern border, UN officials warn

Here are the winning Lotto and Lotto Plus numbers
Full list of lottery results
Lockdown For
DAYS
HRS
MINS
Voting Booth
Will you continue to use WhatsApp following the company announcing a change terms of service which would force users to share personal data?
Please select an option Oops! Something went wrong, please try again later.
Yes, the terms of service do not bother me enough to switch
53% - 8797 votes
No, I will be switching over to a new service
43% - 7203 votes
I've never used WhatsApp
4% - 672 votes
Previous Results
Podcasts
PODCAST | MISSING MATTHEW EPISODE 3: Decades of false starts add to a family's despair