Comparing the situation in Myanmar's Rakhine province to the massacres in Bosnia in 1995 and Rwanda in 1994, the leader of Africa's most populous nation declared: "The international community cannot remain silent."

More than 420 000 people have fled violence in Rakhine, which Buhari said bears the hallmarks of a "state-backed program of brutal depopulation" targeting Rohingya on the basis of their ethnicity and Muslim religion. New York – Zimbabwean President Robert Mugabe’s son was spotted in New York on Tuesday in a shopping extravagance at a time when most Zimbabweans back home could hardly put food on their tables.

Mugabe took a 70-member delegation to the 72nd session of the United Nations General Assembly with each of his delegate gobbling $1 500 per day during their 10-day stay in the United States while the majority of Zimbabweans were surviving on less than one US dollar per day.

Bellarmine Chatunga, known for his lavish spending and partying lifestyle, was captured by the Voice of America at a MacDonald’s restaurant in central New York City near the United Nations Headquarters where his father was attending a meeting with the world’s leaders.  The picture was published on the radio station’s Facebook and Twitter pages. New York – Zimbabwean President Robert Mugabe on Tuesday exposed his frailty in New York City where he was shown by international news channels sleeping most of the time when President Donald Trump was giving his first address to world leaders at the United Nations General Assembly.

Mugabe travelled to New York with a 70-member delegation, including his family, inviting a backlash from his critics in Zimbabwe, who accused him of misusing taxpayers’ money at a time when Zimbabwe’s economy was floundering and showing little signs of recovery. Every member of the 93 year-old leader’s entourage was reportedly being paid $1 500 per day in stipends while the majority of the southern African country’s citizens were reportedly surviving on less than one dollar per day.

Cape Town – Cameroon President Paul Biya's government is using an anti-terror legislation to arrest and threaten local journalists who report on Boko Haram militants and unrest in the country's English-speaking regions, the Committee to Protect Journalists (CPJ) has said.

With elections due to take place in 2018, many journalists were now "too scared" to cover politics or sensitive issues, CPJ said in a special report released on Wednesday.

Cameroon enacted the anti-terror law in December 2014 as part of its effort to counter Boko Haram, which has carried out kidnappings as well as attacks. Deputy chief justice Philomena Mwilu described "disturbing, if not startling, revelations" about the conduct of the Independent Elections and Boundaries Commission (IEBC) and singled it out for ignoring a Supreme Court order to open up its computer servers after opposition allegations of hacking.

"Our order of scrutiny was a golden opportunity for the IEBC to place before the court evidence to debunk the petitioner's claim," Mwilu read from the court's detailed judgement on Wednesday. 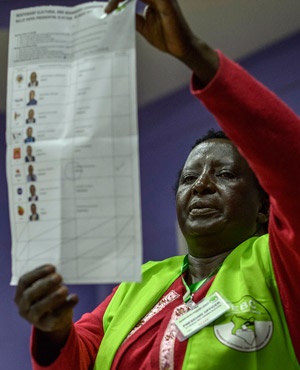 Harare - Zimbabwean activist pastor Evan Mawarire pleaded not guilty on Tuesday to charges of misconduct and inciting a crowd to cause violence.

Mawarire - an outspoken opponent of ruling President Robert Mugabe - became popular with his #ThisFlag movement that challenged Mugabe's government over the economic crisis.

Responding in court after the charges were read out in Zimbabwe's capital Harare, he said: "I plead not guilty."

We live in a world where facts and fiction get blurred
In times of uncertainty you need journalism you can trust. For only R75 per month, you have access to a world of in-depth analyses, investigative journalism, top opinions and a range of features. Journalism strengthens democracy. Invest in the future today.
Subscribe to News24
Related Links
PIC: Mugabe's son known for lavish spending spotted shopping in New York
Picture of Mugabe 'sleeping' as Trump addresses UN General Assembly goes viral
Kenya court blames election commission for botched vote
Next on News24
France's Macron backs Chad's 'stability and integrity'

Every day ke payday for Daily Lotto players
Full list of lottery results
Lockdown For
DAYS
HRS
MINS
Voting Booth
As a child or as an adult, have you ever been a victim of bullying?
Please select an option Oops! Something went wrong, please try again later.
Yes, at school
55% - 4602 votes
Yes, at work
18% - 1500 votes
No, I've never experienced this
27% - 2311 votes
Previous Results
Podcasts
PODCAST | MISSING MATTHEW EPISODE 3: Decades of false starts add to a family's despair