Ahead of the municipal elections on 1 November, the Centre for Analytics and Behavioural Change (CABC) has been tracking conversations on Twitter to get an idea of main themes and emerging trends. According to their analysis, the ANC and the EFF are the only two parties to receive mentions within the top 50 words used in the IEC/elections narrative.

In anticipation of the municipal elections to be held on 1 November, the Centre for Analytics and Behavioural Change (CABC) has since July this year been tracking conversations on social media platform Twitter around the IEC and the elections.

This is in order to identify and understand emerging themes and concerns raised by the public, voters and other electoral stakeholders - including political parties. This tracking has been ongoing, notwithstanding the IEC’s appointment of an enquiry into the possibility of conducting free and fair elections, and its subsequent application to the Constitutional Court for postponement.

With six weeks to go before the elections this is a good time to delve into the emerging themes and trends animating discussion on Twitter and other social media.

With political parties in full campaign mode and several manifesto launches slated for the week and weekend ahead, the IEC remains preoccupied with ensuring the management and administration of credible, free and fair elections. But it is worth wondering about the extent to which they themselves have cast a pall of doubt over the credibility, freeness and fairness of the elections.

After all, it is the IEC who argued to the Constitutional Court, on the basis of former deputy Chief Justice Dikgang Moseneke's enquiry, that "it is impossible to hold free, fair and safe elections by the deadline of 1 November".

Despite arguing that the election will be credible, free and fair if they are to be held, Twitter users, sometimes driven by the narrative constructed by political parties and their leaders, appear doubtful of the (re)assurances.

The CABC uses tools that collect large volumes of data on particular topics.

The data is sourced from Twitter and is publicly available, in real time. A portion of the analysis includes a random sample of comments, verified by a group of people (the "crowd") to assess authenticity and sentiment.

The analysis and interpretations are not exhaustive, or generalisable to the population. Though some of it is speculative, it nevertheless indicates and illustrates sentiment and is of interest to a variety of electoral stakeholders and the broader public.

Volume of the conversation

Between July and September this year, conversations within the IEC/elections narrative received almost 200 000 mentions, with more than 42 000 unique authors contributing to the conversation.

Fig. 1 below shows the volume of the conversation over time, as well as unique author count.

During July and the first half of August, the volume of conversation about the IEC and the elections was relatively small.

In the last month, however, volume has trended sharply upwards.

Three volume peaks in the graph below are determined by and correlate with spectacular political events, high profile court cases, or controversial comments made by politicians or political parties. 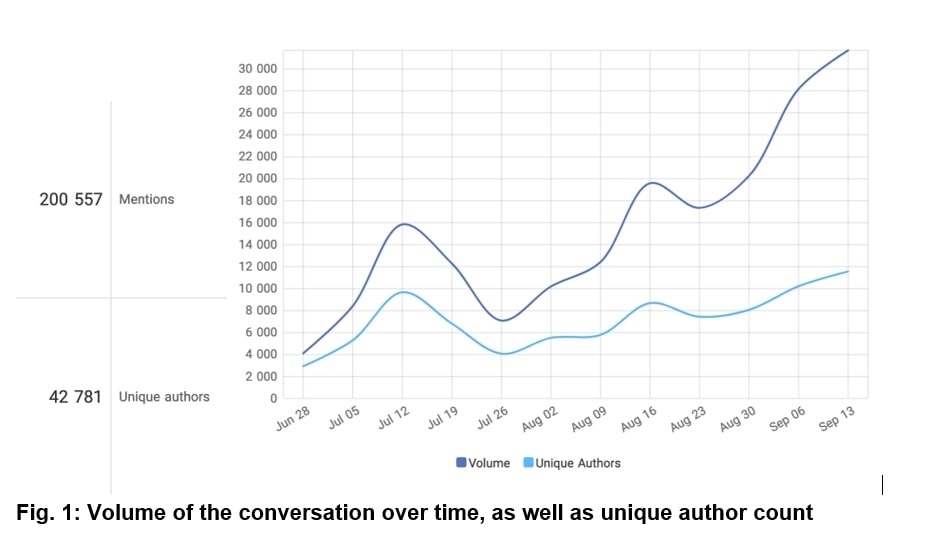 The first peak was seen on 12 July, at the height of the insurrectionary unrest which disrupted economic activity in KwaZulu-Natal, and supply chains along the KwaZulu-Natal – Gauteng corridor and claimed more than 300 lives.

Conversation also peaked on 14 July, when the IEC launched online voter registration and on 16 August following the election of Hakainde Hichilema as President of Zambia. Though this seemed unrelated, a number of Twitter users used the moment to point to alternations in power, emphasising how Zambians removed perceived corrupt officials seemingly entrenched in power.

This "teachable" moment was also used to suggest that if Zambia was able to hold elections then there was no reason South Africa could not. Ostensibly this was a counter-narrative to Justice Moseneke’s findings that free and fair elections would not be possible and a clap-back to the IEC’s constitutional court application for a postponement and to the parties that supported it.

Another peak was seen on 19 August when Nosiviwe Mapisa-Nqakula was elected the speaker of the National Assembly after President Ramaphosa’s cabinet reshuffle; and an increase in mentions occurred after an short and temporary decline for a about four days, 23 August when the ANC failed to register candidates to contest elections in roughly 93 municipalities, about 35 in which they stood to lose continued control.

A larger peak occurred on 3 September when the Constitutional Court dismissed the IEC’s application for postponement and then again on 6 September, when the IEC announced the reopening of candidate registrations.

The biggest spikes in the conversation were seen on 18 September when the voter registration weekend commenced and on 20 September after the Constitutional Court dismissed the DA's application to set aside reopening of candidate registration, despite the heat generated by the Democratic Alliance and Helen Zille, who previously accused the IEC of using the Court's dismissal of its application to postpone the elections to grant the ANC a reprieve in registering candidates by re-opening both voter registration, as well as candidate registration processes.

Incidentally, the Court found this to be in order, showing that narratives crafted by politicians on Twitter can gather momentum but be inconsistent with the real legal and political situation as it exists in reality.

Between July and September, a total of 25 882 mentions were verified by the crowd.

With an exclusion of the mentions which did not fall into any of the below (Fig.2) categories, people’s mistrust in government appears to be the main area of concern within the IEC/elections narrative. Fig. 3 below shows the relationship between government and IEC mistrust, within the crowd-verified mentions. Sharing the 26 July peak with the mistrust in government category, mistrust in the IEC also peaked on:

Mistrust in the IEC is a matter of grave concern especially when the credibility of the election management and administration is challenged by political parties – who do so without merit and for their own incremental narrow political purposes.

Political parties often do this in order to externalise the cost of their inability to mediate and manage their own internal conflicts.

Otherwise, they pre-emptively excuse their poor(er) electoral performance relative to their and their supporters expectations, by blaming the IEC of bias.

This is of special concern, since the continued assault on the reputation and credibility of the IEC by political parties drives public sentiment, often without merit.

In a context of generalised declines in public trust of institutions of authority, public management and administration, finds rife cause for doubt and cynicism among the public. This makes accusations against the IEC seem legitimate and when the outcome of an election is disputed, it casts a pall of doubt on the outcome. Across the continent this mode of behaviour has been a precursor and predictor of intractable, disruptive and debilitating social and political conflict.

The IEC has unfortunately been conspicuous by its absence in either explaining its processes, and decisions and dispelling and correcting the misinformation and myths spread about it.

The ANC and the EFF are the only two parties which received mentions within the top 50 words used in the IEC/elections narrative. This ought to be of concern to other parties, especially as they don’t feature in the top 50 mentions this close to the elections.

In the graph below (Fig.4) the ANC received the third highest mentions being bypassed only by the words "election" and "vote". The EFF received 11.7K mentions within the IEC/elections conversation, ranking it in 19th place of total volume of mentions.

Meanwhile, the country’s main opposition party, the DA, did not make it to the top 50 mentions (Fig.5), despite the party’s frequent expression of mistrusting the IEC, going as far as legally challenging the electoral body’s decision to reopen candidates’ lists. ActionSA leader Herman Mashaba is the only party leader who made an appearance in all three of these categories; volume, reach and engagement. 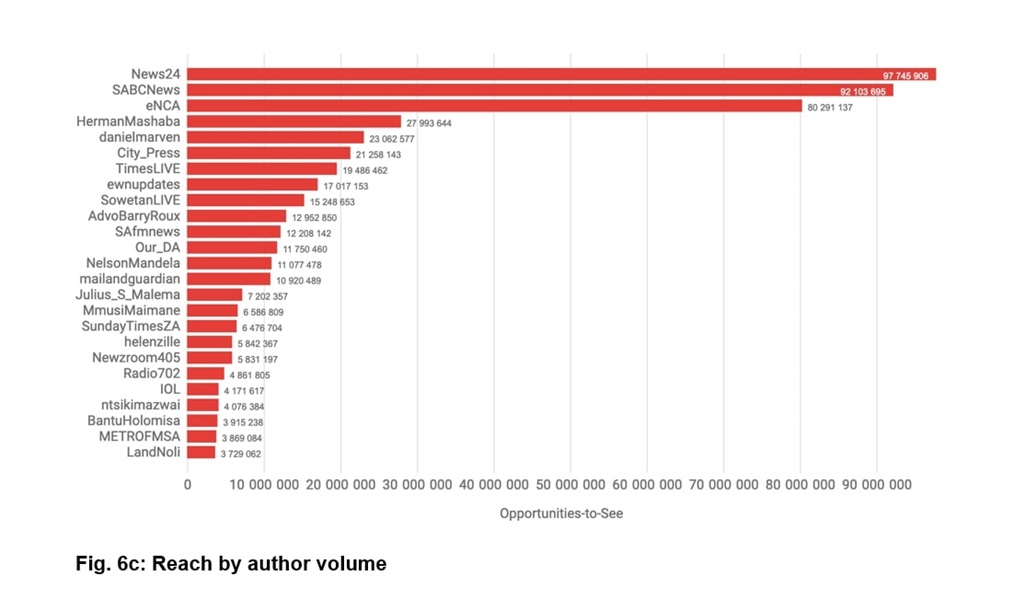 - Molebogeng Mokoka is with the Centre for Analytics and Behavioural Change (CABC).

*The research was conducted by Jesse Cann, Euston Witbooi and Sivuyisiwe Kuse at the CABC.

Lucky Sunday for 3 Daily Lotto players
Full list of lottery results
Lockdown For
DAYS
HRS
MINS
Voting Booth
Children between 12 and 17 can now be vaccinated against Covid-19. As a parent I am:
Please select an option Oops! Something went wrong, please try again later.
Relieved, it's been a long wait to this point
48% - 342 votes
A bit hesitant, and will wait to see how it goes
20% - 146 votes
Completely against my child getting the shot
32% - 225 votes
Previous Results
Podcasts
PODCAST | Ballot Box: Why Facebook is not doing enough against election misinformation