ANALYSIS | What it is like to lose a presidential election Chris Lamb writes that losing a US election can feel enormously crushing especially after putting in so many hours of campaigning.

For the winner of the election, the moment of victory brings unbridled joy and acclamation, applause, laughter, hugs and champagne to celebrate the biggest prize in politics.

This isn’t so for the loser, who must ultimately accept the responsibility for the defeat. 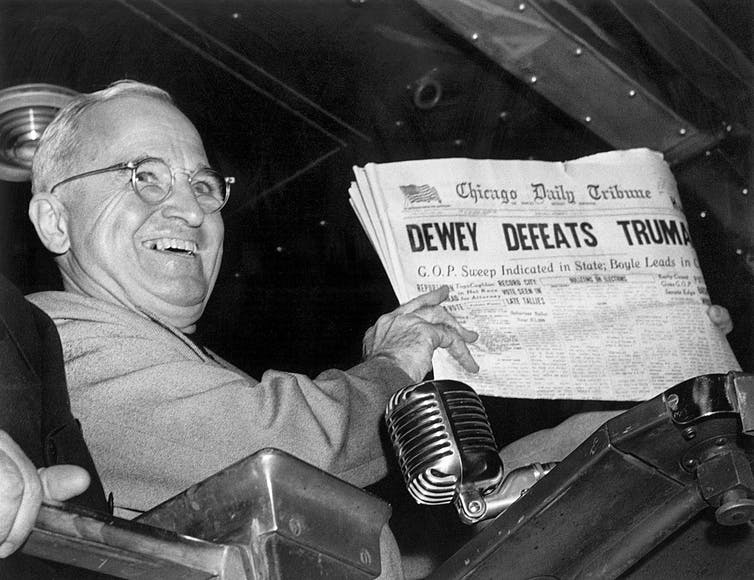 The winner is ecstatic – the loser isn’t. AP Photo/Byron Rollins

In my book, “The Art of the Political Putdown,” I tell the story of Thomas Dewey, the Republican presidential candidate in 1948, who was heavily favored to win the election – only to lose to Harry S. Truman, the incumbent.

On election night, according to one story, Dewey, the governor of New York, asked his wife, “How will it feel to sleep with the president of the United States?”

“A high honor,” his wife replied, “and quite frankly, darling, I’m looking forward to it.”

But Truman won the election. The next day at breakfast, as the story goes, Dewey’s wife said, “Tell me, Tom, am I going to the White House or is Harry coming here tonight?” Losing the presidency is a crushing defeat. The incalculable hours of giving speeches, campaigning and fundraising came to naught. The candidate feels like they have disappointed the millions of people who believed in them, who contributed to the campaign, who voted for them and who thought they were going to win.

In 2016, Democratic candidate Hillary Clinton woke up on Election Day ahead in most of the polls and thought she would become the first woman president. By the time the day was over, those hopes had faded, and by early the next morning, when she called her opponent Donald Trump to concede, those hopes had disappeared entirely.

“This is not the outcome we wanted or we worked so hard for,” Clinton told her supporters. “I know how disappointed you feel because I feel it, too … This is painful, and it will be for a long time.” When a person has committed so much to running for the president for so long, it’s not easy to let go. In the early morning hours of election night 2000, then-Vice President Al Gore conceded in a call to his Republican opponent, George W. Bush, then retracted the concession in another call when the results in the decisive state of Florida appeared uncertain. Thirty-six days passed before Bush’s victory was confirmed by the U.S. Supreme Court.

In her 2017 book, entitled “What Happened,” the title itself a statement of disbelief, Hillary Clinton remembered calling Donald Trump to concede the election. She said she offered to help him in any way she could. “It was all perfectly nice and weirdly ordinary, like calling a neighbor to say you can’t make it to his barbecue,” she wrote. “It was mercifully brief … I was numb. It was all so shocking.”

The 1960 presidential election between Democrat John F. Kennedy and Richard M. Nixon, the Republican vice president, remains one of the closest in history. Nixon said that he was advised by President Dwight Eisenhower to challenge the results because of cheating by the Democrats but refused, he said, because it would cause a “constitutional crisis” and “tear the country apart.” This, he added, would result in him being called a “sore loser” and jeopardize any chance of him running for president again.

When Nixon ran for the presidency in 1968, he was elected and then reelected in 1972, before resigning in disgrace in 1974. Nixon was the last person who won his party’s nomination after previously losing a presidential election. But if there’s little hope of a fresh attempt at the presidency, losing candidates have found second acts in American politics.

President Jimmy Carter, who was defeated by Ronald Reagan when he sought reelection in 1980, became an international human rights activist and won the Nobel Peace Prize in 2002. Gore became an environmentalist and shared the 2007 Nobel Peace Prize and a 2007 Academy Award for best documentary for a pioneering examination of climate change.

[The Conversation’s most important election and politics headlines, in our Politics Weekly newsletter.]

The transfer of power On Jan. 20, 1993, George H.W. Bush greeted the man he lost to, Bill Clinton, at the White House. Paul J. Richards/AFP via Getty Images

Losing is hard, but losing as the incumbent, as Carter and George H.W. Bush did, is probably harder. But Carter and Bush understood the importance of the peaceful transition of power.

President Donald Trump repeatedly has cast doubt on whether he will accept the results of the election and peacefully hand over power if he loses to Biden. This could well result in the constitutional crisis to which Nixon referred.

In early 2020, when the Democratic primaries were still going on, Trump again expressed his unwillingness to vacate the White House – which drew a retort from Pete Buttigieg, who ultimately lost the Democratic nomination to Biden. Buttigieg said he had an idea for handling Trump, joking “If he won’t leave, I guess if he’s willing to do chores, we can work something out.”

We live in a world where facts and fiction get blurred
In times of uncertainty you need journalism you can trust. For only R75 per month, you have access to a world of in-depth analyses, investigative journalism, top opinions and a range of features. Journalism strengthens democracy. Invest in the future today.
Subscribe to News24
Related Links
Donald Trump's dark campaign goes down to the wire, Joe Biden predicts victory
Drama expected as US goes to the polls to deliver judgement on Trump's presidency
US election: Everything you need to know about Trump, Biden and what’s at stake
Next on News24
Karyn Maughan | Land occupations: The EFF, the Constitutional Court ruling and the NPA's minefield