Ann Bernstein: Govt must abandon its developmental state ambitions and look to the private sector The government will need to trim down and function differently than before if it is serious about rebuilding South Africa, says the writer. (iStock)

Many low priority activities will have to be discarded in favour of a core set of actions necessary to ameliorate hardship and create the conditions needed for faster growth, writes Ann Bernstein.

The Covid-19 pandemic and the measures we have taken to combat it are likely to leave all South Africans poorer for a long, long time.

While we do not yet have the relevant data, some estimates of the number of jobs already lost run to well over a million, with hundreds of thousands of other people having experienced large reductions to their incomes for (at least) a few months.

The informal sector has been hit not just by lockdown-related measures that have halted trading, but by the shocks to employment and wages in the formal economy.

These have reduced the sales on which the owners of spaza shops, barbers and providers of childcare and other services rely.

Millions face much-reduced living standards, and an increase in levels of poverty and of absolute poverty.

Though the job losses are doubtless concentrated among the most vulnerable, employment shocks are being felt all the way up the income distribution chain.

Firms in some industries (retail, tourism and leisure, media) are being decimated, taking down not just their employees but their managers and owners too. Listed companies' struggles also mean that dividend income will be considerably smaller, with implications for incomes at the top of the distribution as well as for the country's pension funds whose membership include a broad cross-section of people.

Add to the decline in asset values - equities and property, in particular - and the dramatic depreciation in the rand, and the implications of the crisis on living standards are magnified even more.

A massive increase in unemployment and poverty is the last thing that South Africa needs.

Other upper-middle income countries - our peer group (for now) - have much larger proportions of their populations in work, much lower levels of poverty, and, consequently, much less inequality.

Our uniqueness, in this regard, is a consequence of an economic model that ensures that the demand for skilled workers exceeds their supply (increasing their wages), while demand for unskilled workers is nowhere near adequate to reduce mass unemployment.

Over the past few decades, the roughest edges of the poverty this model of economic growth generates have been ameliorated by the expansion of a highly redistributive state. But the state's ability to deliver on this mandate is constrained by its own many deficiencies and by the sheer scale (and, therefore, unaffordability) of what would be needed to end poverty purely through state-led redistribution.

The failure of this model and, indeed, its fundamental unsustainability have been cast into the sharpest possible relief by the pandemic and the lockdown, the starkest images of which, in the absence of mass illness, have been those of large numbers of people queuing for food parcels.

Somewhat belatedly, the government is starting to roll out some assistance to those who have lost their jobs in the form of expanded access to the UIF, guaranteed bank lending to businesses to cover their operational costs, and direct assistance to the poorest through social grant top-ups and a new grant for the unemployed.

This last grant and the top-ups are supposed to be temporary, although how they will be unwound in six months' time - when most recipients will be just as poor and desperate as they are now - is hard to envisage.

Whether it will be affordable given the high likelihood that South Africa will face years of what Professor Michael Sachs describes as "debt distress" is also questionable, unless the government can (finally) muster the courage to cut some of its least impactful spending programmes.

Interestingly, the likely catastrophic effect of the pandemic on employment and poverty may not be matched - at least initially - by a rise in inequality.

This is because a substantial fraction of the income of South Africa's poorest households is provided by the state, which will likely continue to do so throughout the crisis.

That means that a larger proportion of the incomes of middle- and upper-income households is "at risk" in this crisis, so it may be that income inequality is today somewhat less unequal than it was two months ago.

This relative improvement is not likely to last.

When the economy does start to recover, those with skills and workplace experience are most likely to see their incomes rebound most quickly and most completely.

As that happens, inequality will increase once again. Indeed, it may well get worse because it is increasingly feared that the recovery from the Covid-19 crisis will be slow.

This has enormous implications for the country: not just higher levels of unemployment, poverty and inequality, but a state with far less fiscal capacity to play its redistributive role.

A smaller economy delivers less taxes and a much larger fraction of taxes will have to be devoted to servicing the debts we have accumulated in the past and those we are incurring now in response to Covid-19.

The bottom line is that unless South Africa emerges from the Covid-19 emergency with a real plan to accelerate growth dramatically and sustainably, it may come to be seen as the final nail in the coffin of an economic, social and political order whose unsustainability was already driving us towards a fiscal crisis.

To avoid this fate, we all need to recognise the limits of what a tax-and-redistribute model can achieve.

All of our focus must turn to concentrate much more squarely on the need to build an engine for much faster and much more labour-intensive growth. 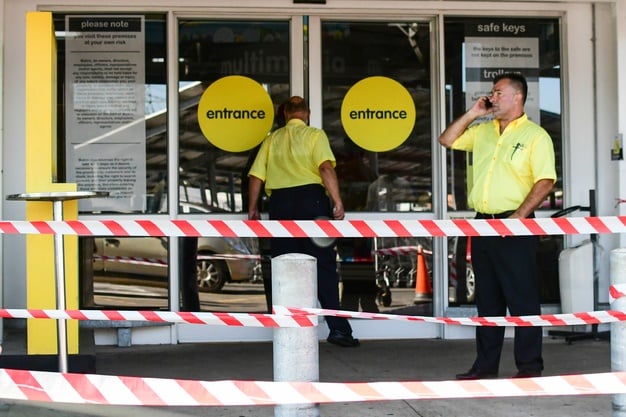 Store managers outside a local retail chain as citizens stockpile ahead of the lockdown. (Darren Stewart/Gallo Images)

Prerequisites for sustained growth include sound policies and institutions that support high levels of investment, prudent fiscal and monetary policies, integration into the global economy, and a commitment - by the whole of society, including the government - to prioritise long-term development over more parochial, shorter-term preferences.

Getting from here to there will require the rewriting of our existing social contract. We will have to make sure that it is easier to start and run businesses and less risky to employ people.

The state will have to get rid of its developmental state ambitions and deliver infrastructure, network services, skills and many other functions in partnership with the private sector and new coalitions of non-government actors.

We will need to strengthen areas of capacity in our society - such as some of the metros and provinces - in order to ensure delivery and value for money in much constrained circumstances.

And we will need a much more determined and speedy effort to deal with corruption.

The current state will need to be slimmed down and skilled up.

Many low priority activities will have to be discarded in favour of a core set of actions necessary to ameliorate hardship and create the conditions needed for faster growth.

The key challenge lies in getting this new approach to work well enough that it can overcome the inevitable challenges to its legitimacy from today's relatively privileged public servants, the ideologues and looters (not necessarily the same people) in the ruling party, and the owners and managers of the least competitive businesses.

Can we do it? We have to. The alternative is too ghastly to contemplate.

- Ann Bernstein is the executive director of the Centre for Development and Enterprise (CDE).

We live in a world where facts and fiction get blurred
In times of uncertainty you need journalism you can trust. For 14 free days, you can have access to a world of in-depth analyses, investigative journalism, top opinions and a range of features. Journalism strengthens democracy. Invest in the future today. Thereafter you will be billed R75 per month. You can cancel anytime and if you cancel within 14 days you won't be billed.
Subscribe to News24
Related Links
Coalitions create instability. SA needs a strong government
South Africa needs a new social compact
Next on News24
IN-DEPTH | 'We're heading in for a strike': Expert on public sector wage negotiations