Cape Town water crisis: 7 myths that must be bust One of South Africa's biggest cities, Cape Town, is gripped by a rising panic. People are haunted by the idea that they may soon have to queue for water, carefully rationed out by local authorities under the watchful eye of the army.

But these doomsday scenarios need to be tempered. It's true that the first step to getting people motivated to save water is to create the "impression of a crisis". In Cape Town, however, this impression is being blown out of proportion by a number of myths that are perpetuated in social and popular media.

This myth has it that the City of Cape Town saw the drought coming but didn't prepare for it.

A study by the University of Cape Town came out a few weeks ago, saying that the odds of the drought carrying over again into 2017 were less than one in one thousand. Understandably, they exonerate the Cape's government from blame for the water crisis.

This myth has it that the city didn't enforce restrictions to curtail water wastage.

Cape Town's superior performance is due to its campaign introducing some pretty original stunts. For example:

This myth has it that water saving campaign unfairly targets the residential sector.

Houses in warm climates use at least half of their water outdoors. Houses with swimming pools in Cape Town use far more water than those without. This shows that not only is the residential sector using the vast majority of municipal water, but traditionally, most of the water used by this sector is for luxury purposes. 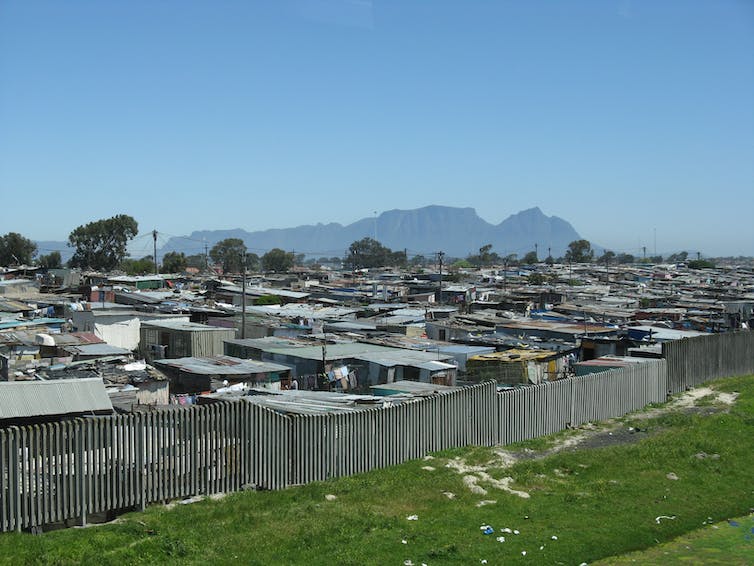 Informal settlements in Cape Town only use 4.7% of the city's water. Flickr/Blackwych

Myth 4: Lots of water is being lost to leaks

Water lost from the system is called "non-revenue water". Australia and New Zealand have the best water systems in the world, and lose 10%. South Africa as a whole comes in on par with the world average of 36.6%. Cape Town loses only 15% of its water. It's close to being one of the best systems in the world.

Myth 5: Desalination plants are the answer

There is a chance that by the time such a plant is built, the drought would be over. The city would be left with a very expensive white elephant.

Cutting water use is the most important, fastest and most cost-effective way to avoid Day Zero. Nevertheless, due to the severity of the crisis, water supply schemes are also being built. These range from smaller desalination plants to groundwater extraction. These projects should be supplying up to 240-million extra litres into our system by May 2018. These new supplies, combined with target water savings, can get Cape Town through next year's summer.

Water wastage provokes anger and indignation, as it should. But some are unfairly blamed.

Fire fighting uses non-potable water from estuaries and reservoirs as well as potable water from hydrants. Fire hydrants fall under "non-revenue water". They can't use seawater because salt damages the equipment.

Blame shifting, fault finding and panic are usual reactions to water crises all over the world. Some anxiety is good, as it motivates water saving, but blame shifting actually pushes responsibility away, and causes water wastage. The best attitude Cape Town’s people can adopt is for every person to do their best, together. The world is watching, let’s set them an example to follow.

- David W. Olivier is a Postdoctoral Research Fellow at the Global Change Institute at the University of the Witwatersrand.

We live in a world where facts and fiction get blurred
In times of uncertainty you need journalism you can trust. For only R75 per month, you have access to a world of in-depth analyses, investigative journalism, top opinions and a range of features. Journalism strengthens democracy. Invest in the future today.
Subscribe to News24
Related Links
Cape Town's water woes nothing new for Khayelitsha, Dunoon residents
Cape Town city manager given special powers to deal with water crisis
Seoul and Cape Town: Two world-class cities facing potential catastrophe
Next on News24
Ebrahim Fakir, Molebogeng Mokoka, Euston Witbooi | The ups and downs of the municipal poll

Lucky Sunday for 3 Daily Lotto players
Full list of lottery results
Lockdown For
DAYS
HRS
MINS
Voting Booth
Children between 12 and 17 can now be vaccinated against Covid-19. As a parent I am:
Please select an option Oops! Something went wrong, please try again later.
Relieved, it's been a long wait to this point
51% - 3152 votes
A bit hesitant, and will wait to see how it goes
21% - 1284 votes
Completely against my child getting the shot
29% - 1804 votes
Previous Results
Podcasts
PODCAST | Ballot Box: An end to 'vat en sit' coalitions and how they will be regulated in the future