FACT CHECK: How a lie about Bill Gates and a vaccine for the coronavirus exploded on Twitter

A lie about IT billionaire and philanthropist Bill Gates wanting to test a Covid-19 vaccine in Africa exploded on social media across the world over the past two weeks, resulting in widespread outrage on Twitter.

An analysis of social media activity in South Africa and abroad shows the denunciation of Gates – who never mentioned testing any vaccines anywhere – started with several false Facebook posts in France, before it was imported to our shores, helped along by several influential Twitter accounts. On Saturday, a News24 story, which has since been retracted, gave the false narrative impetus.

News24's investigations team set out to trace the kernel of the fake news story in the wake of our apology to the Bill and Melinda Gates Foundation.

On 27 March, a Facebook post in French warned Africans not to take a vaccine "created" by Bill Gates as it was designed to "destroy Africa", according to the DFRLab.

The warning was attributed to a French doctor named Didier Raoult, the DFRLab reported, who is a "French physician and microbiologist specialising in infectious diseases [who] made a name for himself after claiming that the anti-malarial drug chloroquine was a cure for COVID-19".

But Raoult's employer denied he authored the post on his behalf and following a fact check by AFP debunking the post on 1 April, it was flagged by Facebook as containing false information. Several iterations of the post still exist.

The original post which had around 47 000 shares, was later removed. But not before it was picked up by a fringe site called EN24.news, and then retweeted by a US politician that served several terms in the US House of Representatives, Cynthia McKinney. 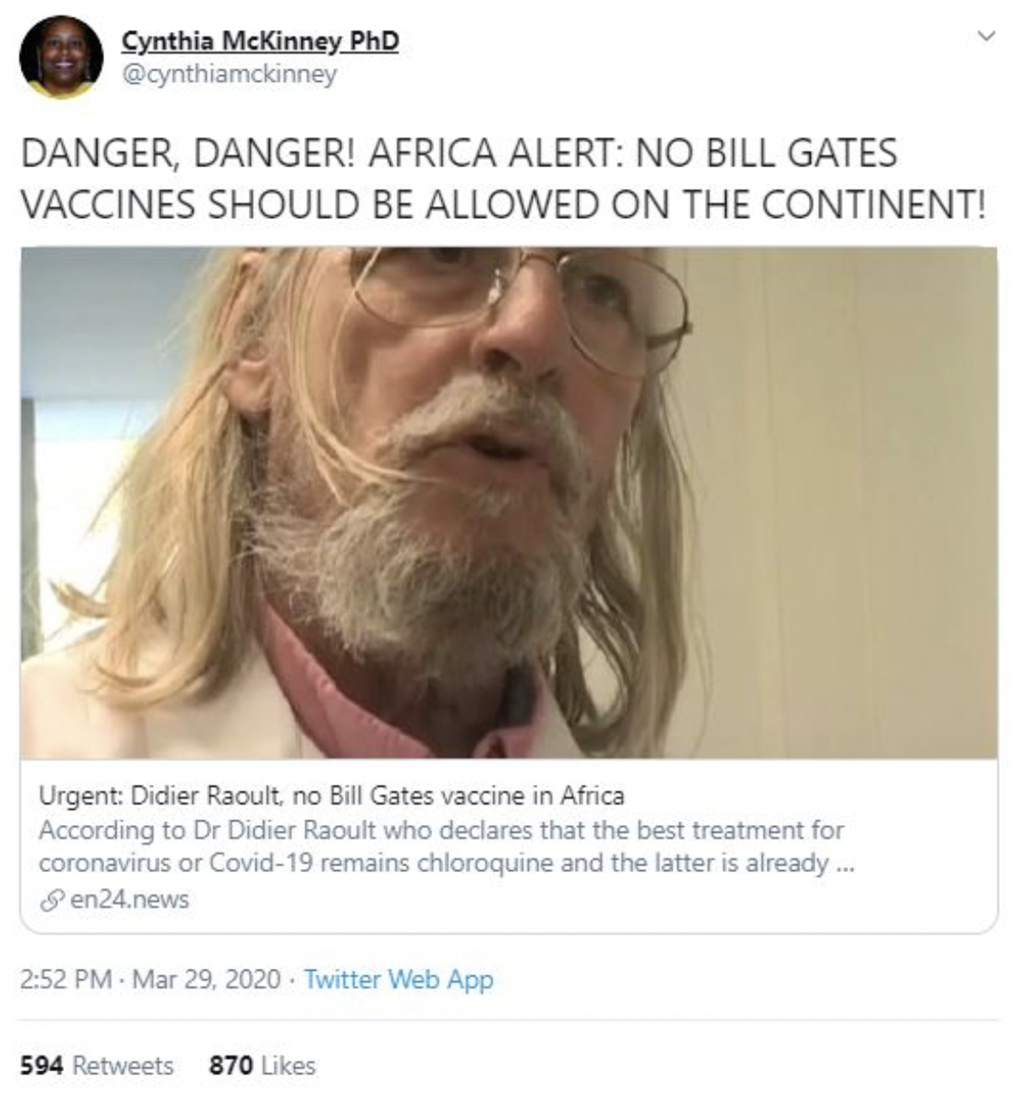 A screenshot of former US Congresswoman Cynthia McKinney's tweet with a link to a fringe news site that based its story on dozens of viral Facebook posts that warned Africans to steer clear of vaccines "created" by Bill Gates, as it was "designed to destroy" them. Facebook has since flagged some of the Facebook posts as containing false information, but this tweet was retweeted by South African influencer account, LandNoli. Tessa Knight/DFRLab

It was at this point that the false narrative was first picked up by South African anonymous influencer account @LandNoli nicknamed Izwe Lethu on Twitter, that retweeted McKinney’s tweet with a link to the fake news site to its 66 000 followers on 29 March.

On Saturday 4 April, News24 published an article titled "Bill Gates confident a potential coronavirus vaccine will work in Africa, but Twitter does not think so", based on responses to a tweet by President Cyril Ramaphosa. Ramaphosa’s tweet stated that Gates was assisting with testing and research - not vaccines - and he posted a short clip of a 22-minute interview Gates had done with The Daily Show host and South African comedian, Trevor Noah.

The responses to the tweet were excessively critical of Gates and Ramaphosa, and interpreted the content as confirmation of the conspiracy that Gates intended to test vaccines in Africa – now apparently with Ramaphosa’s help.

As Noah later pointed out on Twitter, neither he nor Gates mentioned vaccines being tested in Africa once during the entire interview.

Gates is a founder, together with his wife Melinda, of the Bill and Melinda Gates Foundation, that has contributed hundreds of millions of dollars on fighting and researching infectious diseases around the world, including HIV and malaria, and this week announced the Foundation would be spending potentially billions of dollars on building factories for seven companies leading the search for a vaccine for Covid-19.

Gates said that it would potentially be wasting billions as probably only two of those vaccines would materialise.

READ: Apology to the Bill and Melinda Gates Foundation for 'Africa vaccine' story

But a deeper analysis by Jean le Roux, a research associate for the DFRLab, shows that anti-Gates sentiment was being punted by the same Twitter users for several days leading up to the News24 story, pushing many users of the app to believe that Gates really did intend to test the vaccines in Africa. Various vaccine trials have started in numerous countries around the world, but an effective vaccine is yet to be developed.

By the time Ramaphosa tweeted the clip of Noah’s interview with Gates, the anti-Gates sentiment had already gained a significant foothold on South African Twitter driven by key influencer accounts, including the Barry Roux account, as well as singer and author Ntsiki Mazwai and another well-known influencer, @LandNoli.

The analysis also shows that mentions of Gates gained traction on Twitter, 10 days before the News24 article was published, starting on 25 March with two significant spikes before 5 April.

The comments on Ramaphosa’s tweets were, seemingly, largely informed by false information tweeted about Gates in the preceding days and the News24 story based on those responses.

Analysis of mentions of Bill Gates on SA Twitter accounts for past 14 days. Jean le Roux/DFRLab

A graph showing mentions of Bill Gates on Twitter accounts in South Africa for the past 14 days shows three distinct spikes in activity.

The first, shows a small increase due to a fake news article posted by Twitter user @SizweLo about Gates. Then, on 31 March, author Ntsiki Mazwai’s tweets about Gates drove a larger amount of traffic. The largest spike however comes on 4 and 5 April, when News24 published our incorrect report.

On 24 March, Gates gave a question-and-answer type interview on TED Connects and gave insights on how the response to the Covid-19 pandemic should be handled, and said businesses should remain closed.

Bill Gates is launching implantable chips which will be used to show whether a person has been tested and vaccinated for Corona. These microchips will dissolve under the skin, leaving identification 'quantum dots'. These implants and can also be used as a form of ID. pic.twitter.com/5VibJlTyN1

@SizweLo linked to a 19 March article on the website ‘biohackinfo.com’ which was debunked by the Reuters fact checking team.

We told you Bill Gates was a dangerous man

On 31 March, Bill Gates trended on Twitter in South Africa, sparked by fake posts on Facebook originating in France, warning Africans against the "Bill Gates vaccine".

The DFRLab’s research assistant Tessa Knight took a closer look, and found how the discussion had entered South African social media space after originating in France, then the retweet of a tweet by former US congresswoman by well-known local influencer account Izwe Lethu (@LandNoli).

Isolating posts using the term "Bill Gates" between 6:00 and 23:00, the DFRLab identified Mazwai was again among the chief proponents of the trend.

"Dear African child……When you hear the name Bill Gates….Run For Your Life!!!!!", read one of Mazwai’s tweets, gaining more than 1 700 likes and 400 retweets.

A second tweet about Gates on the same day gained around 1 000 retweets and likes:

Fuck Bill Gates and his fucken white saviour and Jesus Complex!!!!!
Fuck him!!!!

Using Brandwatch, a social media analytics tool, the DFRLab isolated mentions of "Bill Gates" between 06:00 and 23:00 on 31 March 2020, and ordered these in terms of their impact.

This showed the top mention was by well-known influencer account @AdvoBarryRoux, which tweeted to more than 850 000 followers that "Africa must not accept Bill Gates’ coronavirus vaccine. Let him take it where it is needed the most. Italy, UK, Spain etc needs Bill Gates’ #Covid19 the most [sic]".

The discussion on 4 April centred around Noah’s interview with Gates, retweeted by Ramaphosa. The first mini-peak consisted mostly of claims calling for Ramaphosa and his family to be used for the vaccine tests first, as well as swipes against Noah for doing the interview in the first place.

The comments from this tweet by Ramaphosa were used by News24’s reporter to base the now retracted story on.

The @GatesFoundation has supported our health needs for many years. They have offered assistance with innovative mass-based testing kits and research. I spoke to @BillGates and he commended the swift and decisive action South Africa has taken on #COVID19. pic.twitter.com/CSfFLYqnzA

The News24 story further augmented the discussion during this time, as many of the above mentioned accounts used it as a justification of their views, the DFRLab found.

The peak on 5 April was mainly driven by these tweets, including News24’s retraction and apology tweet published at 18:55, causing another major spike in mentions of Gates on Twitter.

As of Monday morning, Mazwai and others who propelled the anti-Gates vaccine narrative were sticking to their guns, arguing against a vaccine (which does not exist yet) being tested in Africa and now claiming that News24 had been paid by Gates to retract the story.

On Monday the leader of minority political party ATM, Vuyo Zungula, tweeted a letter by his party that he had written to Ramaphosa, asking for a formal response to the conspiracy theories and fake narratives that circulated on social media, particularly Twitter, since 31 March.

Related Links
Man who posted fake contaminated Covid-19 test kits video in court, media barred from covering
Is your mother unknowingly spreading fake coronavirus news on WhatsApp? Here’s how to help her stop
Coronavirus | A three-month timeline of the global spread and reaction
Share
Next on News24
Friday Briefing | Behemoth: The return of ANC dominance 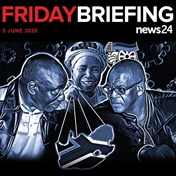