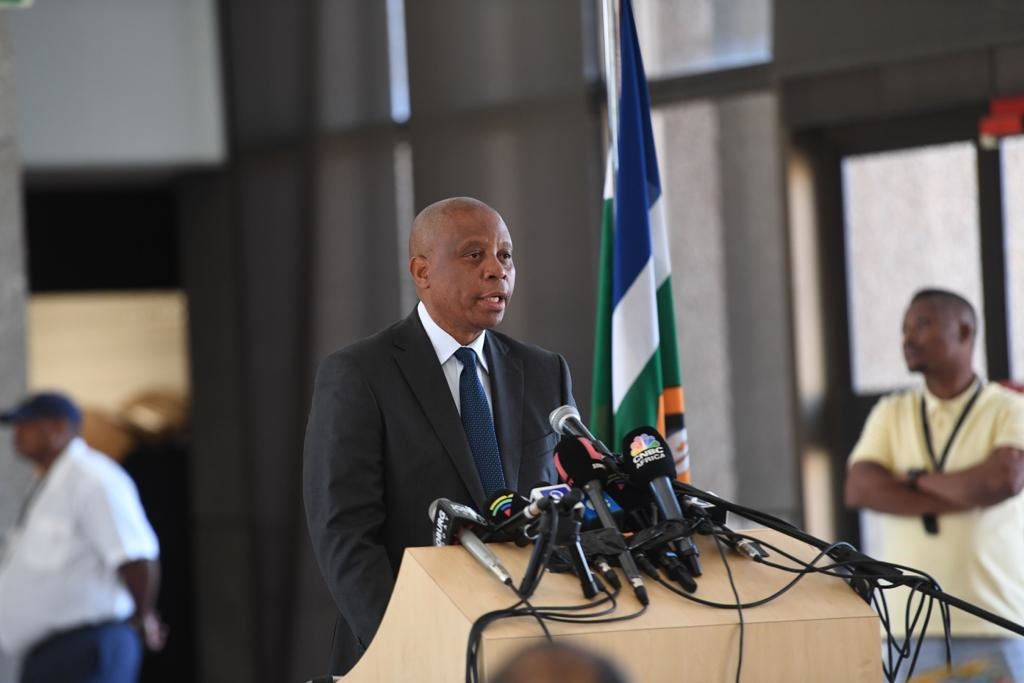 DA leader Mmusi Maimane has cut a forlorn figure over the last 24 hours.

On Sunday he had to grit his teeth when his predecessor and bête noire Helen Zille completed her stunning comeback to politics with her election as chairperson of the party’s federal council. And on Monday he stood by while Herman Mashaba, the Mayor of Johannesburg and another drop-in DA leader, hammered the party while announcing his resignation.

Maimane, leader since 2015, is facing a grim and uncertain future. Under his watch the party seems to be coming apart at the seams, with a disastrous election result in May being compounded by a series of by-election defeats and internal ructions now spilling over into the public domain.

Herman Mashaba says he chooses country over party.Says he has lived his life on his own terms. Thanks EFF and Maimane. TheDA leader, calls Mashaba a friend and a comrade, and says, to a man who just trashed the party and attacked its new chair of federal council, you are my hero.

Monday’s remarkable events at the Johannesburg Civic Centre however are sure to harden opposition against him even more.

Despite a frantic 24 hours in which he tried to convince Mashaba not to resign his mayoralty, Johannesburg’s first citizen did exactly that. In spectacular fashion he delivered a series of broadsides to the DA which not only laid bare his true feelings and ambitions, but came as another body blow to a party already crippled by indecision and division.

While Mashaba attacked his party as being the "most difficult partner in the city’s coalition arrangement" (and not the EFF), opposed to his "pro-poor" policies and lurching away from principles he believes in with Zille's return, a stoic Maimane sat in the front row.

When Mashaba concluded, Maimane stepped up to the podium and praised him for the work he did in the city and committed the party to continue in a governance arrangement with the EFF, despite the enormous cleavages between the parties’ ideologies and approaches to governance.

He then held Mashaba’s hand aloft, like a boxing referee after a bout, praising him, before adding, "You’re a hero to me… a hero…"

And this after Mashaba resigned his position and called a press conference to publicly launch an unrestrained and blistering attack on the party that he, Maimane, leads.

Mashaba, a favourite of the EFF, has now given the DA’s opponents ample targets to aim for.

His statement and actions tell the public that the DA were unwilling and difficult in his endeavours to ensure that the city is cleaned up and returned to a functional state. He told the public the DA doesn’t care about the poor and would rather prioritise the needs of the well-to-do. And he’s denounced Zille as emblematic of the party’s shift away from progressive politics and a return to white domination.

Maimane, by appearing next to him and praising him as a "hero", is now seen to be endorsing Mashaba’s parting salvo. It was remarkable: a party deployee publicly shaming the organisation and the party leader standing there all but cheering him on. It’s like a smiling President Cyril Ramaphosa standing next to Zandile Gumede, the disgraced mayor of the eThekwini metropolitan municipality, while she blasts the ANC leadership and then thanking her for her words.

Maimane is now in dangerous territory. His position has weakened significantly over the last 72 hours and there seems to be a buoyancy among his opponents.

Never seen a leader of a party standing next to someone rejecting the party. Ntate Maimane clearly shares sentiments but was not ready to go just yet.

The DA in Johannesburg is floundering. The instability at City Hall will be sought to be exploited by the EFF, a party with no track-record in government and whose governance mores are being shot to pieces with every passing revelation about VBS Bank looting.

The ANC, too, are champing at the bit to reclaim the mayor’s parlour in Braamfontein. The party has a deplorable record in the city, which led to voters ejecting it in the 2016 municipal elections. But they'll take what they can get.

Voters have punished the DA for its incoherence and infighting earlier this year and have been giving it more of the same medicine at subsequent by-elections. Its leadership’s inability to manage and retain Mashaba in Johannesburg and Patricia de Lille in Cape Town, the country’s two most important cities, will not go unnoticed.

And neither will Maimane’s vocal support for someone who launched a biting and vocal attack on the party.

This centre will most certainly not hold.

Related Links
The DA has been the most difficult coalition partner - Herman Mashaba
Outgoing Joburg Mayor Herman Mashaba is a 'friend and hero' - DA leader Mmusi Maimane
READ IN FULL | Herman Mashaba: I cannot reconcile myself with people who believe race is irrelevant
Share
Next on News24
EXPLAINER | 5 things you need to know about MEC Kegakilwe who died after short Covid-19 battle One person bags R343k in the Daily Lotto jackpot
Full list of lottery results
Lockdown For
DAYS
HRS
MINS
Voting Booth
Have you gone out to eat a restaurant since restrictions have lifted?
Please select an option Oops! Something went wrong, please try again later.
Yes I have
13% - 850 votes
No, but I plan to
16% - 1018 votes
No, and I don't plan to
70% - 4457 votes
Previous Results
Podcasts
PODCAST | THE STORY: Will removing statues representing oppression remedy ills of the past?