Yes, education and jobs 'belong to the same WhatsApp group' 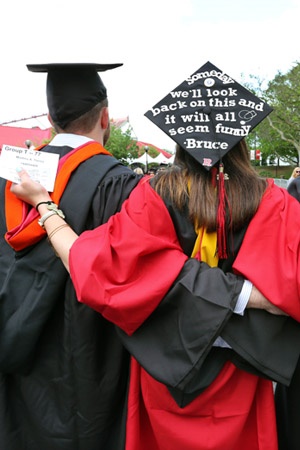 File: Graduating students (AP)
Reiterating his party’s support for free higher education, Julius Malema, leader of the Economic Freedom Fighters told supporters that "education and employment and business opportunities belong to the same WhatsApp group". Malema was speaking in Polokwane earlier this month when he said: "Today we know, that amongst graduates it is only 5% who are unemployed."

Africa Check asked the party’s spokesman for clarification, but Mbuyiseni Ndlozi is yet to respond to our questions. Does research support the EFF commander-in-chief’s claim? We took a closer look.

South Africa’s most recent official unemployment figures (for the third quarter of 2017) paints a similar picture. Statistics South Africa’s Quarterly Labour Force Survey, which collected information from around 30,000 households around the country, shows that people with a lower level of education are more likely to be unemployed.

Researchers have previously warned against using the term "graduate" to refer to all people who have obtained a tertiary education. This is because there is a big difference in the employment status of people with different tertiary qualifications.

Stats SA considers a person to be a graduate if they have attended a university or college and obtained a post-higher diploma, a bachelor’s degree, a post-graduate diploma or an honours, master’s or doctoral degree. People who have attended a Technical Vocational Education and Training (TVET) college or another tertiary institution and obtained a certificate, diploma (with or without matric) or a higher diploma fall in the "other tertiary education" category. This group had an unemployment rate of 17.8% during July to September 2017.

Graduates have a low unemployment rate because employers have more confidence in them, Van der Berg told Africa Check. "Employers have learned over time what they can expect from graduates." But graduates are not necessarily more competent or better qualified than people with other tertiary qualifications. "This is based on employer preference," Van der Berg said. "Graduates are more valued and we can see that in the salaries they earn."

Conclusion: The claim is correct, but only for university and college graduates

This article was produced by Africa Check, the continent's leading fact-checking organisation. Read it on their website here.

We live in a world where facts and fiction get blurred
In times of uncertainty you need journalism you can trust. For 14 free days, you can have access to a world of in-depth analyses, investigative journalism, top opinions and a range of features. Journalism strengthens democracy. Invest in the future today. Thereafter you will be billed R75 per month. You can cancel anytime and if you cancel within 14 days you won't be billed.
Subscribe to News24
Related Links
Overvaal: Where is the moral leadership?
My matric story: 'I didn't get a B pass but I still fulfilled my dreams'
Next on News24
SATURDAY PROFILE | Meet African named one of Time Magazine's 100 most influential people