Adriaan Basson: Eben Etzebeth should do the Boks a favour and return home 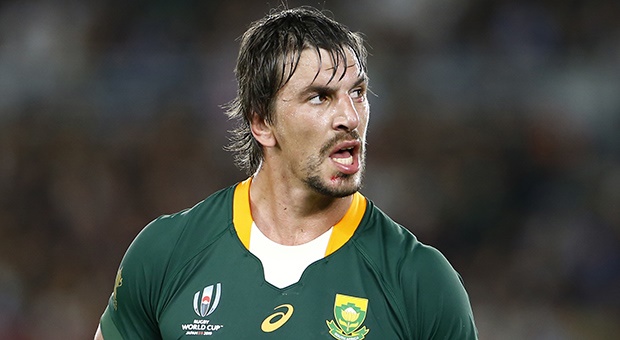 It is psychologically impossible for Eben Etzebeth and his teammates to park the events of the past two weeks' in their minds and pretend it never happened, until they come home from Japan, writes Adriaan Basson.

Etzebeth should do his team and South Africa a favour and return home to clear his name (he claims he is innocent) or face the music.

The Springboks are four matches away from winning the World Cup tournament currently underway in Japan. The team, captained for the first time by a black player in Siya Kolisi, is the pride of the nation and the country desperately needs the Boks to lift us out of our collective depression.

I get goosebumps just thinking of the possibility of Kolisi lifting the Webb Ellis trophy on November 2. South Africa has never been as ready for this victory.

To win the World Cup requires the team to be 100% focused on their game, strategy and competitors in the remaining four matches. The charges against Etzebeth are an unnecessary and potentially fatal distraction.

It is psychologically impossible for Etzebeth and his teammates to park the issue in their minds and pretend it never happened, until they come home from Japan. I can only imagine how hard it must be for his black teammates to have to accept the fact that they are scrumming down with someone who allegedly calls coloured people h*****s.

Etzebeth denies using the word and assaulting a coloured man in Langebaan at the end of August, but evidence against him is mounting. Last week, the Human Rights Commission opened a case of hate speech against him in the Equality Court in Hopefield, meaning they believe they have enough evidence from four witnesses to charge him successfully.

The police has assigned a new investigating officer to the case after the first investigation was allegedly botched and on Sunday more reports surfaced about the alleged thuggish behaviour of Etzebeth, his family and friends at a New Year's Eve party at Club Mykonos, published by the Sunday Times.

According to the newspaper, Etzebeth and his group are called the "Wolf Pack" and are notorious for causing trouble at the West Coast's pubs and bars.

SA Rugby (SARU), who has acted appallingly in this matter, has appointed a retired judge to investigate and adjudicate the matter internally. SARU president Mark Alexander was quoted in the weekend press, saying they couldn't send Etzebeth home now because he would sue SARU if proven innocent.

What utter rubbish. No court would fault SARU for asking an alleged racist and criminal to leave the camp while he fights to clear his name. No player has the right to be a Springbok or to represent their country at the World Cup.

These stripes are earned, on and off the field. Etzebeth is without doubt one of the best locks in world rugby, but he cannot and should not represent his country if he goes around beating up people and calling them racist names. (It is entirely irrelevant to my argument, but we have three more world class locks in the team and can win the World Cup without him.)

The claims against Etzebeth are not anonymous rumours on social media SARU can glibly dismiss. They are now part of at least three legal processes, where people have stated under oath that Etzebeth assaulted and insulted them.

It is unsurprising, of course, that SARU has so far refused to act against Etzebeth. The union set a principle when it didn't act against its own CEO, Jurie Roux, when he was implicated in defrauding Stellenbosch University of R37m in 2015.

Even after receiving a forensic report from KPMG detailing how Roux, as finance head of the university, used fraudulent codes to move student fees to the Maties rugby club, SARU refused to act against him.

A case of fraud is currently being investigated by the Hawks against Roux, and his accomplice Chris de Beer was arrested earlier this year. The university will arbitrate against Roux in November to get their money back.

SARU will not send Etzebeth home. He must do so of his own accord if he has the best interests of the Springboks and South Africa at heart.

We live in a world where facts and fiction get blurred
In times of uncertainty you need journalism you can trust. For only R75 per month, you have access to a world of in-depth analyses, investigative journalism, top opinions and a range of features. Journalism strengthens democracy. Invest in the future today.
Subscribe to News24
Related Links
Adriaan Basson: Mboweni's plan forces ANC to choose for or against SA
Adriaan Basson: A dark week for SA journalism
Adriaan Basson: Let the women lead us into a better future
Next on News24
Adriaan Basson | The case for mandatory Covid-19 vaccinations in SA