Is this why Bosasa was never prosecuted? 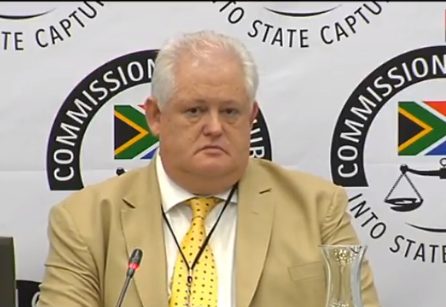 If it is possible for criminals to buy their way out of going to court, the criminal justice system will collapse, and rogues will further abuse the law to their own benefit, writes Adriaan Basson.

Is anyone surprised that former president Jacob Zuma is expected to be implicated by Angelo Agrizzi in Bosasa's nest of corruption?

I am certainly not. Zuma has showed himself over decades to be a politician for sale.

First the Shaiks, then the Guptas and now the Watsons, allegedly. Zuma does not discriminate against any benefactors who are willing to buy his political influence at the right price.

READ: Adriaan Basson - Bosasa and I

The biggest shock for me of the files Agrizzi is reportedly going to drop at the Zondo Commission into state capture over the next few days is the allegation that senior prosecutors were paid to let Bosasa off the hook.

As News24 reported on Sunday Agrizzi is expected to testify this week that senior prosecutors Nomgcobo Jiba and Lawrence Mrwebi, together with National Prosecuting Authority (NPA) senior staffer Jackie Lepinka were bribed by Bosasa to make the corruption case against them disappear.

All three strongly deny they were bribed and Agrizzi's allegations will have to be tested through corroboration and cross-examination.

The case against Bosasa concerns the paying of bribes to former prisons boss Linda Mti, his financial chief Patrick Gillingham and others to obtain outsourcing contracts of over R2bn from correctional services.

If it's true that NPA employees accepted bribes to delay and eventually kill off the case, it is the worst perversion of the rule of law this country has seen since the advent of democracy.

I have been trying to figure out for ten years why Bosasa, its CEO Gavin Watson and people like Agrizzi, who were essentially operating a tender racket fronting as a legitimate company, have not seen the inside of a courtroom.

While people like Jeff Radebe and Michael Masutha bandied about figures to supposedly show how South Africa was winning the war against corruption, the Bosasa case died a slow and silent death.

ALSO READ: Mandy Wiener - When the consigliere sings: What to do with Angelo Agrizzi?

Various explanations were forthcoming: the Hawks dragged their feet to finalise a forensic report; the first prosecutor assigned to the case was too slow; the Special Investigating Unit's report needed more evidence gathering, etcetera.

Even if some of these reasons were true, there is no excuse for this case taking longer than ten years to get court-ready. The SIU report, which I have read numerous times, has direct evidence of fraud, corruption, defeating the ends of justice and racketeering that should have formed the bedrock of an NPA prosecution.

Unfortunately, it seems that the reasons for the delay were more sinister.

The real picture emerging from Agrizzi's testimony is two-fold: firstly, it was in the interests of any ANC politician to keep the case out of court. Bosasa's net of corruption was spread far and wide and it would have brought down too many comrades to give any credence to the party's supposed stance against corruption.

Secondly, senior NPA players may have been bribed. Agrizzi is expected to testify how Lepinka, a former personal assistant in the office of consecutive national directors of public prosecutions, received money from Mti to distribute to Jiba and Mrwebi.

Mti was at the centre of Bosasa's capture of the correctional services department.

Mti and Lepinka are close and the allegation is that she provided Bosasa with insights into the NPA's progress reports on their case against the company.

If this is true, Lepinka should face the full wrath of the law.

It is unclear at this stage whether Agrizzi has corroborating evidence to prove that bribes were indeed paid to "snake" (Jiba), "snail" (Mrwebi) and "Jay" (Lepinka), but the commission has so far mainly focused on his version where other evidence exists.

A strong and trusted NPA is at the heart of a functioning democracy. If it is possible for criminals to buy their way out of going to court, the criminal justice system will collapse, and rogues will further abuse the law to their own benefit.

The Zondo commission should probe to the bone why the Bosasa case had gone nowhere in ten years. Jiba and Mrwebi are facing a separate inquiry into their fitness, but it would greatly assist Zondo's work if they could explain why the case stalled with them in charge.

And advocate Shamila Batohi, who starts as the new national director of public prosecutions in less than two weeks, should use this case as a textbook example of how the NPA should not run its business.

We live in a world where facts and fiction get blurred
In times of uncertainty you need journalism you can trust. For 14 free days, you can have access to a world of in-depth analyses, investigative journalism, top opinions and a range of features. Journalism strengthens democracy. Invest in the future today. Thereafter you will be billed R75 per month. You can cancel anytime and if you cancel within 14 days you won't be billed.
Subscribe to News24
Next on News24
Adriaan Basson | Stellenbosch: Reconciliation can't replace justice, but both are important

Here are the Daily Lotto numbers
Full list of lottery results
Voting Booth
Have you and your family been counted in Census 2022?
Please select an option Oops! Something went wrong, please try again later.
Yes
47% - 4081 votes
No
53% - 4540 votes
Previous Results
Podcasts
PODCAST | The Story: Teen who murdered his mother gets 25 years behind bars