Dear Mmusi 'mini-Mandela' Maimane, what have you done for SA? 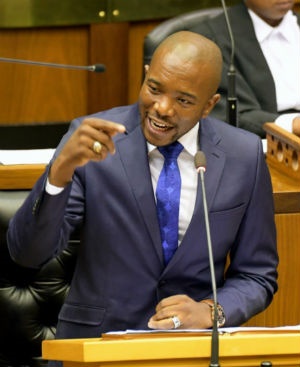 Political delusion is a phenomenon that has caused great harm to societies, inhibiting people from achieving their utmost potential. It is often political leaders that spread delusion, making it into a prevailing truth and narrative.

In this instance, society is all the poorer when leaders delude citizens about what they stand for and what they possibly can achieve for them. When you waxed lyrically about being called mini-Mandela, you caused a social media uproar that had people laugh hysterically at you. You had been caught on camera saying, "People phone me. They are on Twitter, they are on Facebook, they say 'Mmusi Maimane you are a mini-Mandela. You are a sell-out of our people'".

This has all the hallmarks of political delusion. You believe a narrative that brings you closer to Mandela. In fact, your statement is loaded with a belief that being a "mini-Mandela" means you are an embodiment of Mandela's vision, politics, stature and legacy.

Mandela, a gallant and towering political icon, continues to live on in many forms. His legacy has been put in the spotlight in recent years as an entry point for discussions about our democratic transition. While he may have been a unifying figure during that transition, some look back and think more could have been achieved to put the country on a course towards social justice for all, as far back as 1994.

The demand to "seek ye first the political freedom" seems to have overshadowed the necessity to make socio-economic demands as part of the negotiations.

However, your mini-Mandela comment undermines the complexity of Mandela's legacy; the evolution of his politics and his remarkable sense of selflessness in attempts to put the country first while standing firm on certain grounds. Which Mandela are you a miniature version of, given that some, especially in your Democratic Alliance (DA) crowds, have embraced parts of Madiba and rejected other parts.

Mandela, once classified a terrorist and communist by his foes, was a freedom fighter. He earned his stripes. Where are yours?

Martin Luther King Jr said, "the ultimate measure of a man is not where he stands in moments of comfort and convenience, but where he stands at times of challenge and controversy." In times of challenge and controversy in the tumultuous 1940s Mandela chose the side of justice and opposed oppression. He joined the armed struggle, faced prison and lost his personal freedom for the benefit of the liberation struggle.

Where were you when students called for decolonisation in institutions of higher learning and the broader society as a whole? What do you understand of this call and how do you locate yourself in said discourse?

The greatest tragedy of our contemporary politics has been your inability to carve yourself an identity that you can own and be known for championing. You have oscillated between being seen as a proxy of hidden forces that use you within the DA and an impersonator of Barack Obama (in a bid to be charismatic), and you have claimed to be a mini-Mandela. This goes far beyond role modelling.

You have outsourced your independence and as a result made yourself politically vulnerable. This is why you find it difficult to appear in charge of the DA and leading it beyond being its face. When people think of Tony Leon and Helen Zille, your predecessors, they remember them distinctly for the things they stood for and the firmness with which they appeared to have influence over the organisation. The same cannot be said of you and it is saddening because it perpetuates a narrative that the DA is in the business of fronting via you.

This is possibly your last term as the leader of the DA and just almost 12 months to the next national and provincial general elections; yet, the DA appears to be at sea. When you intervene, it tends to look tactless and ill-considered.

You intervened on the Zille tweets saga. But you burnt your fingers, jumped the gun, undermined party procedure and that gave her enough ammunition to extinguish your manufactured rage over her tweets on colonialism.

You intervened during the (suspiciously handled) water crisis in the City of Cape Town and it was tactless, earning you great criticism from onlookers. This is because you undermined the dividing line (that you often lament the ANC for doing) between party and state. You are neither the mayor of the City of Cape Town nor are you the premier of the Western Cape. But there you were waltzing in and out pretending to be of some institutional authority to handle the crisis. The less said about how the DA has handled the Patricia De Lille saga the better.

You lead a party of political delusion. You believe you are indeed the most diverse organisation in the country. A cursory look at your top leadership and caucus in the National Assembly speaks to the contrary. The organisation's inability to be decisive and intentional about achieving diversity continues to stand out like a sore thumb.

Dr. Shahram Heshmat, writing on Psychology Today, commented that "delusions are fixed and false personal beliefs that are resistant to change in the light of conflicting evidence. Delusions are the extreme case of irrational beliefs. These beliefs are obsessive and cause emotional distress."

In Cape Town the DA has not managed to turn around life convincingly in any of the townships and outskirt areas. What does a mini-Mandela say in the face of all such destitution? Where does he stand? What shall he be remembered for?

Having become mini-Mandela in your deluded state you also became a mini version of yourself. It has helped those inside the DA who resist change because they only had half of you to deal with. In reality, the DA has weakened under your leadership and the greatest risk, given a more flamboyant (even though not substantively changed) ANC under Cyril Ramaphosa, is that it might lose support in the next elections.

In the 2016 local government elections, the growth of the party already deaccelerated compared to previous elections' growth rates. No party led by a leader suffering an identity crisis can emerge victorious.

Leaders tend to imbue their organisations with some of their characteristics. It is no wonder that to an extent the DA itself suffers an identity crisis. This was most evident when the party issued a statement commemorating the life of Chris Hani, a political giant whose politics you will never celebrate nor champion. Yet, your statement said "the DA remembers Chris Hani and will continue to work to realise his dreams for our country".

Hani was probably the last of the truer socialists in the Mass Democratic Movement (MDM). How opportunistic to even think you could realise his dreams? He must have turned in his grave.

Lastly, in the latest Bokamoso, reflecting on JF Kennedy's 1962 commencement address at Yale University, you said, "More than half a century later, we are seeing first-hand in our own democracy how myths – 'widely held but false ideas' – are employed to capture the narrative and deflect attention away from failures. This is something the ANC is very fond of doing. The longer it can keep the public attention away from its many failures, the better. But in recent weeks the practice has been turbocharged, with a more brazen rewriting of our history than ever."

Nothing can be more on turbocharge than you calling yourself a mini-Mandela in order to mask and deflect attention from the DA's failures in becoming a party that all South Africans can find a political home.

Nothing can be more brazen an attempt at rewriting history than you equating yourself with Nelson Mandela. Can the real Mmusi Maimane please stand up?

We live in a world where facts and fiction get blurred
In times of uncertainty you need journalism you can trust. For only R75 per month, you have access to a world of in-depth analyses, investigative journalism, top opinions and a range of features. Journalism strengthens democracy. Invest in the future today.
Subscribe to News24
Related Links
Nothing for us, about us, without us
DA's arrogance is political suicide
Maimane: We stand with the people who say Supra must go
Next on News24
Ryland Fisher | Covid-19 special grant: Govt will need to find more money to extend R350 payments

3 bag the jackpot in the Daily Lotto
Full list of lottery results
Lockdown For
DAYS
HRS
MINS
Voting Booth
As a child or as an adult, have you ever been a victim of bullying?
Please select an option Oops! Something went wrong, please try again later.
Yes, at school
55% - 4007 votes
Yes, at work
18% - 1281 votes
No, I've never experienced this
27% - 1992 votes
Previous Results
Podcasts
PODCAST | MISSING MATTHEW EPISODE 3: Decades of false starts add to a family's despair