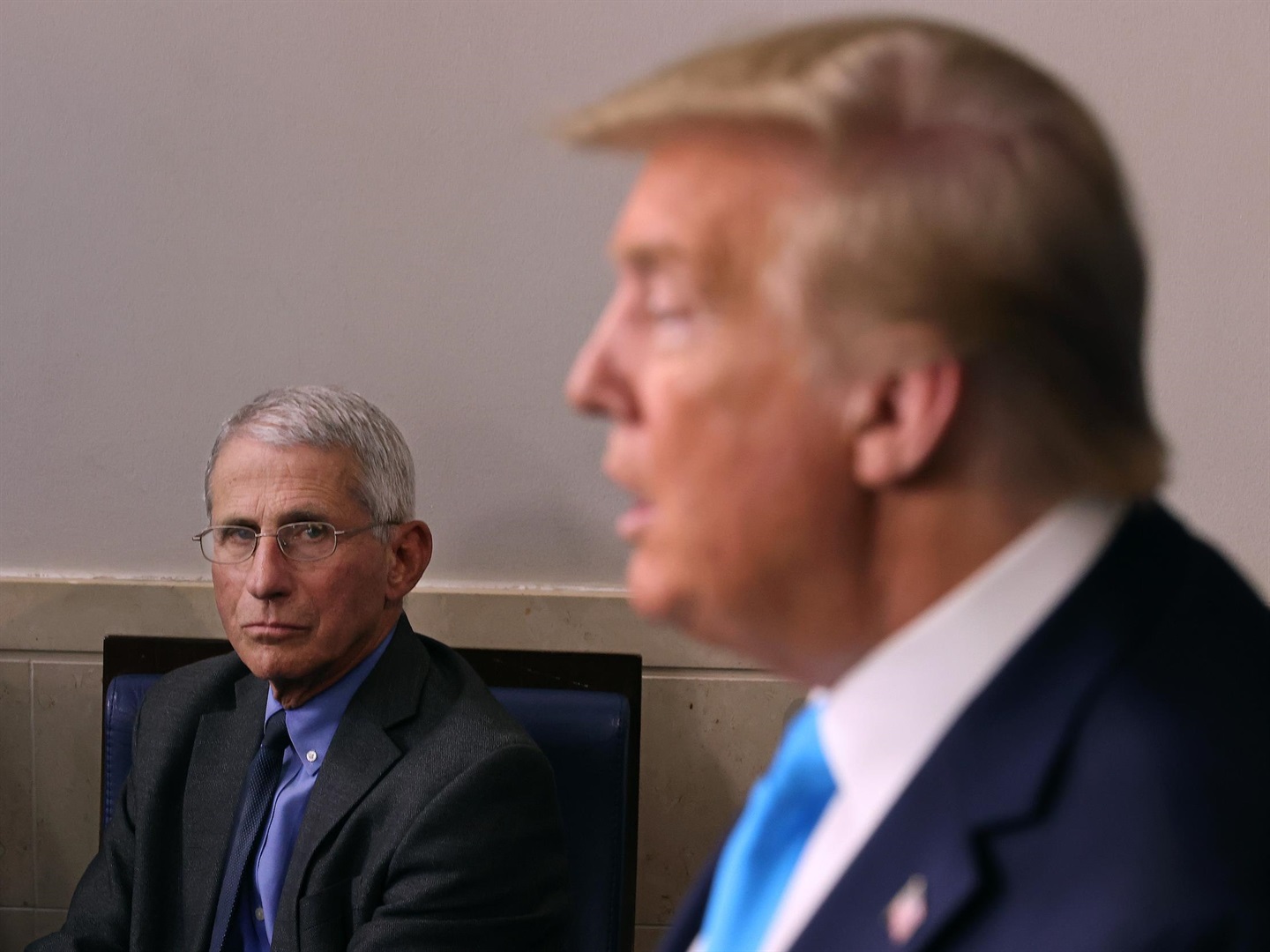 When the director of the FBI, James Comey, investigated Russian involvement in his election, President Donald Trump fired him. When a New York prosecutor pursued the Trump organisation, the president fired him. And four inspectors general, ethics watchdogs over national departments, got their marching orders this year.

But Trump may have finally met his match: the fit, 79-year old, five feet seven inches tall epidemiologist Dr Anthony Fauci, whose life has been dedicated to investigating and curing disease, doesn't seem to be going anywhere even if he is side-lined by the president.

This week Fauci, who has advised for Republican and two Democratic presidents since the 1980s, was instructed to be at the wrong place at the right time - in the White House at exactly the same time as a press conference on the pandemic was happening down the road, at the department of education.

The president hasn't spoken to him for six weeks, or taken a briefing even longer. Apparently banned from appearing on national TV, Fauci was frank with the Financial Times: Fauci thinks the pandemic is not under control, and opening the economies of many infected areas, which the president advocates, is premature.

"I have a reputation, as you probably have figured out, of speaking the truth at all times and not sugar-coating things," he said, "and that may be one of the reasons why I haven't been on television very much lately".

Fauci speaks softly and is unfailingly polite, but he won't shut up. After Trump talked to the media, Fauci was asked to verify the president's claim that the infection was "totally harmless" for 99% of those infected.

"I'm trying to figure out where the President got that number," Fauci said. "What I think happened is that someone told him that the general mortality is about 1%. And he interpreted, therefore, that 99% is not a problem, when that's obviously not the case."

Infections are soaring. America has 4% of the world’s population but 24% of its infections. More and more governors of both parties have appealed to the president to change his hands-off policy which has left the country short of medical equipment, to establish a national strategy including stockpiling essential equipment, and requiring private companies to make essential medical equipment that is in short supply. Trump wants the economy open and every child in school when term starts but his administration has failed to solve these shortages.

Fauci says opening the economy is a mistake in many states. But Trump can't fire Fauci for expressing an opinion he doesn't agree with. Fauci's position as director of the National Institute of Allergy and Infectious Diseases was made independent under a reform in 1978.  That reform made his post a career member of the Senior Executive Service (SES), a classification under the Civil Service Reform Act which provides that he can be fired only if he is found to have engaged in "misconduct, neglect of duty, malfeasance, or failure to accept a direct reassignment or to accompany a position in a transfer of function", or to be "less than successful [in his] executive performance". Any attempt to fire him would trigger hearings.

America is facing a growing list of new hotspots, including both states where Trump recently held campaign rallies without social distancing or compulsory mask usage. The rise in infections is so severe that several Trump-supporting governors have reversed their opposition to masks and are making them compulsory. Infections are getting worse in about 40 out of 50 states, with only a handful in the northeast still improving.

Trump's political problems are mounting. For the first time authoritative analysts are contemplating a possible landslide victory for his opponent, former vice president Joe Biden, and Democrats retaining control of the House of Representatives and even winning a narrow victory to give them control of the Senate in November's election.

"We don't use the word landslide lightly," wrote the respected website www.fivethirtyeight.com, but it saw a chance of a landslide for the first time based on Trump's increasing negative poll numbers. And the Cook Report, renowned for its careful, insider analysis of Washington politics, called the election a potential tsunami for Trump.

Trump may be distracted by legal woes. On Friday night he used his presidential powers to intervene in an ongoing trial to grant clemency to Roger Stone, a long-time friend and political fixer convicted of lying to Congress and witness-tampering. Stone's court appearances will continue, but his prison sentence has been erased by presidential decree.

After granting Stone clemency, Trump flew to Florida, one of the world's worst Covid-19 hotspots, to hold a fundraising event, and make a speech about drugs.

The Florida visit capped a tough week in which he suffered a Supreme Court defeat at the hands of the two justices he appointed, Neil Gorsuch and Brett Kavanagh, and his niece Mary published her long-awaited book in which her criticism of the president was only exceeded by her negative description of his father, Fred Trump.

Gorsuch and Kavanagh joined the four liberal justices and the chief justice in ruling against the president's claim that his tax returns could not be handed over to a New York prosecutor investigating him in a 7-2 decision. This means the returns will be made available to the prosecutor, though they may not be made public before the election. That will be determined by how fast the prosecutor, can work to bring a prosecution now that he has the tools.

The most damaging revelation in the book by his niece, Dr Mary Trump, was that Trump hired a friend, Joe Shapiro, to write his Scholastic assessment test (SAT), which is required to enter university. The White House denied it. Mary, a psychologist who frankly says her uncle needs to be "taken down", says the president suffers from a "long undiagnosed learning disability" that hinders his processing of information, and that he is so damaged by his own father's bullying personality that he is unable to empathise with others and is unfit for office.

Support for Biden is growing

Meanwhile support for Biden, the expected Democratic nominee for president, continued to grow as Trump's poll numbers declined. Biden, who makes few campaign interventions, has positioned himself as the would-be president with experience in managing crises in government with empathy for the public.

In the wake of the court decision, Biden called on Trump to make his taxes public, as Biden has done for 21 years. Trump is the first candidate of a major party to refuse to do so since 1976. The two nominees are expected to have three debates before the election, when it's likely that each will accuse the other of corruption.

Biden has said that if he is elected president, he will not intervene to curtail investigation of Trump or his businesses, but retired American presidents are rarely pursued in the courts.

When disgraced President Richard Nixon was forced to resign to avoid certain removal from office for corruption, his successor, President Gerald Ford, granted him a full pardon in the interests of national unity.

Related Links
US Supreme Court orders release of Trump records but they may stay hidden for now
Trump: 'I disagree' with Fauci on Covid-19 in the US
'Hubris and willful ignorance' - Trump slammed by niece in eagerly anticipated memoir
Share
Next on News24
OPINION | When the Stockdale Paradox moment beckons for the ANC