OPINION I Power FM debacle: An opportunity missed by Ramaphosa or an unwillingness to be held accountable? By withdrawing from the Chairman's Conversation on Power FM, President Cyril Ramaphosa missed an opportunity to take the nation into his confidence and be accountable for a number of issues bedeviling South Africa, writes Lukhona Mnguni

On Thursday, President Cyril Ramaphosa pulled out of the Chairman’s Conversation which was due to be hosted by Given Mkhari, the CEO and Founder of MSG Afrika Group, on his platform Power FM.

It would have been the third of such a conversation, having previously featured former president Thabo Mbeki and business mogul Johan Rupert.

Ramaphosa’s move was hailed as “courageous” as he yielded to pressure exerted by two (mainly) activist organisations, Wise4Africa and Soul City.

The first letter objecting to Ramaphosa’s appearance was sent six days prior to the event and he was urged not to associate with Mkhari an alleged abuser who assaulted his wife, businesswoman Ipeleng Mkhari.

The matter was widely publicised in July of 2018.

There is no doubt those incidents scarred the Mkhari family and while there may be no court verdict, Given seems to enjoy the veil of “family privacy” to account privately and not face public scrutiny on the matter.

At the height of the July 2018 incident, JJ Tabane attempted to hold Mkhari accountable on Power FM.

That act might have cost Tabane his Power Perspective slot in the station’s line-up.

This angered some listeners who felt Mkhari was not remorseful, instead opting to avenge the sense of humiliation he felt he was subjected to by Tabane.

On Thursday night, Thulasizwe Simelane did his best to hold Given accountable on eNCA, but the truth remains elusive in the story of the Mkharis.

On the other hand, the Presidency’s statement communicates a message of a leader who did not engage with the letter he received six days to the date.

The president himself did not even grant the activist organisations an audience, preferring to send “senior officials in the Presidency”.

Yet, these organisations were attempting to appeal to the president’s conscience and it does not rest in the souls of senior officials.

Strike one: the president was unwilling to be engaged.

Strike two: the president emphasised that his decision should not be “read as an endorsement of the untested allegations raised by the civil society organisations but a carefully weighed up decision taken in the public interest”.

But he fails to explain this public interest and he owes us an explanation so that we can gauge his depth of understanding of the seriousness of the call made to him by these organisations and others not to participate.

The President’s statement could have been more emphatic and called upon Given Mkhari to account to society, especially given his position in the media space that relies, to a large extent, on the ability to generate audiences of different types.

The Presidency’s statement was issued 15-minutes (17:45) to the hour of the event.

It carries an even more curious line, “unfortunately the resolution reached by the parties was too late to ensure his participation”.

This means there was a resolution which could have enabled the president to appear on the platform created.

South Africans were ready to hear their president speak on a wide range of issues.

To some it didn’t matter who would interview him.

This is where I feel the two organisations missed an important point.

They should have called for Mkhari to excuse himself and be replaced by one of his broadcasters.

To be honest, Mkhari has not proven to be the best moderator of these conversations.

However, Mkhari claims that an agreement was reached at 13:00 to have himself replaced.

The Presidency has not refuted this claim.

What then changed 4h45m later? The Presidency is either being disingenuous or unwilling to account fully on what swayed Ramaphosa to pull out.

All civil society formations should demand more from Ramaphosa, as he is one president who is held to the least standards of accountability.

Therefore, the request for Ramaphosa to withdraw further robbed the public of an opportunity to glean what the president is thinking on a number of key issues.

There are significant and worrisome developments in the country: reports such as the Inequality Trends in South Africa have been published; the economy continues to receive a grim outlook from the Reserve Bank and femicide continues unabated.

Could the Power FM interview have been a platform to deal head on with these issues?

The answer is yes.

When we demand accountability from those who are powerful we ought to do it in a way that will be sustainable, demonstrated through institutional reforms, public commitments and introspection.

Ramaphosa's withdrawal from the Chairman's Conversation through a statement further entrenches a picture of a president who is unwilling or at best reluctant to be publicly held accountable through the media.

The last-minute withdrawal appears to be a gimmick lacking sincerity.

- Mnguni is a PhD intern researcher in the Maurice Webb Race Relations Unit at the University of KwaZulu-Natal.

Related Links
Power FM chairperson responds to Ramaphosa cancellation: 'We have the right to privacy'
Ramaphosa pulls out of PowerFM Chairman's Conversation
PowerFM boss Given Mkhari and his wife appear in court for assault
Share
Next on News24
Anant Singh pays tribute to his friend Zindzi Mandela 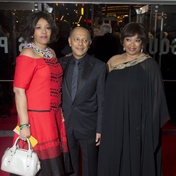 Here are your Lotto and Lotto Plus results
Full list of lottery results
Lockdown For
DAYS
HRS
MINS
Voting Booth
A few positive Covid-19 cases have been confirmed at two SA rugby franchises.. Should teams proceed with return to training protocols?
Please select an option Oops! Something went wrong, please try again later.
Yes, SA rugby is already behind the eight ball compared to New Zealand and Australia
12% - 452 votes
It’s too dangerous, the country is only now heading into the Covid-19 storm!
39% - 1511 votes
Get the ball rolling, Covid-19 is here to stay as the 'new normal'
49% - 1873 votes
Previous Results
Podcasts
PODCAST | THE STORY: What next for Gauteng as it overtakes Western Cape as SA's Covid-19 hotspot