OPINION: DSTV blew its chance to make the people love it 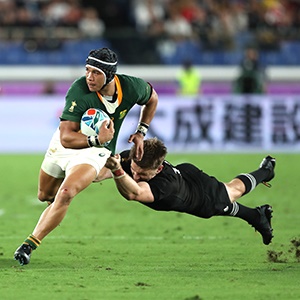 Cheslin Kolbe of South Africa is tackled by Beauden Barrett of New Zealand during the Rugby World Cup 2019 Group B game between New Zealand and South Africa at International Stadium Yokohama on September 21, 2019 in Yokohama, Kanagawa, Japan. (Photo by Mike Hewitt/Getty Images)

If played correctly, DSTV could have effectively become South Africa's national broadcaster, rather than a yet another private subscriber channel looking desperately for significance in a fast-changing landscape, writes Howard Feldman.

DSTV blew it. The broadcaster had a unique marketing opportunity that very rarely presents itself. And they missed it. They certainly didn't "try".

The Rugby World Cup is currently taking place in Japan. Although I am by no means a rugby fan, I am a South African fan which means that I support our national teams. It means that I worry how we are doing and watch the games that I am able to.

I am also a DSTV subscriber, which means that I am privileged to be able to do so. Not everyone, however, is that fortunate.

The national broadcaster, the SABC is in financial turmoil, which means that it is unable to afford to purchase the rights to broadcast the games. The events that lead to the crises aside, this means that the majority of South Africans do not have any access to the games. Considering that the SA team has a real chance of brining home the cup, that since 1994 rugby has assisted to unite a fractured nation and that the team has its first black captain, it is almost inconceivable that this is the case. But it is, and the SABC has made it clear that it is not in a financial position to be able to purchase the rights.

DSTV however is able to do so and is airing the games to its highest level of subscribers. This is where the opportunity for DSTV lies; whereas I do not believe that it is under any obligation at all to open up the viewing to all South Africans, the goodwill associated with it, and that would have been heaped on them is more than any marketing campaign could buy. They would unlikely lose regular subscribers, and would even, I imagine, be able to pass on some of the costs to their advertisers as a result of the increased numbers.

More than that it would display the spirit of Ubuntu that South Africans not only need, but also crave.

The private subscriber market is increasingly complicated for the likes of DSTV. With Netflix becoming more and more popular, and Apple TV a new interesting option, DSTV needs to find its relevance and place. And with the Rugby World Cup, it could have achieved just that.

If played correctly, DSTV could have effectively become South Africa's national broadcaster, rather than a yet another private subscriber channel looking desperately for significance in a fast-changing landscape.

Sometimes a marketing strategy requires companies to be brave. This move would have no doubt required courage. To date, what separates the broadcaster from the other entertainment networks is its sports offering, which means that opening it up to the public for the Rugby World Cup would seem to be counter intuitive. But it wouldn't be. Instead, doing so would allow potential subscribers to "see" what they are missing, it would create an emotional attachment to the company and a very powerful sense of "We owe them one". All these factors would only work in their favour.

A few months ago, Steve Hofmeyr offered to pay people to break their DSTV decoders. This followed his exclusion from one of their festivals. Whereas it is doubtful that many of his followers took up the challenge and received cash, there have to be at least a handful of sheepish rugby fans who are wondering if Steve will invite them over to watch the game. Even for them, the gesture would be a cool one. If not a bit of an "in your face" gesture.

For certain it would not harm them.

Whereas staying on the path that they have chosen, might.

For DSTV it is not too late to reconsider. South Africa might have lost the first game to the All Blacks but it is early days. As the tournament progresses, and as the country's chances increase, so will the frustration at not having access to the games. Instead of DSTV being viewed as the "victor" of the broadcasting war rights, it will be seen as selfish, elitist and even unpatriotic.

They need to act fast if they want to prevent this from happening. Not doing so would be an "own goal" (to borrow a soccer metaphor) if ever there was one.

We live in a world where facts and fiction get blurred
In times of uncertainty you need journalism you can trust. For only R75 per month, you have access to a world of in-depth analyses, investigative journalism, top opinions and a range of features. Journalism strengthens democracy. Invest in the future today.
Subscribe to News24
Related Links
OPINION | Spanking: Edging towards a nanny state (without the ability to nanny)
OPINION: SA is making headlines worldwide, and not in a good way
OPINION | SA has had a terrible week and the ANC needs to be held to account
Next on News24
Howard Feldman | Why we can be slightly optimistic about 2021 – despite the new Covid strain