The insufferable burden of being married to a runner... 2 weeks before the Comrades 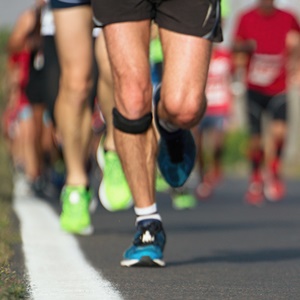 The shift is tangible. With the Comrades Marathon less than two weeks away, running friends have begun to view everyone with suspicion. For them, the dangers now lurk everywhere.

No runner can risk the incubation period between contamination and the day of the race. Hand shaking has ceased (along will all other human contact) in fear of catching a cold (or something) and the same people that intend pounding the road for 90km walk gingerly to not (heaven forbid) twist or strain something.

Running talk has increased from boring to deathly-boring. If 10 was the maximum level of mind numbing conversation, the chatter has now peaked at 12.5 as arrangements for the day of the Comrades, meeting points, flight details and dietary strategies consume all others. Tactics, gear, chafing and bleeding nipples, anticipated times and race time completion disclaimers are what they are able to talk about.

Everyone is strapped with something blue.

Runners are the thinnest they will ever be.

Over the next ten days, those who have run before will recount details of each kilometre of each Comrades run in magnificent, painstaking detail. Injuries will be explored and re-hashed with no tendon left unturned. Friends will be forced to listen to past achievements – much like watching home movies of someone’s holiday with their children.

Only no one grows up. And you don’t get tea and cake after.

Runners' spouses have it particularly hard. They might have initially been proud of their runner person. They might have bravely and even willingly accepted living their life as a single parent dominated by Comrades. It was a sacrifice that they would make in the name of love and commitment. But now they have just had enough.

They just can’t anymore. They are sick to death of people telling them how wonderful their spouse is when it was she (or he) who has suffered the early mornings, the stench of soiled running clothes and had their life dominated by their partner’s irrational need to run from Pietermaritzburg to Durban.

I witnessed this myself when one of the sweetest people I know turned on her runner husband with ferocity that had us gathering our children protectively in our arms and running for the door. It turned out that apparently, he had closed his eyes while sitting on the couch after a long lunch. She claimed he now did that everywhere and she was sick of being married to an old man. And it was because of the running.

I didn’t see the actual “closed eye” event myself as I was sitting on the same couch about to hit a REM sleep state when the eruption occurred. And I am not doing Comrades.

If spouses could send the runner to the start right now to wait for the gun, they would. But they can no longer pretend to smile with pride. They stopped that 2 weeks ago when training was at its peak and their mouth had set in what can only be described as a psychopathic and dangerous grimace.

Relationships are stretched, and spouses are ratty. They are now resentful and angry, and they hate what they have become. Worse than that, the runner hasn’t even noticed. Because as long as they are doing the mileage, as long as their ITB isn’t playing up and they are achieving PRs (formerly known is PBs) and as long as Strava is recording it, then all is good in the world of the runner.

Ask a runner’s spouse when was the last time the athlete asked how their day was and they will struggle to remember.

I am the world’s second worst runner – having recently discovered that my wife is actually less talented than me. I struggle to do 10km “fun runs” but do them anyway, and always find there is something spectacular about race day that I have difficulty describing. The atmosphere, the sense of comradery, the nerves at the start of the race, the blending of all South Africans, the marshals, the music, the weird runners all add to the magic of the day. Even the after-the-race-pain feels good and rewarding as though your body is thanking you for being so stupid.

I also understand the fear that a runner might experience. The training is gruelling, the sacrifice is significant, and the expectation is substantial. To blow it now because someone has a cold that they don’t mind sharing must be frustrating as all hell. And worse than that, it means starting it all over again next year when one’s spouse is a lot smarter and significantly more cynical than this year. It’s not a risk worth taking.

Apparently, Comrades runners are about to taper. That means that they become moody because they aren’t running enough. Which means that although they might be home for a little bit longer than they were last week, they are less pleasant to be around. Especially when all the extra time does is to give them more opportunity to talk about running.

We live in a world where facts and fiction get blurred
In times of uncertainty you need journalism you can trust. For only R75 per month, you have access to a world of in-depth analyses, investigative journalism, top opinions and a range of features. Journalism strengthens democracy. Invest in the future today.
Subscribe to News24
Related Links
Israeli-Gaza clashes: We are no closer to the truth
Kanye West and the culture of victim blaming
Living in a post-humour society
Next on News24
Howard Feldman | Antibody Donald Trump