Landisa: I am the son of a farm worker and I just published my own poetry My name is a Neville Pedro, a 34-year-old born on the farm Welbedag in a small-town in the Koue Bokkeveld in the rural Western Cape.

A month after I was born my dad Piet Morris was killed, and my mom Dinah Pedro – a farm worker – had to raise me on her own with help from family and friends.

My dad lost his life over a cassette player and that's almost all I know about him. My childhood was incredibly difficult and I was constantly reminded of the void my dad left behind when the other children spoke about their fathers.

All I had of my dad was a photo of him which I looked at every day before bed.

At school, I was often teased and bullied, and I grew up shy – often afraid of talking to people. Because I was so skinny I was an easy target, but it was those difficult times in my life that gave me the strength to move forward.

It was only in high school that I discovered writing which gave me a voice to start sharing what was going on inside. I started writing poetry which gave me the confidence to stand up for myself. It was the most liberating experience of my life.

However, at the time my mom lost her job and some of the most difficult times in our lives started. Our lives were consumed by simply surviving, and during school holidays I was forced to go work on farms to simply get enough money to buy bread.

I was convinced that I had to leave school to go work, and to cope I started drinking and smoking as a means of escape. I thought it would make everything better but it never did.

When the escape smoking and alcohol provided started wearing off I walked away from school because I simply couldn't handle things any longer. Everything was too much. Teachers often came to talk to me to encourage me but I didn't want to listen. The load I carried was simply too heavy.

Too many days my mom and I went to bed hungry, and we were dependent on friends who give us leftovers to survive.

It was then that Mr Manie Mars, my high school teacher, came to talk to my mother and encouraged me to go to the school hostel. Only then I was slowly able to pick up the pieces of my life.

After school, I lost all my poems – over 600 – when I had to move to Prins Albert Hamlet, roughly two hours from Cape Town, and started work as a farm worker. It still hurts thinking of the stories I've lost.

After 2013 when my son Elquin was born, I started looking for something more than farm work and dreamt of writing my own poetry collection. I knew it wasn't going to be easy, but I had a drive to do better and better – for the sake of my son and for my family.

Occasionally I cried while I wrote down my poems, but it forced me to tackle the demons inside of me.

A year ago I started sharing those poems on Facebook, and from there – like wildfire – it spread. 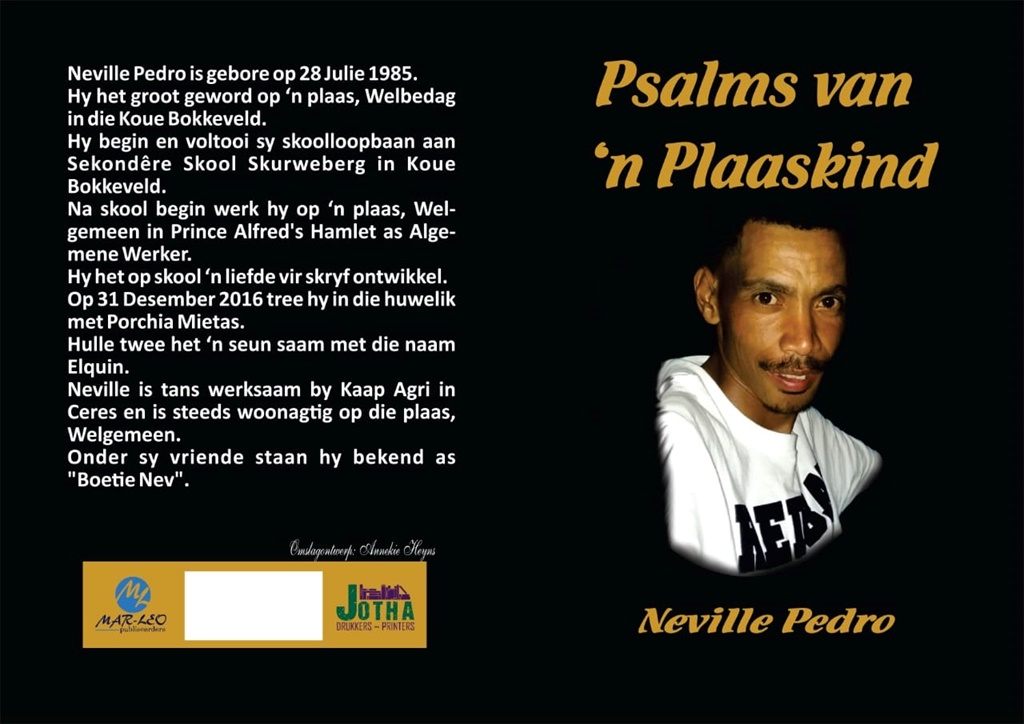 A publisher in Johannesburg contacted me and helped me edit my manuscript, but I had to raise the funds myself to publish it. I spent months fundraising – often organising markets and braais to raise funds to publish the book.

The book Psalms van 'n Plaaskind (Psalms of a Farm Child) was published last week, and it is the proudest I've ever been about anything I've done with my life. I wanted to do it, not only for myself, but to show every farm child that their dreams can come true no matter how hard it is. Every dream is achievable.

We live in a world where facts and fiction get blurred
In times of uncertainty you need journalism you can trust. For only R75 per month, you have access to a world of in-depth analyses, investigative journalism, top opinions and a range of features. Journalism strengthens democracy. Invest in the future today.
Subscribe to News24
Related Links
Landisa: What we tell ourselves to deal with anxiety is wrong – here's what I now do instead
Landisa: What the Springbok victory meant to me, a child from rural Eastern Cape
Landisa: My grandfather died shortly after his land was taken from him. What justice would mean...
Next on News24
LANDISA | Growing up queer in an Indian South African family

1 person bags the Daily Lotto jackpot
Full list of lottery results
Lockdown For
DAYS
HRS
MINS
Voting Booth
When a Covid-19 vaccine for under 16's becomes available, will you be taking your children to get it?
Please select an option Oops! Something went wrong, please try again later.
Yes, immediately!
37% - 2907 votes
I'll wait to see how others respond
26% - 2019 votes
No, I don't think they need it
36% - 2828 votes
Previous Results
Podcasts
PODCAST | MISSING MATTHEW EPISODE 3: Decades of false starts add to a family's despair