Don't let the fools get to you, Bra Terror 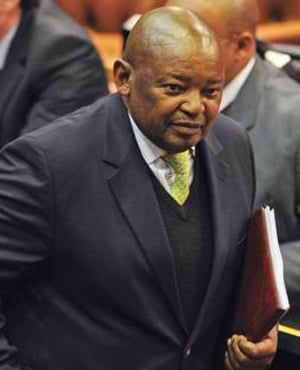 I was angry and ashamed yesterday, and deeply saddened, at the way most members of Parliament acted like a lynch mob and humiliated a dignified man with a proud record of struggle and sacrifice, Mosiuoa Lekota.

I was disgusted at the way so many johnny-come-latelies and people who until a few months ago prayed at the altar of Jacob Zuma and the Guptas jeered one of the few honourable people in Parliament who had the guts to ask uncomfortable but important questions on the critical issue of land redistribution.

Mosioua Patrick "Terror" Lekota is a dyed-in-the-wool democrat, a true patriot with cleaner hands than probably all those who had tried to belittle him yesterday.

I have to disclose that Lekota and I both hail from Kroonstad in the Free State and that we have been friends for more than three decades. He was a source of strength when a few colleagues and I started the newspaper Vrye Weekblad in the dangerous late 1980s with the express purpose of exposing the evils of apartheid and letting the voice of the oppressed, jailed and banned be heard in the Afrikaans language.

I always felt inspired after one of his visits to our run-down offices in the Market Theatre district of Johannesburg. He always had a smile and a joke and lots of encouragement. On occasion he even lobbied for us with foreign embassies when the apartheid state threatened to destroy us.

We have had long conversations about our shared love of the land and about the history of the Free State and Lesotho, and we both had a special appreciation of the legendary founder-king of the Basotho, Morena Moshoeshoe I, about whom I have written much and made a full-length documentary film.

Terror, as I still call him, is three years older than me and grew up in the "lokasie" of our Free State town, while I grew up comfortably in white, middle class, small-town suburbia. He was a Black Consciousness disciple as a student revolutionary at the University of the North and SASO organiser, activities that saw him sent off to Robben Island for ten years.

Under the influence of the grand old men of the island of those years, Nelson Mandela and Walter Sisulu, he gradually turned to embrace non-racialism as preached by the Freedom Charter. Terror became the embodiment of non-racialism, just like his mentors Mandela, Sisulu and Ahmed Kathrada.

(He published a moving book of letters to his daughter Masetjhaba, called Prison Letters to a Daughter that you should get hold of and read.)

After his release, I encountered Terror as a co-founder and first publicity secretary of the United Democratic Front, the only movement I ever saw as my political home – the movement that should take most of the credit for forcing the apartheid regime to the negotiating table.

Terror was again detained in 1984. I saw him go through the infamous Delmas Treason Trial and packed off to jail once again for twelve years, to be released in 1989 when a court reduced the sentence. It is well known that he was later Free State premier (and gave the provincial rugby team regular pep talks), a Cabinet minister and chair of the ANC for a decade – in fact, he won this position against Steve Tshwete, the man who had originally recruited him into the ANC.

In the early 2000s Lekota angered his president, Thabo Mbeki, when he fiercely opposed Mbeki’s quiet diplomacy towards Zimbabwe. We now know how wrong that Mbeki strategy was. Terror was never one to shy away from difficult issues, even when it threatened his political career.

He left the ANC to form Cope when Mbeki was toppled and he couldn’t stand to serve under Zuma – now nobody in Parliament wants to own up to worshipping Zuma.

Back to yesterday’s lynch mob in Parliament.

Terror, I know, is a man of the soil. He was born on a farm in the Senekal district and was looked after by his uncle while his parents worked in Johannesburg. They took him with them when they moved to Kroonstad when he was ten years old. I remember how proud Terror was when he could afford to buy his own piece of land in the Free State.

I know Terror is keen to see black farmers getting established on the land and historical wrongs be corrected as a matter of urgency. But to him this is not a cheap populist slogan; it’s a complex and sensitive, potentially even explosive issue.

Hence his direct questions, which had the EFF and many ANC members howling and insulting him: Who will you take the land from – from the great-grandchildren of slaves and of indentured Indian labourers? From the descendants of French Huguenots who came to Africa in the 17th century fleeing religious prosecution? Whose properties will be taken without compensation, and who will you give it to? Who is "our people" and who is not? Will you tear up the Bill of Rights in the Constitution?

He threw in another question few had considered: Will you return half of the Free State to Lesotho? Moshoeshoe had jurisdiction over most of that province before the British signed it away to the Republic of the Orange Free State.

Similar questions should be asked about areas adjacent to Botswana, Swaziland and Mozambique, all countries whose borders had been drawn by British colonialists with people of the same ethnic and linguistic origin living on both sides of the borders.

Terror could also have asked a few poignant questions about what the plans were for the land, a significant part of South Africa’s surface area, first occupied by our country’s First Peoples, the Khoikhoi and the San.

The EFF’s Mbuyiseni Ndlozi was suddenly overcome by student-like revolutionary fervour and asked Lekota on a point of order whether he was "paid by fascists of the nationalist party" to question land expropriation. On the day Ndlozi was born in 1985, Lekota was languishing in an apartheid jail for fighting for what the young man is now enjoying.

Terror knew very well that he was going to be vilified. It didn’t stop him. It happened a few months ago on a radio talk show when he raised these same questions and the young city slicker presenter tried to make fun of him, depicting him as some Uncle Tom fool. My blood boiled.

As President Cyril Ramaphosa sat listening to Terror, he must have known that he would at some point have to answer these questions. For now, partly because he’s trying to keep his divided party together and partly because he’s already in election mode for 2019, Ramaphosa will mouth the words "expropriation without compensation", but he knows very well that it’s far from that simple; that if it’s done recklessly, it will most certainly destroy the economy and social cohesion; that it cannot be done in a way that destroys all rights to private property ownership.

Terror has also read Kgalema Motlanthe’s ANC-appointed Report of the High Level Panel issued three months ago that explains that the problem with slow land reform wasn’t the Constitution, but the state’s incapacities and mismanagement.

The loudmouths and opportunists who shouted him down, should ponder Terror’s questions, unless they believe in a chaotic Zimbabwe-style land redistribution where many politically connected people were simply given successful commercial farms as status symbols and weekend getaways – a move that helped Zimbabweans go from the wealthiest Africans thirty years ago to the second-poorest.

The land issue is a critically important one with deep symbolic and historic implications, not one to be trivialised by cheap populists or urbanites using it as a slogan to pose as revolutionaries.

Before we allow land to be expropriated without compensation, we should establish the history of land possession and occupation through the last four hundred years. We should carefully consider what land we need to identify for redistribution and who should be given that land.

And while we’re doing that, we as a people should put pressure on government to radically speed up real land reform in a sustained manner and convince organised agriculture that it is in its own interest to increase its contribution to this process.

Sit back and breathe, Bra Terror. Don’t let these fools get to you.

We live in a world where facts and fiction get blurred
In times of uncertainty you need journalism you can trust. For only R75 per month, you have access to a world of in-depth analyses, investigative journalism, top opinions and a range of features. Journalism strengthens democracy. Invest in the future today.
Subscribe to News24
Related Links
Zuma's defiant exit signifies end to SA's 9 darkest years since '94
ANN7 does not deserve our activism
Short-termist ANC, arrogant DA to blame for water crisis
Next on News24
Unsure who to vote for? These are your options

3 players win R109k in the Daily Lotto prize
Full list of lottery results
Lockdown For
DAYS
HRS
MINS
Voting Booth
Who do you think is going to win the 2020 US election?
Please select an option Oops! Something went wrong, please try again later.
Biden is going to take it
46% - 7333 votes
It's four more years for Trump
54% - 8455 votes
Previous Results
Podcasts
PODCAST | POLITICS UNMUTED: Money for nothing, but how do we correct the corruption ship?