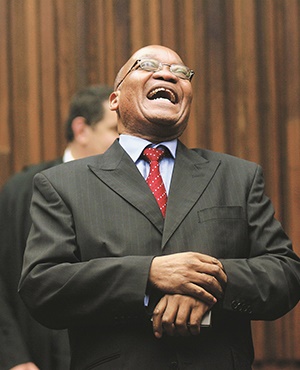 It is entirely appropriate that Jacob Zuma didn’t leave office in a dignified way, in a way that is in the interest of his party and the country.

It defines his nine years in office: arrogant, defiant, destructive, giving the democratic process the middle finger, only serving his own interests.

As I write this, the news is that the ANC’s NEC sat for thirteen hours and eventually determined that he be asked to resign. He refused, wanting three more months in office.

We will know after noon today whether he will be removed by Parliament after a motion of no confidence and if so, when this will happen.

At least if a motion of no confidence is passed, the whole Cabinet gets dismissed and Cyril Ramaphosa could appoint a new one without having to fire the Zuma loyalists and Gupta proxies like Des van Rooyen, Bathabile Dlamini, Faith Muthambi, Mosebenzi Zwane and David Mahlobo.

Zuma actually deserves to be impeached, causing him to lose all his generous benefits and security, but we have a budget speech next week and many other urgent matters – we can’t wait for that process.

Zuma’s demise will be an end to the darkest chapter in South Africa’s history since we became a democracy in 1994.

Now we understand a little better why Ramaphosa was being so cautious the last few weeks in his efforts to get Zuma to leave office.

It also tells us that Ramaphosa is going to find it a tough job, an almost impossible job, to lead the ANC if he wants to be true to his mission of change, renewal and growth.

The fact that it took so many hours of deliberation by the ANC to get to a decision to order Zuma to depart tells us that there must have been strong support for Zuma staying on in the ANC’s top decision making body.

Who are these people? What could their motivation be? Tribalism? Greed? Fear of getting their dirty past exposed? A desire for what Gwede Mantashe called "exit looting"?

Some of them say in public that they’re standing with Zuma because only he will make sure radical economic transformation will happen.

We know that they know that they are lying. After all the scandals at the state-owned enterprises and all the hundreds of billions of rands stolen and wasted, everybody knows the Zuma version of RET was indeed radical economic looting; stealing from the poor.

Zuma ripped through the fabric of our society and compromised many important state institutions.

He outsourced the political power we, the people, entrusted him with to an immigrant family in exhange for favours and money. He allowed this family to insult us and subvert our sovereignty and national pride.

He undermined our judicial system and repeatedly violated his oath of office and our Constitution.

He blatantly lied to Parliament on several occasions.

He destroyed many of the hard-won gains our society had made between 1994 and 2009.

He sat on a throne like a feared king, dishing out and receiving favours and gifts.

He did serious damage to our economy and singlehandedly caused a credit downgrade.

His personal life is a mess and he embarrassed his country in the eyes of the African continent and the world.

He ruled by fear and division.

He was driven by greed, lust for power and paranoia about ending up in jail.

During his nine years in power, money meant for development and alleviating the plight of the poor were brazenly stolen by his inner circle and business buddies.

He brought back something the ANC had successfully fought against for a century: tribalism and ethnic chauvinism.

And when it was his time to go, he threatened and mobilised and played dangerous games.

We must take the names down of those in positions of power who still supported him after it became clear that the broader ANC and the public wanted the new ANC president to take over the leadership of the country.

I have come across several long-time ANC supporters who refused to vote for the ANC at the last election. They told me they’re ready to return to the fold because under Cyril Ramaphosa the honour of the ANC will be restored.

But will it? What does it say about the ANC if so many in positions of power still cling to this corrupt man who had done South Africa such unspeakable harm?

I have been very upbeat about what Ramaphosa could achieve as the new ANC leader, but I clearly underestimated how many senior ANC leaders stubbornly side with Zuma.

A mere week ago I still believed that the change in leadership could make it possible for the ANC to rejuvenate and even become a modern political party instead of a tired former liberation movement. Now I’m not so sure.

Perhaps this morning’s pessimism will lift once Ramaphosa has established himself in Tuynhuys.

But the much-expected Cyril Spring has started on a very chilly note.

* The original headline of this article as written by News24 was changed after publication as it did not accurately reflect the content of the author's column.

We live in a world where facts and fiction get blurred
In times of uncertainty you need journalism you can trust. For only R75 per month, you have access to a world of in-depth analyses, investigative journalism, top opinions and a range of features. Journalism strengthens democracy. Invest in the future today.
Subscribe to News24
Related Links
ANN7 does not deserve our activism
Short-termist ANC, arrogant DA to blame for water crisis
'Cyril Spark' may not let us drop our guard
Next on News24
Unsure who to vote for? These are your options