The vote of no confidence is Mbete's big moment, but will she pass the test? 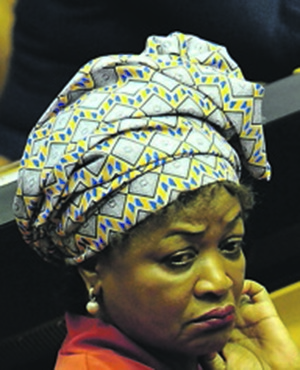 The much-anticipated vote of no confidence in President Jacob Zuma is now less than two weeks away. All eyes are on Speaker Baleka Mbete, who has to decide on whether the vote will be in secret or not.

So this is Mbete’s big moment – not only in terms of what could potentially happen on the day, but also because of the precedent it sets for the future. The stakes are high, not only for the country, but also for her. Mbete announced recently that she will stand for the position of president of the ANC and thus, also of the country in 2019.

Last year, there was talk of a bid from her side, but then she seemed to have second thoughts. This all changed recently. Apparently she was convinced by some in the Premier League, who are not happy with Nkosazana Dlamini-Zuma, to re-enter the race. Whether she will succeed or fail will of course depend on the degree of support she can secure from the Premier League and KZN branches in the next few months, and that support will not come without help from President Zuma.

In order to ensure the backing from that faction in the ANC, she has to avoid any move that would show her as weak or that damages the image and already fragile standing of the ANC. That would be fatal for her bid for the presidency.

So when deciding on the nature of the ballot for the 8th of August, she will ultimately have her own future as well as that of the ANC at the forefront of her mind. The opinions of the opposition, the media and the general public will come second to her loyalty to the ANC and her personal aspirations.

It is therefore clear that Mbete will only allow a secret ballot if she is convinced that there will not be a large scale defiance of the NEC instruction by ANC MPs and that the motion will be defeated, even with a secret ballot.

So what are the chances of the motion passing in the case of a secret ballot? I have no doubt that if the vote had taken place shortly after the cabinet reshuffle in March, a large percentage of ANC MPs would have voted with the opposition and the motion would most likely have passed, thus getting rid of President Zuma.

However, the mood in Parliament has changed in the last four months. Those against Zuma seem to have battle fatigue. An increasing number of them also argue that, despite their conviction that Zuma should go, if it is achieved via such a motion, it will tear the party apart. Given that December is so close, they feel that it is better to wait till then.

They have also raised the uncertainty about who would succeed Zuma if such a motion were to pass – something I wrote about in April. Many from the pro-Zuma faction have made it clear that they will not support Cyril Ramaphosa in such a scenario. Thus it could be someone "worse" than even Jacob Zuma. And so many MPs argue: "Better the devil you know," for a few more months.

Apart from all the rational arguments, there is also a compelling emotional issue influencing ANC MPs. Many are simply terrified of defying the party. I have previously written about the paranoia of the president. This was confirmed during the policy conference with much time being spent on debating the idea of "Western inspired regime change".

But this paranoia extends beyond the president. Many ANC MPs are increasingly fearful and are paranoid that their phone calls and emails are being monitored. This makes any attempt to organise a large-scale revolt very difficult.

Many also don’t believe that a secret vote will truly be anonymous. The electronic voting machines in Parliament can’t accommodate a secret ballot. The vote will therefore have to be (as in the case of the vote for the speaker and president) on pieces of paper.

Many MPs have said to me that they are worried about small marks on the ballot paper that could identify them and/or that the cameras in Parliament and people in the gallery would be able to spot where they draw their crosses.

Of course it can be argued that they should have the strength of character to vote according to their conscience. But that is easier said than done. Even though it will be hard for the ANC to take disciplinary action against a large group of MPs, one only needs to follow what has happened to Makhosi Khoza in recent times to understand the enormous risk people take when stepping out of the ANC party line.

And it is not only a personal risk; it involves family and (shamefully) also children. I have absolutely no doubt that what is happening to Khoza is intended to scare the living daylights out of any other ANC MP who is thinking about defying the party.

And it is working.

Many of the most vocal anti-Zuma MPs are now talking of rather abstaining even in the case of a secret ballot. They argue that it will send a clear message of dissatisfaction and unhappiness, but with less risk for them personally as well as for the party.

Of course Mbete has to make her own calculations in this regard. One thing I know for sure is that she will not risk a secret ballot unless she is absolutely convinced that the motion will still be defeated. Of course some members of the opposition (the DA does not want a secret ballot) have said that they will take the matter back to the courts if she does not rule in favour of a secret ballot.

I don’t think that this will be of grave concern to Mbete – even if she loses at the end. Now more than ever, her primary concern is her image within the ANC and as far as the majority of ANC members are concerned, another court case will only demonstrate her willingness to defend the party.

In any case, any delay in terms of the vote works in her and the pro-Zuma faction’s favour, since the closer it gets to the December conference, the less likely anyone in the ANC will be to vote for the motion.

Of course, in a democratic Parliament, the Speaker is supposed to rise above party loyalties and rule the House with only the interests of the people in mind. However, in this matter, that is the only thing we can be sure won't happen.

We live in a world where facts and fiction get blurred
In times of uncertainty you need journalism you can trust. For only R75 per month, you have access to a world of in-depth analyses, investigative journalism, top opinions and a range of features. Journalism strengthens democracy. Invest in the future today.
Subscribe to News24
Related Links
Is a new Ramaphosa-led party our last hope?
Two deputy presidents: what is Zuma really plotting?
What Zuma fears most
Next on News24
Melanie Verwoerd | Is it just me or are things feeling particularly difficult at the moment?