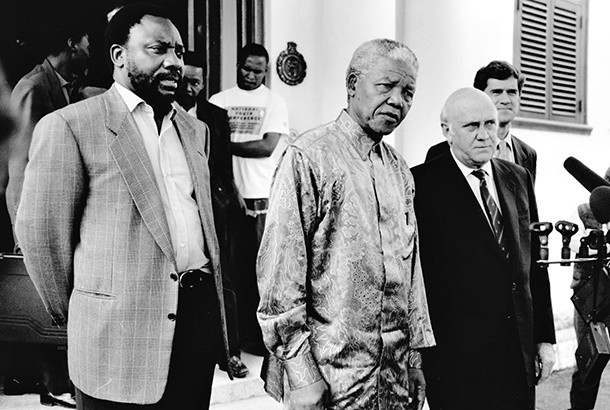 Then ANC secretary general Cyril Ramaphosa, former president Nelson Mandela, and then deputy president FW de Klerk speak to the press after their meeting on the issue of the Constitution on April 28, 1996. (Photo by Gallo Images / Business Day / Robert Botha)

FW de Klerk didn't strike many observers, inside the National Party caucus or outside, as a reformer. By the time he won the party leadership by a narrow margin of eight votes, he was widely considered to be a conservative, even an ultra-conservative.

According to various accounts, biographies and testimonies, he never strayed from the party line and was one of the most effective proponents of apartheid policy while Cabinet minister in the governments of John Vorster and PW Botha, both regarded as rigid and hard line, and while he was leader of the National Party in the erstwhile Transvaal.

De Klerk, who represented the constituency of Vereeniging in the Southern Transvaal, was leader of white affairs in the tricameral parliament and the enlightened wing of the party, that included his vanquished opponent for the party leadership, then finance minister Barend du Plessis, and perennial favourite Pik Botha, who was minister of foreign affairs, weren't convinced that he was the right man to lead the country out of the political dead-end it found itself in when PW Botha resigned in anger in 1989.

The successive states of emergency – enforced to try and quell unruly black townships – coupled with sanctions, economic woes and international pressure, had forced the National Party Government into a corner from which it seemingly could not escape. The intransigent Botha, who ironically did more than most to move away from hard apartheid, just wasn't prepared to make the great leap forward.

De Klerk, however, surprised many – including his own caucus – by doing exactly that on February 2, 1990, exactly 30 years ago. Today, South Africa is a democracy, with rights-based guarantees, but with social and economic problems as serious, if not worse, than when De Klerk was president.

Cyril Ramaphosa, head of state since February 2018, has been unable to push through the necessary reforms and faces a range of deep and structural problems.

Here are five lessons he can learn from De Klerk.

De Klerk was a strategic and pragmatic politician, not prone to making emotional decisions. He knew that apartheid South Africa was coming very close to the end of its lifespan and that if he wanted to ensure concessions from the ANC, he had to be able to do that from a position of strength. When the Berlin Wall fell in 1989, along with a series of governments in the Eastern Bloc, he knew it was a matter of time before the Soviet Union fell, and with that the ANC's biggest support base. De Klerk recognised the moment to move forward.

Similarly, Ramaphosa must realise that the dire state of governance and his government's fiscal situation presents an opportunity to move on wide-ranging reforms. The reforms Ramaphosa must implement – including the wholesale and fundamental overhaul of state companies and a dramatic downsizing (and professionalising) of the civil service - would be political suicide in normal times. But, like De Klerk, Ramaphosa needs to be bold, otherwise the whole country could go down.

2. Go further than anyone expects

Although some measure of reform was expected before De Klerk's February 2 speech, the extent of his mooted revolution was unclear until the moment he announced it. And he went further than many hardliners expected, which made it almost impossible to stop the process once it started. By choosing to make the announcement on the platform he did, he bound his government and the state to his plans – and ensured that his opponents were caught flat-footed.

Ramaphosa is an incrementalist. He prefers to slowly and cautiously creep forward. However, the reality of the situation in which he finds himself means that often he gives one step forward while being pushed back two. Events often overtake the president's strategy – SAA's financial crises amid Eskom's implosion is a case in point. Ramaphosa must make bold and public announcements and follow through with it. That's the only way the country will progress.

De Klerk was the ultimate party man. The son of a senator and Cabinet minister, a member of the executives of John Vorster and PW Botha, he was a staunch believer in party dogma and policies, and worked hard to implement it. He was so effective and such an adherent, that he was considered an ultra-conservative. But when push came to shove, De Klerk managed to look beyond his party's central ideological tenets and helped forge a new path.

In that respect Ramaphosa seems to be cut from the same cloth as De Klerk, with party philosophy and convictions the one and only lodestar. Nothing is seemingly able to force the president to deviate from party decisions, even if the damage it is causing is blindingly obvious. Like De Klerk was able to do, Ramaphosa must realise he governs on behalf of all, not only a tiny minority in a darkened caucus room.

When De Klerk announced the unbanning of the ANC and other organisations and the release of Nelson Mandela from prison, it caught both the ANC and Mandela unprepared. The ANC was very successful in claiming the moral high ground against a racist, violent and deaf apartheid regime who refused to negotiate. But De Klerk plucked the rug out from under the party and immediately took the initiative with his address. Thabo Mbeki acknowledged as much when he said Mandela in prison was the party's greatest mobilisation tool.

Ramaphosa has many opponents, with those in his own party the most dangerous. There is a movement coalescing around the party's secretary general Ace Magashule at the ANC's head office in downtown Johannesburg, which could leave the president short of allies when the crunch comes. He must use the powerful office of president to force reforms which not only puts his opponents on the back foot, but takes the country forward. "Policies must produce results and progress, otherwise it must be discarded," De Klerk said. Ramapohosa should take heed.

5. Don't back off and don't buckle

International reaction might have been favourable and the ANC might have welcomed De Klerk's speech, but the National Party's most strident opponents, the Conservative Party (CP), was breathing fire. CP leader Andries Treurnicht said all De Klerk did "was to awaken the tiger in the Afrikaner", while calls for a general election, which would have threatened De Klerk's leadership, were made. But he stayed the course and never folded under pressure.

Ramaphosa has in recent times come in for stinging criticism over the actions and statements of his two key lieutenants, Tito Mboweni (finance) and Pravin Gordhan (public enterprises). They hold the key to economic recovery and pushing back capture and corruption. The president is under enormous pressure, both from within and from outside the party, to dismiss them. If he is serious about reforms he should continue to back them, in private but, importantly, in public too.

We live in a world where facts and fiction get blurred
In times of uncertainty you need journalism you can trust. For 14 free days, you can have access to a world of in-depth analyses, investigative journalism, top opinions and a range of features. Journalism strengthens democracy. Invest in the future today. Thereafter you will be billed R75 per month. You can cancel anytime and if you cancel within 14 days you won't be billed.
Subscribe to News24
Related Links
ANALYSIS | The fightback: Ramaphosa’s enemies within the ANC
Next on News24
Pieter du Toit | Mantashe - Zuma man, Bosasa beneficiary, and ANC enforcer but not a Cabinet minister