Conspicuously absent in the Paris Climate Accord is any mention of human overpopulation.

Surely the time has come for humanity to openly acknowledge that environmental decline is linked directly to our species' unrelenting proliferation around the world.

Understandably, the subject of human population growth is highly contentious but, considering our civilisation could face unfathomable hardship or even extinction by the end of this century, it’s a subject we’re going to have to confront – sooner rather than later.

It is estimated that in 50 000 BC the population of Homo Sapiens was around 44 000 individuals. By 1 AD it had risen to approximately 200 million. From there it grew steadily up until the beginning of the industrial revolution, after which our population rocketed from 1 billion in 1800 to 7.5 billion in 2018.

The exponential human population growth curve shown below resembles that of a cryptocurrency, although our curve isn’t expected to level off or tumble any time soon – not through voluntary means anyway. To fully appreciate the sheer magnitude of our human population, we need to compare it with the populations of other terrestrial megafauna (land mammals exceeding 40kg in mass).

For illustrative purposes, equate the human population of 7,5 billion to the height of the Himalayan Annapurna III peak – 7 500 metres. Then, consider the population sizes of other megafauna: Now, consider the fact that just 250 years ago, most wild megafauna species still numbered in their tens, if not hundreds of millions around the world – even large ones. For instance, estimates put the African elephant and rhino populations at 30 million each, and the American bison population at 60 million prior to mankind’s prolific rise.

Simply put, since the start of the industrial revolution, soaring human and livestock populations have displaced almost all the world’s wild megafauna to the point of being classified as either vulnerable, endangered or even extinct.

Our civilisation’s unremitting seizure of wilderness area for urban expansion, development, transport infrastructure, pastureland and agriculture, has left nothing but fragmented enclaves for all the world’s remaining megafauna to exist.

And it isn’t just wild megafauna that’s been affected by this displacement phenomenon. It extends right across the full spectrum of our planet’s plant and animal kingdoms, including those in our oceans.

This fundamentally contradicts the notion put forward by leading environmental agencies that clean energy, reduced consumption and technology alone can lead to a long term sustainable future for other megafauna species.

The sad truth is, there’s almost no space left on Earth for wild megafauna to regain even a fraction of their original numbers … certainly not while our population continues to grow, and our agricultural footprint continues to spread.

The bulk of this population growth is set to take place in developing nations as shown in the following BBC world population graph: The combined population of developing nations is projected to rise from 6 billion today, to 8 billion in 2050, and then to over 9 billion by 2100 (assuming the medium fertility rate used by the UN). With so many of Africa’s rainforests, savannahs, lakes and megafauna species already threatened across the continent, one has to ask how they will survive the doubling of the human population over the next 32 years … and then the almost doubling again over the 50 years that follow after. There’s no doubt that the roll-out of renewable energy and carbon-neutral technologies will have an impact, but to believe that they alone will be sufficient to meet the highly optimistic CO2 emission reduction targets recommended in the Paris Accord is simply reckless.

The following graph published by The Guardian emphasises just how drastic the CO2 emission cuts need to be to give our civilisation a 50% chance of not exceeding the critical 2 degrees Celcius global average temperature increase limit, beyond which lurks an unknown degree of climate anarchy and environmental catastrophe. 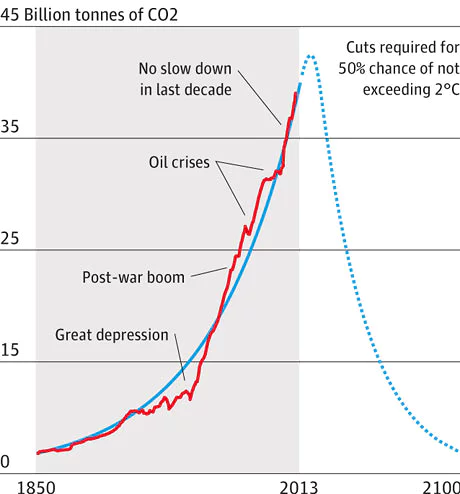 Consider that by 2100, annual carbon emissions will need to be reduced to a level last seen in 1850 … with a consumer-driven human population between 6 and 15 times larger than it was in 1850.

The unfortunate reality is that unchecked population growth will undermine even the most sincere and radical efforts of nations to achieve the Paris Accord’s CO2 emission cut recommendations.

If the size of our human population hasn’t quite sunk in yet, consider that there are approximately seven billion rats living on Earth. Human beings now outnumber rats by half-a-billion. (Spare a thought for the three Northern White Rhino left on Earth…)

If we’re not prepared to draw the population plateau somewhere, our species will continue to proliferate until such time as we experience an involuntary and unprecedented population correction – most likely caused by mass-starvation resulting from climate change-induced environmental collapse.

Time is of the essence for the human race to acknowledge the seriousness of the fast-approaching apocalyptic fate that awaits every single one of us. Thus, we must not hesitate to initiate the conversation regarding the stabilisation and gradual reduction of the human population to a point where it harmonises with the sustainable carrying capacity of our planet.

Only through constructive dialogue can we devise innovative and socially acceptable ways to minimise population growth, by encouraging a global movement towards smaller families and reducing the incidence of unplanned pregnancies.

Next week: Environmental decline in perspective.

- Robert J. Traydon is a BSc graduate of Engineering and the author of Wake-up Call: 2035. He’s travelled to over 40 countries across six continents and worked in various business spheres. His articles explore a wide range of controversial and current affairs from a contrarian perspective.

We live in a world where facts and fiction get blurred
In times of uncertainty you need journalism you can trust. For 14 free days, you can have access to a world of in-depth analyses, investigative journalism, top opinions and a range of features. Journalism strengthens democracy. Invest in the future today. Thereafter you will be billed R75 per month. You can cancel anytime and if you cancel within 14 days you won't be billed.
Subscribe to News24
Related Links
Wake-up call #1: Will mankind be extinct by 2100?
Next on News24
Wake-up call #1: Will mankind be extinct by 2100?