#Wake-up call 7: Why nuclear weapons are no less barbaric than chemical weapons

The recent chemical attack in Syria was well-deserving of the international condemnation it received.

The attack was referred to as "shocking and barbaric" by UK Prime Minister Theresa May, while United States President Donald Trump referred to Syrian President Bashar al-Assad, as a "monster" and a "gas killing animal".

Their statements underscore the world's zero-tolerance approach to chemical weapons of mass destruction (WMD). Perplexing, however, is that both these leaders still tolerate the existence of an even more shocking and barbaric WMD – the nuclear weapon.

Only nine of the world's 196 nations insist on being nuclear armed. Between them, they possess an estimated 9 220 nuclear weapons with a combined explosive yield exceeding 7 000 megatons.

To put this yield in perspective, the Krakatoa volcanic eruption of 1883 was roughly 200 megatons, suggesting that these nine nations possess the equivalent explosive power of 35 Krakatoa volcanoes – all capable of spewing out radioactive ash.

The breakdown of nuclear arsenals across these nations is shown in the following graph (figures obtained from the Bulletin of Atomic Scientists). 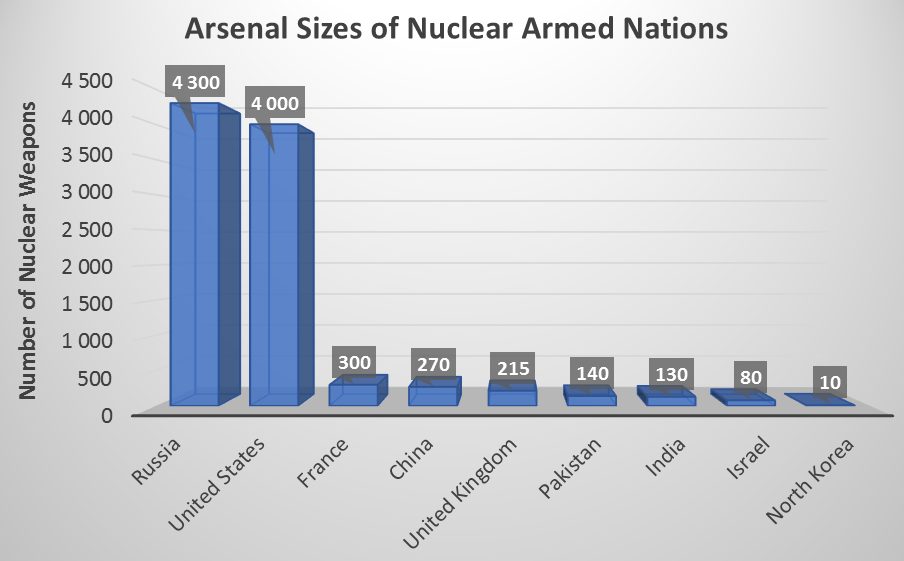 Immediately apparent is that 90% of the world's nuclear weapons belong to just two nations: Russia and the US. This extraordinary disproportion persists as a legacy of the Cold War, during which the global nuclear arsenal peaked at over 64 000 in 1986.

Unfortunately, the commendable arms reduction efforts over the last three decades have ground to a sudden halt due to waning political will and rising tensions between various nuclear armed nations.

In fact, in violation of Article VI of the Nuclear Non-Proliferation Treaty which compels nuclear nations to pursue negotiations for nuclear disarmament, the leaders of these nations seem intent on both modernising and expanding their existing nuclear arsenals rather than reducing them.

It is unthinkable that the fate of the entire world hangs on the continuation of peace between these nuclear armed nations.

It is widely known that a full-scale nuclear war would trigger a hypothetical nuclear winter, which is similar in effect to a volcanic winter.

This phenomenon involves the saturation of Earth's atmosphere with radioactive particulate matter dispersed by numerous, large-scale nuclear detonations. This would block out sunlight causing global temperatures to plummet, killing all plant life that relies on photosynthesis, followed swiftly by the total collapse of Earth's biosphere.

Mankind would likely face extinction, as would most of the animal kingdom.

What is not so widely known, though, is that even a minor nuclear conflict – between India and Pakistan for instance – could have catastrophic consequences for the environment and humanity.

A report published in 2014 concluded that a nuclear exchange involving just 100 nuclear weapons (average yield of 15 kilotons), would launch five million tons of soot into the stratosphere precipitating a sudden drop in global temperatures that could last beyond 25 years.

Much of the ozone layer would also be lost, exposing Earth's surface to UV radiation increases of up to 80%. The combined effect of cooling and enhanced UV would likely damage both land and ocean-based ecosystems, slash global food production and trigger a global nuclear famine.

The report's lead author, Michael Mills, commented that "in the 1980s, we learned that global thermonuclear war could render the planet close to uninhabitable. Now, we know that even [regional] nuclear war can cause great suffering worldwide, with potential for a lot of people to die from starvation in regions very far from a conflict".

Both conventions are multilateral disarmament treaties prohibiting the development, production, stockpiling, transfer and use of these WMDs respectively.

The following treaties apply to nuclear WMDs: the Nuclear Non-proliferation Treaty (NPT) entered into force in 1970; and the Nuclear Weapon Ban Treaty sealed in 2017 – signed by 58 nations but not yet in force.

For almost 50 years, the NPT has served its purpose in curtailing proliferation and reducing arsenal sizes of nuclear weapons, but the time has come for all nations to adopt the more rational and democratic Nuclear Weapon Ban Treaty.

The logic is simple:

- The Nuclear Weapon Ban Treaty is consistent with its Chemical/Biological Weapon Convention counterparts;

- While the NPT exerts archaic discrimination in permitting some seemingly superior nations to possess nuclear weapons whereas others may not, the Nuclear Weapon Ban Treaty exerts no such discrimination – the treaty applies equally to all nations. A mushroom-shaped cloud and water column from the underwater Baker nuclear explosion of July 25, 1946. A joint U.S Army-Navy task force staged two atomic weapons tests at Bikini atoll in the Marshall Islands, the first atomic explosions since the bombings of Japan in August 1945. (Photo: Wikipedia)

The stubborn insistence of nuclear armed nations to possess nuclear weapons, in the full knowledge that they can destroy not only mankind but also 12 million other innocent species, epitomises our civilisation's lost sense of morality.

It is deplorable that military strategists regard 3,8 billion years of evolution on Earth as mere collateral damage in the event of nuclear war.

In truth, all WMDs are shocking and barbaric and none should exist at all. If nations insist on perpetuating the principles of mutually assured destruction and deterrence, then they should do so using conventional weapons.

- Robert J. Traydon is a BSc graduate of Engineering and the author of 'Wake-up Call: 2035'. He's travelled to over 40 countries across six continents and worked in various business spheres. His articles explore a wide range of controversial and current affairs from a contrarian perspective.

We live in a world where facts and fiction get blurred
In times of uncertainty you need journalism you can trust. For only R75 per month, you have access to a world of in-depth analyses, investigative journalism, top opinions and a range of features. Journalism strengthens democracy. Invest in the future today.
Subscribe to News24
Related Links
Will humans' superiority be our downfall?
Wake-up Call #5: Will education and technology save us from an ecological apocalypse?
Wake-up Call #4: The myth that humans can mass-colonise another planet
Next on News24
Wake-up call #6: Will humans' superiority be our downfall?

Lucky Sunday for 3 Daily Lotto players
Full list of lottery results
Lockdown For
DAYS
HRS
MINS
Voting Booth
Children between 12 and 17 can now be vaccinated against Covid-19. As a parent I am:
Please select an option Oops! Something went wrong, please try again later.
Relieved, it's been a long wait to this point
51% - 2763 votes
A bit hesitant, and will wait to see how it goes
21% - 1146 votes
Completely against my child getting the shot
29% - 1562 votes
Previous Results
Podcasts
PODCAST | My Only Story: Fiddling, sex jokes and flirting – another water polo coach exposed