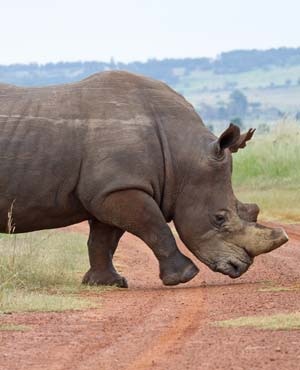 The act has been called a brazen assault on the rhino population according to a report by the Witness.

The three female rhino were darted and their horns were cut off.

Authorities said that the poachers managed to escape without being detected.

According to Divan Vermaak, the head of the Tala reserve, one of the females was found alive and a vet was able to save the animal by providing her with an antidote.

She was then released back into the reserve where she is being monitored, and may still receive more attention.

The attack apparently happened just 2km from the main entrance of the park and was within view from the gate.

The carcasses were found bloated and just a few metres from the attack area.

The horns were removed with precision, indicating that the poachers were experienced according to authorities.

It is believed that the rhino were darted with a veterinary drug called M99.

The drug consists mainly of a narcotic called Etorphine, known as a heavy muscle relaxant.

The drug also reduces one’s respiratory functions, so if a animal is given the too much of the drug or falls incorrectly they are more likely to die from suffocation.

The drug has been used in a number of poaching incidents especially in Natal and was responsible for the death of 8 rhino at the Weenen Game Reserve in 2013.

So far 43 rhino have been poached in the province this year.

According to Derek Grose, Tala’s new manager security will be increased drastically following the incident.

Grose noted that staff members were devastated by the attack and the effect it will have of the reserve, calling it a senseless killing.

A police investigation is currently underway.

We live in a world where facts and fiction get blurred
In times of uncertainty you need journalism you can trust. For only R75 per month, you have access to a world of in-depth analyses, investigative journalism, top opinions and a range of features. Journalism strengthens democracy. Invest in the future today.
Subscribe to News24
Related Links
Elephant, rhino poaching up in Namibia
Two rhino poachers killed
MTPA CEO suspended after 40 rhino horns stolen
Next on News24
Thousands of dead seal pups wash ashore in Namibia, says conservancy group