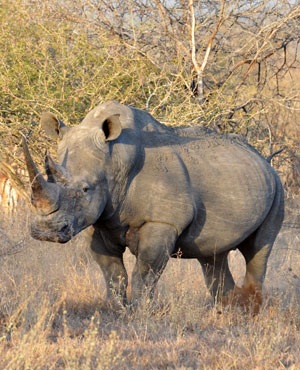 The six arrests, and the shooting of the two poachers happened in two separate operations, SANParks said in a statement.

"In the first operation, Crocodile Bridge rangers made contact with three suspected rhino poachers. In the ensuing pursuit, two were fatally wounded and the third managed to escape back into Mozambique."

A hunting rifle, ammunition, and other hunting equipment were recovered from the scene.

"In the second operation, six suspects were arrested by the SANParks Environmental Crime Investigative Unit, [supported by the] SA Police Service, in a follow-up operation outside the western boundary of the Kruger National Park (KNP)."

A hunting rifle, ammunition, and two cars were confiscated.

The arrests followed two weeks of successful operations, resulting in 35 alleged poachers being taken into custody, bringing the total arrested in the KNP for the month of October to a record 54.

The KNP had experienced an increase in armed incursions recently, resulting in 14 contacts between armed poaching gangs and joint forces consisting of SANParks rangers, police, and the SA National Defence Force.

"The latest arrests bring the total for the year within the KNP to 144. This is the highest number of suspected poachers arrested in the KNP to date," SANParks said.

SANParks acting chief executive Nomvuselelo Songelwa thanked those in the joint forces for the courage and tenacity they had shown in the fight to protect the Kruger's rhino population.

"We are very proud of them and their actions," Songelwa said.

"We are focused on winning this war at all costs and I can promise South Africans that we will leave nothing to chance in protecting our rhino in this iconic park and in our other national parks."

We live in a world where facts and fiction get blurred
In times of uncertainty you need journalism you can trust. For only R75 per month, you have access to a world of in-depth analyses, investigative journalism, top opinions and a range of features. Journalism strengthens democracy. Invest in the future today.
Subscribe to News24
Related Links
US charges South Africans in illegal rhino hunting case
Rangers strip down in raunchy calendar for SA's rhino!
Stolen R166m rhino horn case postponed
Next on News24
Thousands of dead seal pups wash ashore in Namibia, says conservancy group