Why Ace Magashule's arrest is a 'watershed moment' for the ANC Ace Magashule previously claimed that he was being followed.
News24

ANC secretary-general Ace Magashule's arrest for his role in a R255 million asbestos deal will test a national executive committee (NEC) resolution that those charged with corruption should step aside.

Already, Magashule's supporters are insisting that, despite the resolution, Magashule will remain in, arguably, the second most powerful position in the party.

Although Magashule and his supporters expected the Hawks to pounce, it appeared that they were caught unprepared on Tuesday when the news broke that a warrant for his arrest had been issued.

There’s more to this story
Subscribe to News24 and get access to our exclusive journalism and features today.
Subscribe
Already a subscriber? Sign in
Next on News24
De Ruyter: I have not experienced political interference at Eskom 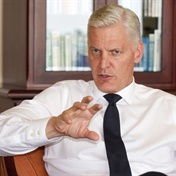