'No fool can tell me which lawyer must represent me': Malema on criticism of using white lawyers The story: EFF leader Julius Malema says he has been using Ian Levitt Attorneys for many years and that the EFF know which lawyer to use and where to use them.

Verbatim: "No fool can tell me which lawyer must represent me," he said outside the Randburg Magistrate's Court on Thursday as he charged back at criticism on social media that their legal representatives are white.

The background: Malema is on trial with MP Mbuyiseni Ndlozi for allegedly assaulting a police officer, Lieutenant-Colonel Johannes Jacobus Venter, at Fourways Memorial Cemetery during the funeral proceedings of struggle stalwart Winnie Madikizela-Mandela on 14 April 2018. Venter told the court that Malema said "no white man will stop me" as he tried explaining they were welcome to walk in the cemetery but their vehicle was not allowed in.

We live in a world where facts and fiction get blurred
In times of uncertainty you need journalism you can trust. For only R75 per month, you have access to a world of in-depth analyses, investigative journalism, top opinions and a range of features. Journalism strengthens democracy. Invest in the future today.
Subscribe to News24
Related Links
Malema, Ndlozi assault case: Lawyer says there are 'flaws in cop's statement'
'No white man will stop me' - cop tells court of day EFF leaders allegedly assaulted him
Land hearings: Malema concedes to EFF own goal in disrupting expropriation without compensation...
Next on News24
City of Johannesburg to act on those implicated in internal Covid-19 investigation report 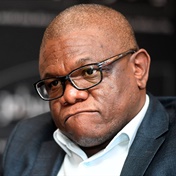