Silence in Johannesburg: 21 pics capturing how a virus forced a boisterous and brash city indoors

On Friday, Johannesburg, the city established along the main gold reef on the Witwatersrand, the city that built South Africa and the city that remains at the centre of commerce and industry, went silent.

Its inhabitants, from the far East Rand to Munsieville in the west, from the north in Midrand, to the south in Walkerville, mostly retreated indoors.

A city whose streets which on a normal Friday morning is clogged with transport and taxis and cars, its workers and businessmen jostling with each other on the sidewalks, its townshps heaving with factory foremen and miners running for trains and its green parks invaded by runners and dogs, mostly stayed out of sight.

Johannesburg, as The Star’s famous cartoonist Abe Berry wrote, "is an upstart of a city, like an arriviste pushing his way into society. It is brash with a certain agate edge of sophistication".

He quotes British journalist Malcolm Muggeridge who described the city as "a rough Babylon, prospering mightily".

When he arrived in Johannesburg Nelson Mandela was overwhelmed by Johannesburg's lights which seemed to stretch forever.

"I remembered the stories ... of buildings so tall you could not see the tops, of crowds of people speaking languages that you'd never heard of, of sleek motor cars and beautiful women and dashing gangsters. It was eGoli, the city of gold, where I would soon be making my home."

Johannesburg has always been, as Arthur Cartwright notes in his history of the city, The Corner House, "a dusty, dreary place".

On Friday it was silent and lonely.

Its broad streets largely empty and the spirit of a city emblematic of South Africa's history and its future, subdued. Driving along the empty and forlorn Klipspruit Valley Road in Soweto, with the iconic Orlando Stadium on the left, the first hint of the Highveld winter was visible. But there was no inkling of the normal traffic, one of the main access roads to Soweto. In Vilakazi Street, famously home to two Nobel Peace Prize winners - Mandela and Desmond Tutu - there was no one, beside one or two stragglers ambling aimlessly to the top of the street. The famous eateries and restaurants were shuttered, and parking for tourist buses were empty. 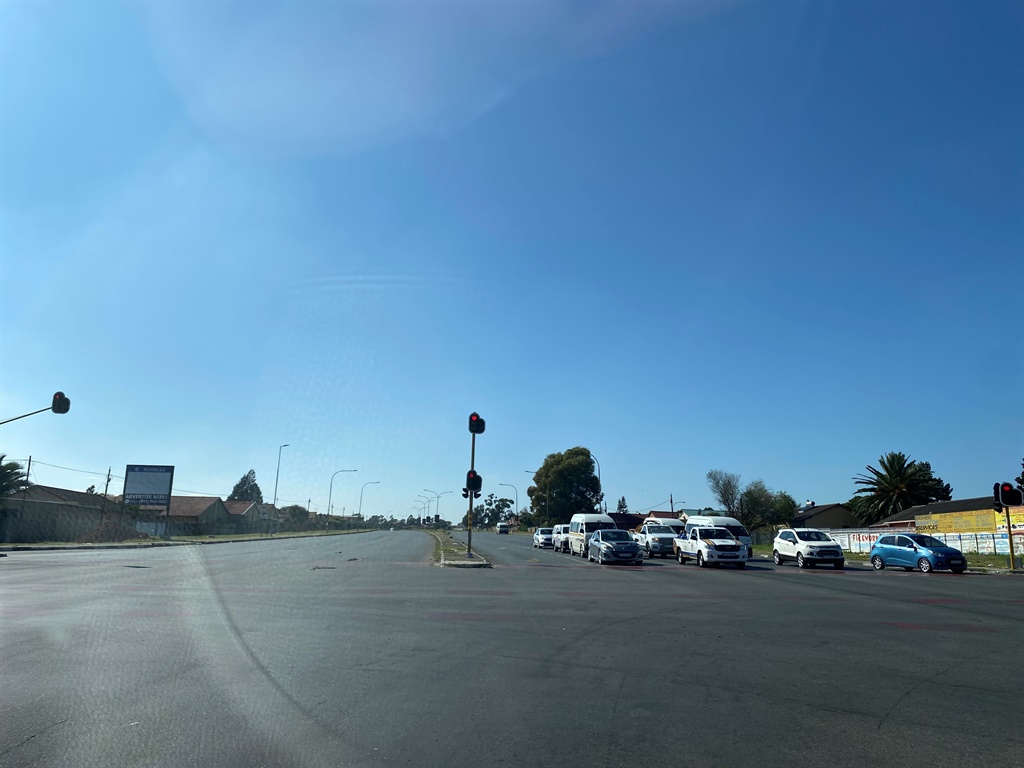 Main Reef Road, running alongside what was once the world’s richest gold deposits, was eerily quiet. It is one of Johannesburg’s main arteries, daily seeing the transport of thousands of workers, executives, domestic workers and miners to and from work. The train tracks underneath were deserted, as the train service has been suspended. Perth Road, at the Rahima Moosa Mother and Child Hospital on the way to and from Soweto, is chock-a-block at the best of times, with the Rea Vaya bus system in the middle of the road elbowing out taxis and cars. But on this Friday, shortly after 08:00, there was nothing. Burghersdorp, Newtown, one of the city’s olderst townships and once the site of furious diggings for gold, was deserted. Just off the famous Oriental Plaza, derelict buildings stand shoulder to shoulder with new developments, including apartment blocks and office space. If there were people, they were out of sight. Underneath the M1 (north) there was one homeless man sitting underneath a pillar. But besides the technicolour of the graffiti, it was quiet. Sipho Mtolo works for Pikitup, the City of Johannesburg’s cleaning company. He was cleaning streets near the Bree Street taxi rank, where some drivers were busy cleaning and washing their vehicles. Mtolo isn’t afraid of coronavirus, he said. The taxi rank was full of vehicles, but there weren’t any passengers to transport. Day one of the lockdown meant that there was no train service bringing in workers from the outskirts of the metropolis, or getting ready to take them home. From the Nelson Mandela Bridge towards Park Station, and in the other direction, towards Soweto, the West Rand and beyond, Shosholoza Meyl and Prasa commuter trains stood, impounded by fear and Covid-19. There wasn’t a sound on the bridge, nor any movement among the trains.

Underneath the M1 (north) there was one homeless man sitting underneath a pillar. But besides the technicolor of the graffiti, it was quiet. De Korte Street, Braamfontein. This street is normally one of the busiest streets in the city, with traffic to and from Park Station, to the bus depot where Zimbabweans embark on the long trek home and the street to the Queen Elizabeth Bridge all converge. On Friday morning there was no one. The Constitutional Court, the guarantor of our supreme law. On Friday, as always, it was open, filled with light and accessible. A man and his boy, exercising and playing atop the Florence apartment building in Hillbrow. An old field cannon on the ramparts of the Old Fort, on Constitution Hill, towards Johannesburg’s northern suburbs. Pretoria Street, Hillbrow, from the Old Fort towards the old Chelsea Hotel. Early morning in Hillbrow wasn’t as busy as usual, but people were on the street, going about their business, with car horns blowing and taxis skipping red lights. Day one of lockdown in Hillbrow didn’t look too different from a normal Saturday or Sunday morning. South Africa’s national flag, starting to stiffen in the early morning breeze, looking in a northerly direction from the Old Fort, where Nelson Mandela, Mohandas Ghandi and Christiaan de Wet were once held as prisoners. 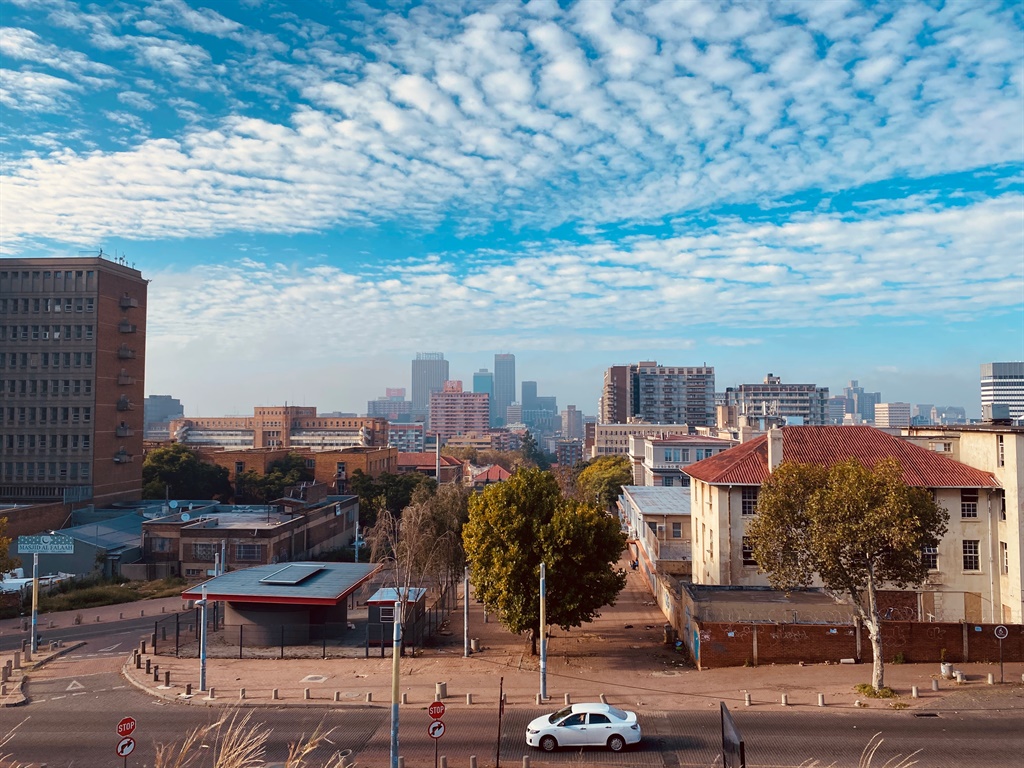 A lone car, with Johannesburg’s CBD in the distance, early on Friday. The police manned a roadblock on Kotze Street, Constitution Hill. "Have a good day, my dear," the female police member said after she waived me through. The Telkom Tower, an iconic Johannesburg landmark, and a deserted four-way stop at the foot of Constitution Hill early on Friday morning. Day one of the national lockdown, although warm, had hints of autumn about it. But very few people on the streets. Another main artery in Johannesburg: Barry Hertzog. It links north and south, the CBD with the leafy northern suburbs. In Friday morning there were no police or army on the streets, and it felt like a Sunday morning. Cars, delivery vehicles and some taxis.

We live in a world where facts and fiction get blurred
In times of uncertainty you need journalism you can trust. For 14 free days, you can have access to a world of in-depth analyses, investigative journalism, top opinions and a range of features. Journalism strengthens democracy. Invest in the future today. Thereafter you will be billed R75 per month. You can cancel anytime and if you cancel within 14 days you won't be billed.
Subscribe to News24
Related Links
Coronavirus: The first two deaths in SA - this is what we know so far
Wheels of justice: Johannesburg cyclist who defied lockdown arrested
OPINION: Maybe the coronavirus will set SA on a path to a more equitable education system
Next on News24
ANALYSIS | Inside SA’s first state capture trial: The players, the case and the consequences