IN FOCUS | AgriSA's Dan Kriek: 'We don't have time; we need results' 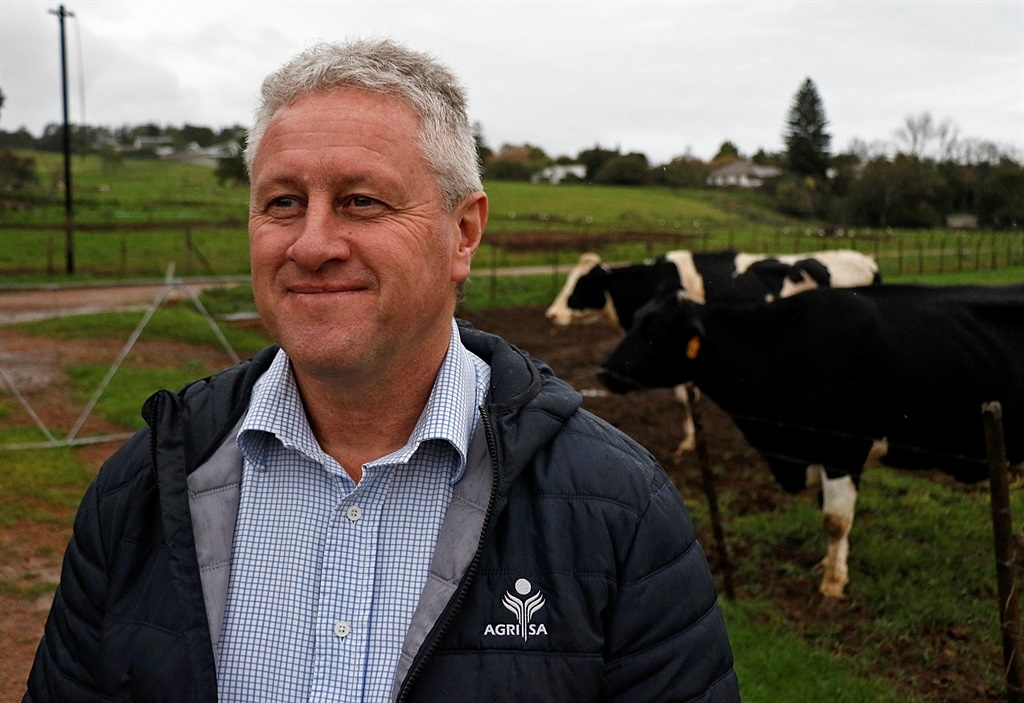 Dan Kriek, 49, is an extremely busy man. A farmer and president of AgriSA, the country's largest association of commercial farmers, he regularly shuttles between his cattle farm in the district of Tweeling in the north eastern Free State, and Pretoria, where AgriSA's head office is.

If he's not in Pretoria, he's visiting agriculture unions across the country, negotiating with sister organisations like the African Farmers' Association of South Africa (Afasa) or speaking to individual groups of farmers who are fearful about what the future holds.

His own enterprise, a commercial farm where he breeds South Devon cattle, now takes a backseat. But Kriek, a farmer of faith and family, is determined to ensure that organised agriculture will have a seat at the table when decisions about land reform, property ownership and the country's future are taken.

AgriSA has in recent weeks met President Cyril Ramaphosa as well as Deputy President David Mabuza and a delegation from the ANC, attempting to forge a relationship which will ensure that agriculture is taken seriously as a partner. Kriek also serves on a high-profile advisory panel appointed by Ramaphosa. He believes agriculture has a good future if South Africans can come together and once and for all sort out the debacle that land reform has become.

"My message to government and the president is clear: I don't agree with plans to amend the Constitution. Section 25 of the Constitution (the so-called property clause) is not the problem. They (the ANC) seem to be hell-bent to make changes to it, and they are going to have to realise that every action has a reaction, and investors will look at this and adjust their actions accordingly. I genuinely hope sanity prevails and that the Constitution is left alone. What we need is better cooperation, proper enabling legislation, institutions and good people," Kriek says.

The debate around land reform is one of the most heated in recent times, with Parliament still in the middle of a process to determine whether or not constitutional amendments are necessary. AgriSA – who represents more than 27 000 commercial farmers and a membership of nine provincial bodies, 25 commodity organisations (like the Red Meat Producers Organisation) and 35 corporate members (including some of the biggest companies on the Johannesburg Stock Exchange) – has been criticised not only for seeking dialogue with government, but also for not having done enough to encourage land reform. Kriek would like to change both perceptions.

He grew up in Pretoria as the son of a respected political science professor of the same name and went on to complete a MSc degree in animal nutrition at the University of the Free State, where he currently serves on the university council. The Kriek children did not grow up thinking that their white skins made them better people and the young Dan's father explained South Africa's strange dynamics to him at an early age.

"I once asked him whether or not we were a democracy and he explained no, because only white people can vote."

The farming genes come from his mother's side of the family, and both her and his grandmother actively farmed in the Tweeling district. "My grandmother farmed alongside the Motholo family and they looked after her when she was farming alone. It made a great impression on me. They were dignified people for whom I had a lot of respect. The Motholos are now retired and their cattle still graze on my farm, where my team looks after them."

The relationship with the Motholos and his realisation that apartheid was unethical, immoral and indefensible were two things that shaped Kriek's view on society. "I grew up in a typical Afrikaner household. My great-grandmother on one side was a nurse in the Heilbron concentration camp while my great-grandfather was sent to a camp in Ceylon during the South African War. But the other side of my family were Bloedsappe (die-hard supporters of the more liberal South African Party) who did not fight in the war…"

Land reform cannot only be about economics

Kriek says any debate or discussion about land reform or restitution or property rights cannot have only economics as its point of departure. There needs to be an acknowledgement of historical injustices. And that's exactly what he told Ramaphosa when they met in one of Parliament's committee rooms last month.

"I looked at him and I said: 'AgriSA and farmers understand and acknowledge the devastating effects of colonialism, the 1913 Natives Land Act and apartheid on black South Africans' lives.' He looked up and asked me if that is what I genuinely believed, and when I said, yes, I do, he added that we need to repeat it where we can because if we don't address the issue we will not have stability."

Land reform is every South African's problem, Kriek believes, not just those in agriculture or in government. "The skewed patterns of land ownership lead to people not trusting each other, and when the economy suffers like at the moment, social cohesion is also tested. On one side, there is widespread frustration among black South Africans that land reform has not delivered results, and on the other, I have never seen such uncertainty in agriculture as there is now."

The political question must first be solved before the economic question can be addressed, he believes. "That means it cannot be a zero-sum game where you merely replace a white farmer with a black farmer. We need to place black farmers on the same developmental path their white counterparts were put on. It isn't rocket science. We have everything we need, but we do require dialogue, cooperation and trust." Dan Kriek, president of AgriSA, says for land reform to work, there needs to be dialogue, cooperation and trust between government and organised agriculture. (Photo: Willem Law/Netwerk24)

Kriek told Mabuza after the recent land summit in Bela-Bela, Limpopo, that after agriculture's attempts to reach out government will not be able to turn around and say that there isn't a willingness, ability and commitment from farmers to be partners in land reform. "We are progressive, we want to transfer skills and we want to take hands."

But previous efforts have come to nought and plans agreed to by organised agriculture have almost never been implemented by government. The land reform and constitutional amendment process is also seemingly a process driven by politics and special interests – what makes this different than other instances of rapprochement?

Kriek acknowledges this: "We've always had good relations with the ANC and government, but efforts by our previous president (Johannes Möller) weren't met with commitment from government; there wasn't a great appetite to work with us. And yes, I think we'll be in a holding pattern until the election."

An inflection point in history

He does however believe that South Africa has reached an inflection point in its history and that dialogue and negotiation and talking about the country's original sin is imperative.

"Our Constitution is a transformative document, it's not about retribution. The debate cannot be about taking out white farmers and putting black farmers in their place. That narrative will force people into corners. The art of leadership is to coax people who are in defensive positions closer to each other; it is to get people who are uncertain, fearful and threatened to walk forward."

Kriek, who on Tuesday will be up for re-election as president of AgriSA at the organisation's annual general meeting, is adamant his organisation is purely representative of commercial farming interests. "When I open my mouth it is not on behalf of Afrikaners, or whites or Afrikaans… I represent an economic sector where small and large-scale farmers play an important role."

The future of this country, and the future of land reform and restitution, will not be determined by those on political fringes, but by moderate South Africans who want to take the country forward, Kriek says.

"Farmers' unions need to reach common ground, we need government support and a new implementation system, including a financing model. But we don't have much time to get it right. We need results."

We live in a world where facts and fiction get blurred
In times of uncertainty you need journalism you can trust. For only R75 per month, you have access to a world of in-depth analyses, investigative journalism, top opinions and a range of features. Journalism strengthens democracy. Invest in the future today.
Subscribe to News24
Related Links
Ramaphosa's 'killings of white farmers' comment: What the president meant
Not all land will be expropriated without compensation – ANC
Land reform's Codesa moment
Next on News24
Alan Winde: I've got big shoes to fill